State legislators from both parties recently started more active discussions on what can be done about youths stealing cars across the state, a problem that’s festered for years.

In a related development, state Rep. Terrie Wood told constituents Thursday afternoon that she’s joined other lawmakers in petitioning for a special session of the state Legislature to address the problem.

The recent death of a runner in New Britain, reportedly struck by a stolen car driven by a 17-year-old with a long criminal history, prompted a GOP news conference on the problem Wednesday morning, and then the meeting of lawmakers from both sides of the aisle that afternoon, according to a report Thursday on the CT News Junkie website.

The report also said: “A bipartisan group of lawmakers emerged from a closed-door meeting at the state Capitol Wednesday with plans to pursue policies aimed at reducing youth crime including giving judges more information on the criminal records of repeat offenders.”

The Democratic and Republican lawmakers said they “identified some limited common ground,” as the article described it. A special session of the Legislature may be convened over the summer, House Speaker Matt Ritter said.

State Rep. Terrie Wood said she was joining other GOP legislators in calling for a special session of the Legislature this summer. Republicans had discussed the issue during the regular session this year.

“Most of us agree we need to find a better balance between intervention (programs, more parental involvement, etc.) and accountability, which will give the police and the court system the ability to protect the public,” Wood said.

According to the news article, one police chief said car-stealing youths have often been caught, but then get released without much consequence, then go on to offend again.

Darien police officials over the years have made the same complaint.

On the back of Darien Police patrol cars: “Lock your car. every time. Everywhere.”

Multiple Darien police chiefs have said over the years that youths almost always steal vehicles left unlocked, parked outside overnight and with the keys inside them.

Here’s the full text of Wood’s announcement, emailed to constituents. The email received by Darienite.com was sent at 4:20 p.m., Thursday:

The car break-in crisis by juveniles continues at a rapid pace in communities across Connecticut. This is an update on how we plan to address this key public safety issue.

Yesterday, legislators held a press conference in Hartford with local police chiefs and municipal leaders. Most of us agree we need to find a better balance between intervention (programs, more parental involvement, etc.) and accountability, which will give the police and the court system the ability to protect the public.

Following the tragic death of a New Britain man last week and a shooting at a Glastonbury home, both linked to vehicle theft by juveniles, there is no question that a timely and effective solution is needed. We must act now for the safety of our citizens, law enforcement, and residents across Connecticut who are saying enough is enough.

In order for us to take action, the legislature must convene for a special session. This can be done in a few ways. The governor may call us in for a vote, or a majority of legislators from each chamber may petition the Secretary of the State.

I joined my House Republican colleagues in petitioning the SOTS [Connecticut secretary of the state] for a special session. House leaders have begun discussions on potential legislation, and we are hopeful that a bipartisan agreement is reached in short order. Our goal here is to keep everyone safe. 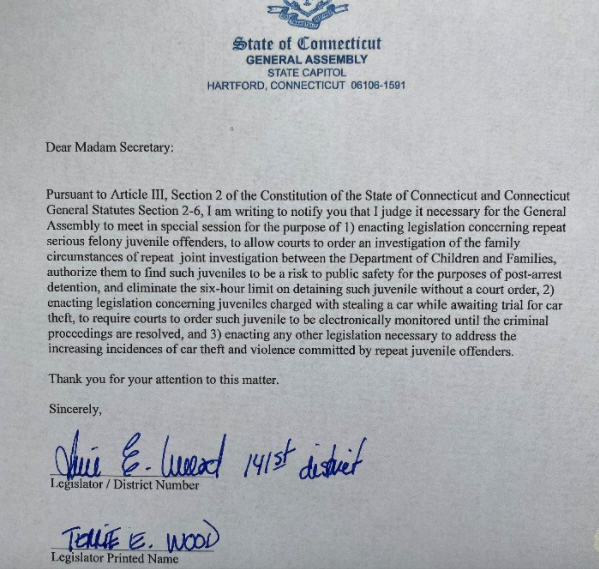 Image from Wood's email to constituents

Woods included this image of her petition letter to the Connecticut secretary of the state to have the Legislature convene for a special session on the issue.