With a formal land-use application to locate a Shake Shack restaurant at the former site of Chuck’s Steakhouse at 1340 Post Road, more details about the proposal have now come out.

Owners of the chain and of the property have said they hope to get the restaurant up and running by late summer or early fall.

The application was filed by Baywater 1340 BPR, LLC, an affiliate of Baywater Properties LLC, an owner of a number of downtown commercial properties and headed by David Genovese. According to the formal application, the restaurant would have: 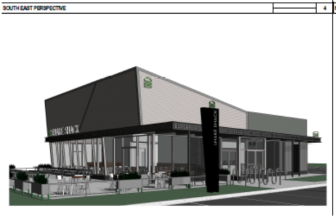 Rendering of the proposed Darien Shake Shack (from the original presentation) 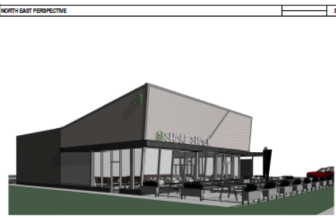 Another angle showing the Shake Shack proposed for Darien (contributed; from the original, informal presentation)

During an informal presentation about the proposed restaurant location before the Planning & Zoning Commission in early November, the size of the proposed signage came up as a possible point of contention with the board.

Shake Shack locations are designed with signs having letters 24 inches in height, but Darien zoning regulations require no more than 10-inch-high letters, although variances are granted if a hardship can be shown. 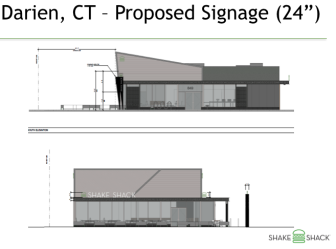 Views of the proposed Shake Shack building on the Post Road (from the original presentation).

There would also be a “band of letters” on the building (the side wasn’t specified in the proposal) that would be 8 inches high “along the edges of the canopy on all four sides” of the building.