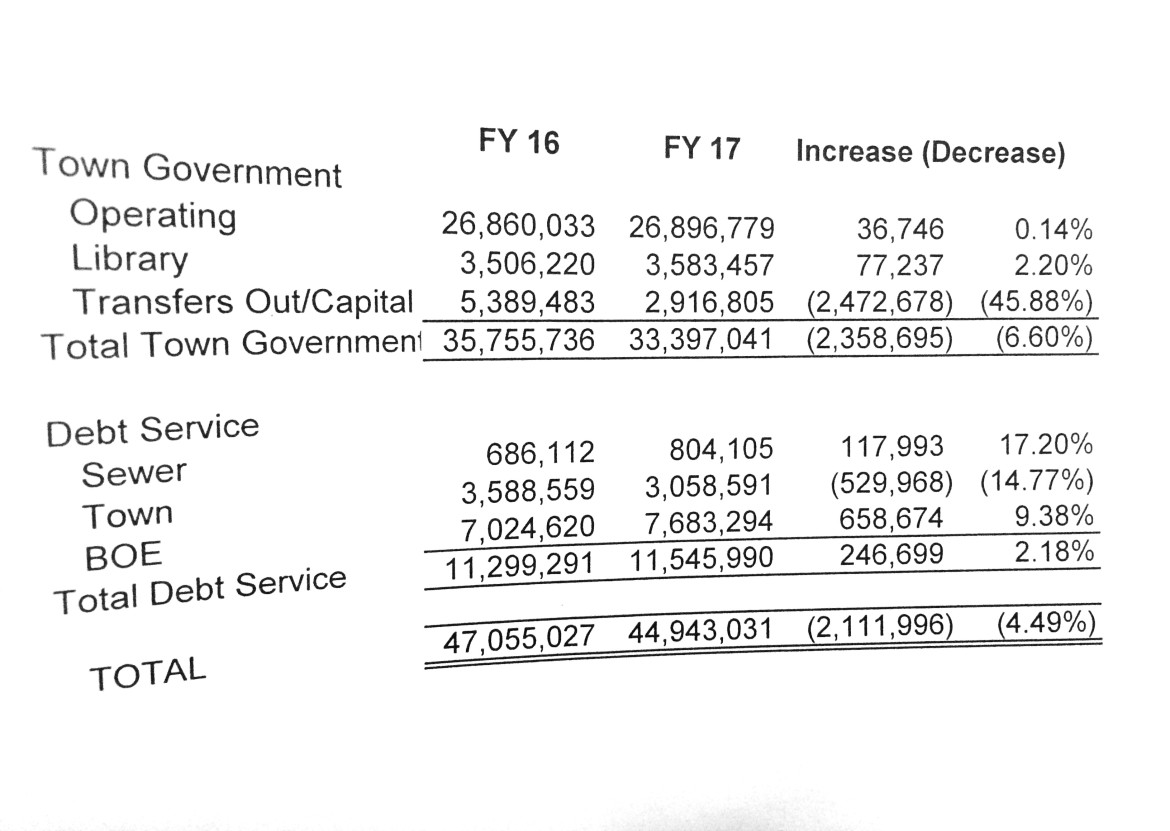 What spending looks like in various categories of the Board of Selectmen's proposed budget for the 2016-2017 fiscal year.

The Board of Selectmen on Wednesday unanimously approved a 2016-2017 budget for town departments, capital projects and debt service that would lower next year’s overall spending (except for school spending) by 4.49 percent.

The selectmen’s spending plan — a total of $47 million — does not include the Board of Education budget, which is about two-thirds of all town spending. That budget, just passed Tuesday night, proposes an increase of 3.44 percent in education spending.

The education and selectmen budgets now go before the Board of Finance and the Representative Town Meeting for final approval. Those bodies will consider the 1 percent rise in the town tax base that will be used to calculate the rates for town property taxes and other local taxes.

Spending on town departments which the Board of Selectmen directly oversee would rise by 0.14 percent next year, to $26,86,779. The town would spend $2,472,678 less in the “Transfers Out/Capital” part of the budget, an area that includes bonding for new capital projects and contributions to “post employment benefits fund” accounts, Town Administrator Kathleen Buch said. 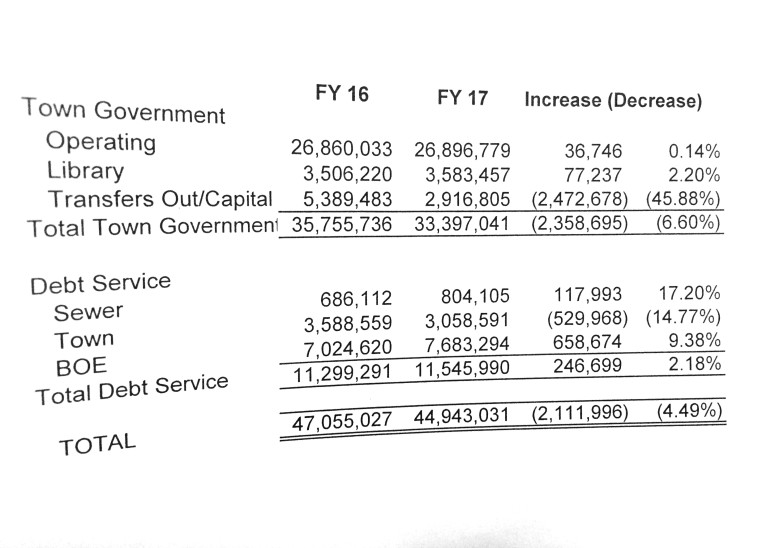 A document that Town Administrator Kathleen Buch handed out: What spending looks like in various categories of the Board of Selectmen’s proposed budget for the 2016-2017 fiscal year.

The budget also includes a grant of $3,583,457 to operate Darien Library, an increase of $77,237 (or 2.2 percent). No spending was cut for the library (although a downward adjustment in the budget was made for a retirement fund contribution that turned out to be less costly than expected).

Library Director Alan Gray, who attends all the budget hearings, thanked the board after the meeting.

First Selectman Jayme Stevenson said the proposed spending plan is a “very reasonable budget,” and she thanked Buch and new Finance Director Jennifer Charneski for “an outstanding process and for really asking the tough questions of department heads.”

Buch told Stevenson that town department heads “listened to your directive [on controlling spending] and brought in very reasonable budgets.”

On Monday, the Board of Selectmen rejected a proposal from the Police Department to get body cameras for officers to wear. The camera system proposed would cost the town $87,142 in the first year and an ongoing annual cost of $68,544 for the next four years, mostly for data storage.

“It’s not that we don’t believe that someday we’re going to need them,” Stevenson said of the cameras. She and the board thought that “we just don’t need them this year,” she said.

Police Chief Duane Lovello has the option to go to the Board of Finance to try to get the money put back in the budget, Stevenson said.