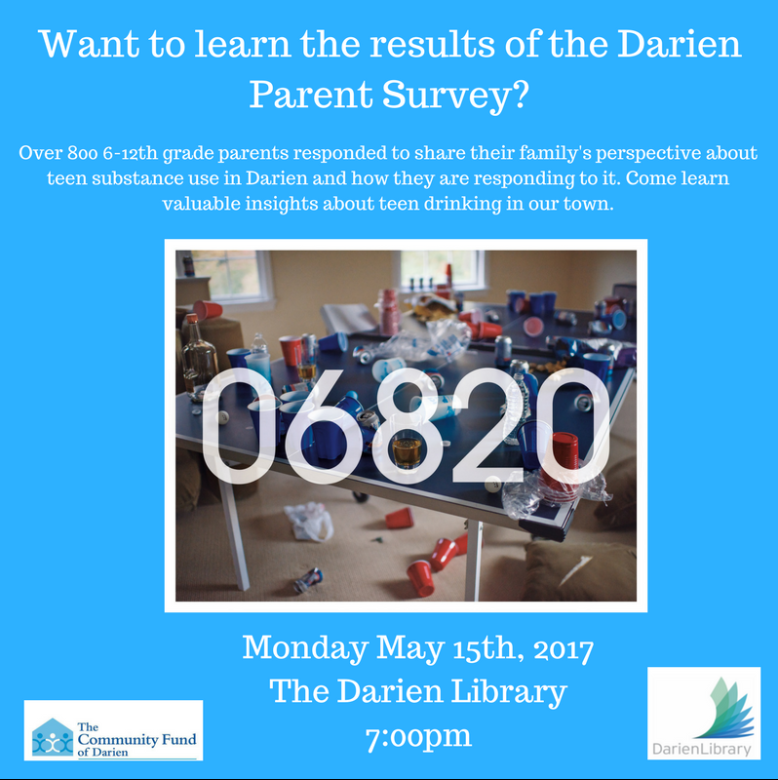 Nearly 800 Darien parents of students in Grades 6 to 12 completed a survey last year about teen substance abuse, an on Monday night, the results will be presented.

You’re invited to find out about the results at 7 p.m., Monday, May 15 in the Community Room of Darien Library.

Since 2008, Darien’s Thriving Youth Task Force has been surveying Darien 7 through 12th graders to assess their developmental assets and participation in risky behaviors.

In 2016, for the first time, the task force surveyed Darien parents, as well. The parent survey, sent out through the Superintendent of Schools Office, assessed their perspectives, knowledge and attitudes regarding risky behaviors, specifically teen alcohol and drug use.

According to an announcement from the Thriving Youth Task Force, the parents’ answers in the survey showed “their family’s perspective about teen substance use in Darien and how they are responding to it.”

The Darien Library is cosponsoring Monday night’s event with the Community Fund of Darien., which created the Thriving Youth Task Force.

“Join us to learn about the strengths Darien parents possess, the gaps between parent perception and the reported student reality and what are the top three areas for growth for parents in our community,” said an announcement from the library.

This is a presentation for parents with children of all ages and one you won’t want to miss! […]

Darien student data shows a trend of increasing binge drinking among our youth. Darien’s Thriving Youth Task Force has identified peer norms and family norms as the most significant risk factors in Darien related to our troubling rates of teen binge drinking.

In order to most effectively measure change over this grant period of five years, we are tracking not only student data but parent data related to norms, behavior and attitudes regarding teen substance use.

For more information, call Emily Larkin at The Community Fund of Darien at (203) 655-8775 or emily.larkin@communityfundofdarien.org