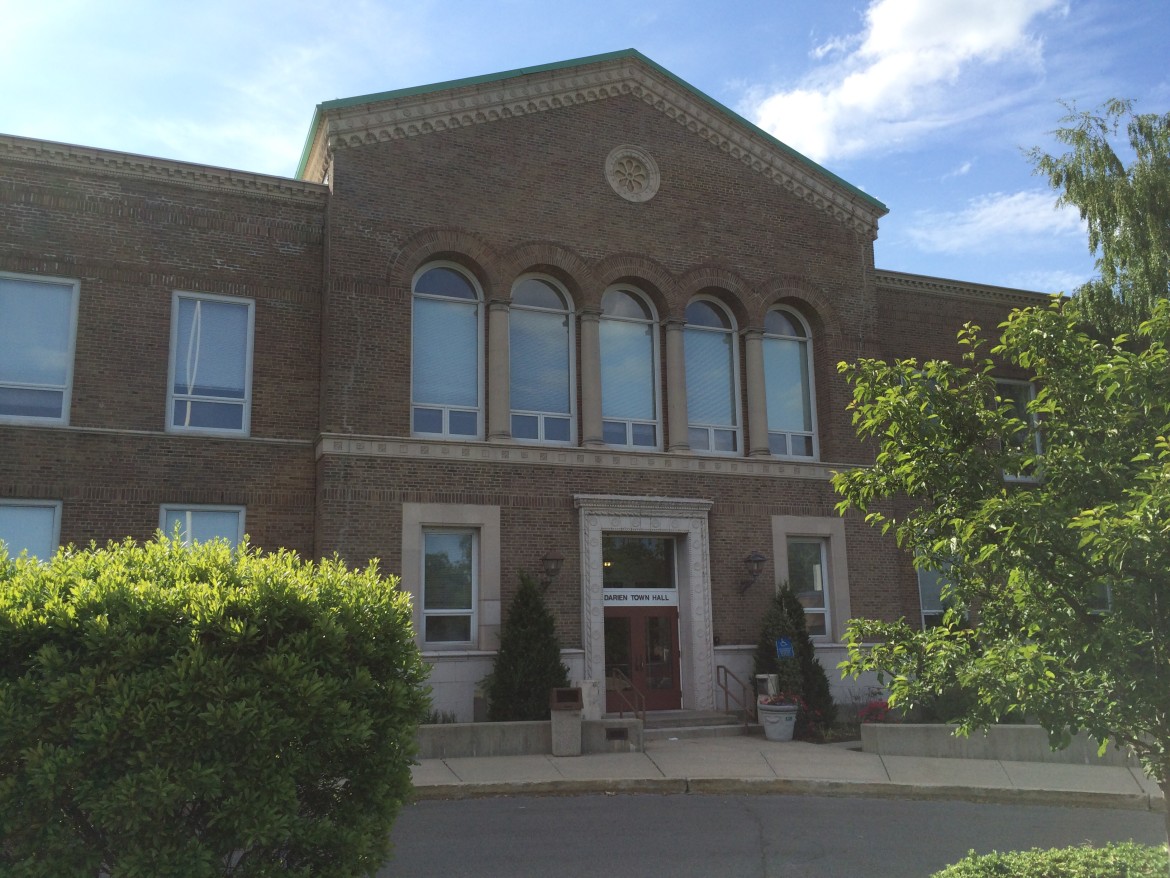 The Board of Finance had proposed a budget with a tax rate of $16.36 (11 cents under the present rate), and the final tax rate is 3 cents less than that. The RTM, with the legal ability to to cut budgets but not to raise them, is the final authority on cutting the budget and setting the mill rate.

The RTM voted overwhelmingly to cut various, relatively small items from the Board of Finance’s proposed budget, including financing to: repaint the tennis courts at Weed Beach that are nearest the entrance, remove money from Town Hall maintenance and refurbishing project accounts where money hadn’t been spent, kitchen equipment for the Weed Beach snack concession, and money for a ride-on leaf blower.

All the cuts came from the Board of Selectmen’s side of town budget. The Board of Education budget wasn’t touched, and some RTM members said that if the law allowed, they would raise the budget figure after cuts by the Board of Finance.

Various RTM members criticized the Board of Finance during the online Monday night meeting, with a common theme that the board wasn’t acting in a collegial spirit of cooperation with (some said) the RTM Finance and Budget (F&B) Committee or (others said) the Board of Education and especially Superintendent Alan Addley.

Finance Board Chairman Jon Zagrodzky has frequently called on town officials involved in the budget process to work together and promoted various ways his board could work more easily with other members by, for instance, having members of the F&B Committee ask questions during Board of Finance budget meetings and finding ways for department heads to spend less time at Finance Board meetings.

But in recent months, since the COVID-19 epidemic put new pressures on the current and upcoming spending plans for education and other town services, the Finance Board had pressed for cuts and deferrals in spending in order to help town taxpayers, some of whom are out of work.

The Board of Finance had aimed to have either a budget that kept overall town tax revenues (the tax levy) flat or the tax rate flat, and it wound up with a flat levy and a  cut in the tax rate.

At Monday night’s meeting, Jack Davis, chairman of the F&B Committee said his committee looked at that list of potential cuts for capital spending that the selectmen had already said could be deferred for a year and proposed making some of the cuts that the Board of Finance had declined to make.

In overwhelming votes, the RTM agreed to all of them.

Part of Davis’ justification for some of the cuts was that if education spending was being cut, then this or that item was an even riper candidate for defunding.

In May, Zagrodzky repeatedly said that his board has agreed that if the Board of Education, as it reviews its budget further in coming weeks, can’t find ways to cut spending that don’t hurt student’s education, they can make a supplemental budget request to the Board of Finance this summer, and that board will listen.

“Our sense is that there are plenty of items that can be cut,” he said.

Among the cuts F&B successfully recommended be made to the budget were some money in accounts that had been sitting around unspent, in some cases for years. Zagrodzky, who made a few comments during the RTM meeting, said the Finance Board was planning to systematically go through all those accounts this summer, checking with department heads to make sure the money wasn’t needed.

“There are a lot of complexities in these individual funds,” Zagrodzky said. “What I didn’t want to do is clean out these funds without close consultation.”

Davis said that removing the money from those accounts now could have resulted in fewer cuts to the Board of Education budget.

A $46,000 fence for the firefighter training facility at the town transfer station was also removed from the budget. The Board of Selectmen had it on its list of items that could be deferred a year, if necessary, and the Board of Finance had decided not to cut the money.

“F&B believes this is over funding.” Davis said. There was about half a million dollars in various Town Hall renovation financing accounts that wasn’t being spent, so the town should have enough money for those projects after the $100,000 cut.

Davis said that in budget deliberations he hadn’t heard a good explanation for why the town needed to buy a new riding leaf blower, paint some of the Weed Beach tennis courts or spend $25,000 for kitchen equipment in the Weed Beach concession stand.

The total cost for these three projects is about $72,000. Zagrodzky told the RTM that it would take about $100,000 to cut even a penny from the town tax rate.

Adele Conniff chair of the RTM Parks and Recreation Committee, said the kitchen equipment would allow the town to get competitive bids for the operation, now in the last year of a three-year contract with a vendor, who owns the equipment in the building now. (The concession stand has been closed during the COVID-19 epidemic.)

Members of the Park & Recreation Committee objected to the cuts. Sheila Sherwood said, “This year would seem particularly important to maintain our parks for everyone.” It was pointed out that demand could be higher on parks this summer because more people would stay in town rather than travel for a vacation.

Zagrodzky said the tennis courts would simply look shabbier, and the town has the money to make them look good. “I mean, we’re not broke,” he said.

Frank Adelman responded by saying, “I’m just struck by the double standard here.” He said the Board of Education and superintendent were “completely run roughshod,” by the Board of Finance on education spending, while tennis court painting was left in the budget.

F&B member Stacey Tie pointed out that the cut items “are not safety concerns, and that’s where we [on the committee] agreed we should go.” The F&B Committee voted unanimously to adopt the three cuts.

“Coordination between the Board of Finance and RTM was not as robust as in previous years,” Davis said.

“I do not think that the Board of Finance has done a great job,” RTM member Cheryl Russell said.

Theresa Vogt criticized Republican members of the Board of Education for meeting in a caucus and said that, as a majority of the Board of Ed, she expected them to ram through cuts in the budget rather than work collaboratively with other members and have a full discussion.

The caucus, Vogt said, “was a quorum, and at tomorrow [Tuesday] night’s Board of Ed meeting when specific line items are discussed which will impact our students, this quorum will be in lock step with their pre-determined majority vote.

“Transparency and healthy discussions should be the norm even if it means the meeting will last for hours.  We owe that to our taxpayers.  More importantly we owe it to our children.”

Vogt’s statement was cut off mid-way through (Darienite.com has published the full version here), after RTM member John Boulton objected that it was itself a partisan point and not directly on the subject of the budget. Moderator Seth Morton agreed. Other RTM members, including David Bayne, who is both an RTM member and the chairman of the Democratic Town Committee, didn’t sway Morton.

“I don’t think that the investment in our children, in our students, is enough this year, because of all the things that other people have said — about COVID, small classes, cleansing. I will not be surprised if we do not get the money we expect from the state that we expect. […]

“I’m very concerned about the lack of dialogue between the Board of Education and the Board of Finance,” she said.

Adelman and RTM Education Committee Chair Clara Sartori both made the point that the education budget was cut just as the district expects to be spending more money to deal with the effects of the COVID-19 epidemic.

Nobody at the RTM meeting mentioned that the Board of Finance has said it would approve additional expenses for education and other town agencies for COVID-19 activities after the details of those spending proposals are finalized. Zagrodzky also said that the Finance Board would authorize more education spending if the Board of Education demonstrated that it couldn’t make further cuts without degrading the quality of education for students.

The Board of Finance got some support from some members of the RTM:

John Boulton: “I find this disturbing, the way that the F&B Committee is operating here. These are very unusual circumstances. […] I’m troubled by the way F&B is approaching this.”

Cheryl Russell: “I do think that the Board of Finance has done a great job, and I do think that F&B is stepping over bounds […] to have F&B come in here at the 11th hour and coming up with cuts to the capital […] account.”

“It should be noted that the [F&B] Committee recognized the good work of the Board of Selectmen, speaking with their department heads, to identify $750,000 of potential Board of Selectman [budget] requested capital deferrals.

“We were equally disappointed that at no time were the items not specifically given back by the Board of Selectmen discussed at any Board of Finance deliberations.

“Additional deferrals could have meant lower cuts to the Board of Ed and the Board of Selectmen operating budgets.”