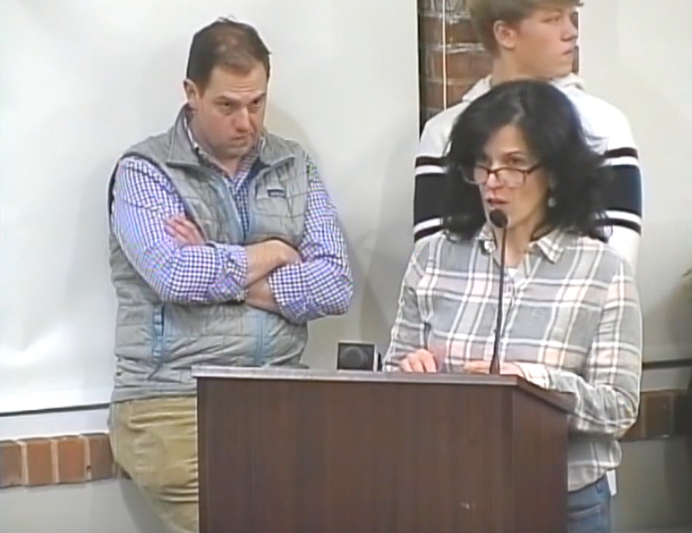 During a contentious Representative Town Meeting discussion Monday night, RTM Member Theresa Vogt’s comments criticizing partisanship on the Board of Education was ruled out of order by the moderator, Seth Morton, for bringing partisanship into the RTM and for not being close enough to the topic (the budget).

Vogt and others, including David Bayne, who is both an RTM member and the chairman of the Democratic Town Committee, didn’t sway Morton, so Vogt didn’t get to read her entire comment, the end of which addressed actions on the Board of Finance. Others in the meeting made much shorter versions of similar comments.

Since it appeared that she had prepared her remarks beforehand, and since her arguments competently address an important topic, Darienite.com was able to ask her for it, and here it is: 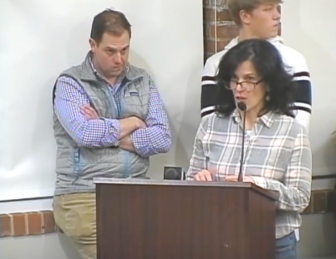 I would like to discuss partisan behavior, the lack of transparency, and the behind the scenes communications of certain Board of Ed members, as well as public comments that I found condescending toward the school administration and Darien taxpayers made by the chair of the Board of Finance.

My personal philosophy regarding the education of our students has been informed by years of volunteer work in the classroom with our teachers as well as working directly with the administration as a PTO chair, PTO executive board member and RTM Education [Committee] member.

Up until this year, the Board of Education has worked collaboratively across party lines to achieve exceptional outcomes for all our students as well as supporting our teachers and administrators.  Unfortunately, this year’s process has been derailed by blatant partisan behavior that has negatively impacted the budget.

In my opinion, there should be no room for partisan behavior when the town creates a budget to meet the needs of our children.  When a parent attends a Board of Ed meeting, they should not be able to identify the political affiliation of each member.

For the first time in the five years I have been attending BOE meetings I witnessed partisan behavior supersede the best interests of our children.  During a February Board of Ed meeting during public comment, I went on record to express dissatisfaction with that behavior at prior meetings.

Last week, five Republican members of the nine-member Board of Education met to discuss what they plan to cut from the budget. Despite hiding behind the term “caucus,” their actions violated the spirit of Robert’s Rules of Order.

It was a quorum, and at tomorrow [Tuesday] night’s Board of Ed meeting when specific line items are discussed which will impact our students, this quorum will be in lock step with their pre-determined majority vote.

Transparency and healthy discussions should be the norm even if it means the meeting will last for hours.  We owe that to our taxpayers.  More importantly we owe it to our children.

The Board of Finance.  Two meetings stand out.

At the May 12 Board of Finance meeting, the chairman [Jon Zagrodzky] opened his remarks by criticizing CDSP and the roughly 250 letters he received in support of the school budget, insinuating that they were not genuine and did not reflect the concerns of Darien taxpayers.

Over 250 taxpayers voiced their opinion as is their right in a democracy to critique elected officials who are implementing a policy or budget they disagree with.  The Board of Finance ignored and dismissed their concerns.

At their May 14 meeting, I watched as the chairman condescendingly addressed the Superintendent implying that the Administration’s recommended strategies to meet the Board of Finances cuts was not up to par.

While not in their purview, the Board of Finance highlighted line item cuts to the operating budget that they are not legally empowered to suggest or denote. Lastly, our superintendent should be treated as an equal partner in the most important process undertaken in this town every year.

Not one stakeholder in this budget  process, be it an elected official, employee or taxpayer should feel their voice is not heard or not valued.  I know and hope Darien can do better than this as we move forward.