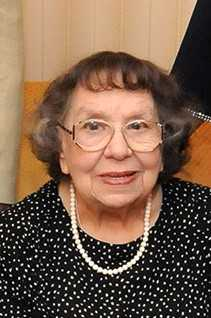 Rose Warren, 94, died Aug. 5. Her wake is scheduled for Thursday, her funeral for Friday.

Rose worked as a secretary in a law office; a receptionist and laboratory assistant in several doctor’s offices; and as a medical transcriptionist for Stamford Hospital. She also spent incalculable hours working as a volunteer at St. John Roman Catholic Church and the Darien Senior Center.

She taught numerous people how to do a seemingly endless variety of crafts including painting and stained-glass work. Her ability to create beauty from things most people would never give a second thought to was legendary and ensured that anyone who spent time with Rose would always come away with a treasure and a wealth of stories to tell.

It never occurred to Rose that someone was either too young or too old to enjoy a creative experience, so anyone that came into her home or her class would come away excited and ready to create more.

Amid all her other passions nothing could keep her away from UConn Women’s Basketball. When her team was playing everything else was put on hold and all sorts of snacks would appear. She and her friends would watch and cheer with a passion that led the uninitiated to truly believe the team could hear them through the television.

Rose was predeceased by her husband Joseph, her mother Anna Ferullo Lombardo, her father Dominick Lombardo, her brother Nicholas Lombardo, and one grandchild Keith Richard Deverill.

The family will receive friends from 4 to 7 p.m., Thursday, Aug. 10 at the Edward Lawrence Funeral Home, 2119 Post Road, Darien. A Mass of Christian Burial will be held at 11 a.m., Friday, Aug. 11 at St. John Roman Catholic Church (address below). Interment will be private.