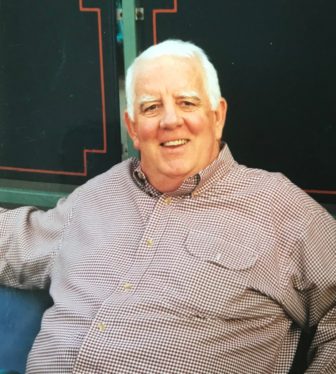 Raised in both Shaker Heights, Ohio and then Glenview, Il., Bob was the son of William Hunter Russell and Harriet (Purves) Russell. A young man with bright auburn hair, he was known to many by the moniker “Rooster.”

At Glenbrook North High School Bob was an outstanding athlete and played varsity baseball for four years, among other sports. He also played baseball for the University of Arizona between 1960-1964.

A natural leader with excellent interpersonal skills, he was the catcher of his baseball team and the President of his beloved Sigma Alpha Epsilon (SAE) house.

After college, Bob moved back to Chicago where he started working as a young sales associate in commercial printing. This early work was sidetracked when he served as an officer in the Navy and completed one tour of duty in Vietnam in 1965.

Bob returned safely from his service to continue what became a long and very distinguished career first, at R.R. Donnelley and Son’s Co. until 1988, and then Quebecor World until his retirement in 2004.

He not only worked hard and took great pride in his business success, but he truly loved the friends he made throughout those years. He also notoriously launched the careers of many other young printers who were mentored by and greatly admired Bob.

Bob and Susan were married in 1966 in Northbrook, Il. and moved to Darien in 1974, when Bob was transferred to Donnelley’s New York office. Bob was an active member of the Darien Boat Club where the young Russell family sailed their Rhodes 19 every Sunday, prior to trading it in for a Grady White in his later years.

Bob was also a longstanding member of the Country Club of Darien where he served on the membership committee and enjoyed close to 25 years of Saturday morning rounds of golf and Thursday night card games in the men’s locker room.

A loyal Cubs and Bear fan, Bob held onto season tickets to both teams for years after moving to New York, and passed on peacefully knowing that his Cubbies were finally world champs.

He leaves behind his high school sweetheart and wife of 51 years, Susan (Smith) Russell; his son, RK Russell, Jr. of Norwalk; his daughter, Emily Russell Askin and her husband Patrick Askin of Philadelphia. He also leaves behind two adoring granddaughters, Annita and Bridget Askin; and his older brother, William Purves Russell of St. Charles, Il.

In lieu of flowers, donations can be mailed to the following charities in Bob’s honor: