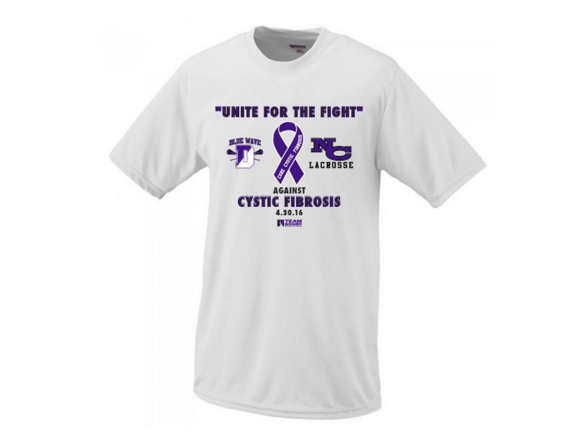 Players on the Darien and New Canaan high school boys lacrosse teams will be opposed on the field this coming Saturday at 1 p.m., but they’re uniting to support awareness of cystic fibrosis, and members of both teams will be wearing “Unite for the Fight Against CF” t-shirts to school on Friday. 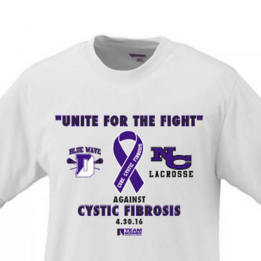 Closeup of the “Unite for the Fight” t-shirt

Saturday’s game at Darien High School stadium will be dedicated to the teams’ “CF Awareness Day.”

“This year, one of the initiatives of the Darien  boys’ lacrosse team is to raise awareness for Cystic Fibrosis,” Mo Minicus, a coach at Darien High School, wrote in a recent email.

“When we reached out to New Canaan to tell them what we were doing for the game, they immediately jumped on board to help raise awareness. Hence, the title of the day became ‘Unite for the Fight.'”

She continued: “As a show of support, ‘Unite for the Fight Against CF’ t-shirts will be worn by every member of the boys’ lacrosse program (grades 9-12)  to school on Friday, April 29 and during pregame.  New Canaan will be doing the same.”

The t-shirts will be for sale, along with baked goods, with proceeds going to the Boomer Esiason Foundation.

“Danny Porcelli, from Vavala’s Deli which runs the concession stand, was more than willing to help with our cause,” Minicus wrote. Proceeds from all sales of Italian ices that day also will be donated to the foundation.

What Cystic Fibrosis Is

Here’s how the Cystic Fibrosis Foundation (not connected with this event or campaign) describes what CF is (see this Web page for the full description):

Cystic fibrosis is a life-threatening, genetic disease that causes persistent lung infections and progressively limits the ability to breathe.

In people with CF, a defective gene causes a thick, buildup of mucus in the lungs, pancreas and other organs. In the lungs, the mucus clogs the airways and traps bacteria leading to infections, extensive lung damage and eventually, respiratory failure. In the pancreas, the mucus prevents the release of digestive enzymes that allow the body to break down food and absorb vital nutrients. […]

Cystic fibrosis is a complex disease and the types and severity of symptoms can differ widely from person to person. Many different factors, such as age of diagnosis, can affect an individual’s health and the course of the disease.

About the Boomer Esiason Foundation:

Living with cystic fibrosis (from the Cystic Fibrosis Foundation):