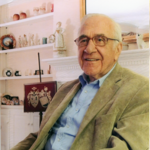 Richard (Dick, “Gamps”) Lindabury Berry died peacefully at home with his family on August 18, 2016 in Darien, Conn. He was 91. Lois Boots Berry, his wife of nearly 64 years, survives him.

He attended the Short Hills Country Day School; and graduated from the Choate School (1942) and Princeton University (class of 1946). During World War II, Dick served as an ensign in the Navy as a communications/signals officer in the North Atlantic.

At the end of the war and following his graduation from Princeton, he moved to Seven Gates Farm on Martha’s Vineyard to restore his grandparents’ house on Indian Hill in West Tisbury. The Berrys’ Martha’s Vineyard roots trace to the post-Civil War period.

His true loves, apart from his family, were gardening and furniture refurbishing. He was a member of the Darien Beautification Commission. He enjoyed wrestling his 1960s Gravely tractor through underbrush, notwithstanding a near fatal encounter with a yellow jacket hive.

Dick was very close with his immediate family, and his wife, children and grandchildren were the love of his life.

In addition to his wife, Lois, he is survived by his son, Richard Kingsley Berry and his wife Carla Clay Berry of New Rochelle, N.Y., and their children Matthew, Eliza and Susannah Berry; Virginia Berry Ouellet and her husband Richard P. Ouellet of Seattle, Wash.; and Lois Berry Meyer and her husband Jeffrey S. Meyer of Darien and their children Caroline, Allie, Mallory and Kendall Meyer.