The AAA Foundation’s latest Traffic Safety Culture Index reports 85% of drivers view red-light running as very dangerous, yet nearly 1 in 3 say they personally blew through a red light within the past month when they could have stopped safely.

“We seem to be a ‘do-as-I-say-not-as-I-do’ society when it comes to red-light running and other traffic safety issues,” said Fran Mayko, AAA Northeast spokeswoman. “Realistically, police can’t be at every intersection.”

How Many, What Cost 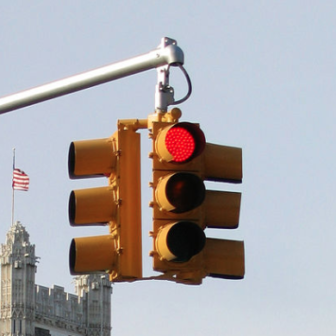 Additional data obtained through the UConn Crash Data Repository reports red-light runners in the Nutmeg State caused more than 9,000 crashes since 2015, a figure that equates to more than five crashes a day.

“Red-light running continues to be a traffic safety challenge for law enforcement and others who share the road,” Mayko said. “And drivers who decide to run red lights when they could have easily stopped safely are making reckless choices that puts all road users in danger.”

Ideas to Reduce It

Enforcement is the best way to get violators to comply with the law, Mayko said.

Connecticut doesn’t allow for automated red-light enforcement. AAA believes automated enforcement can improve safety. When properly implemented, red-light cameras reduce the fatal red-light running crash rate in large cities by 21% and the rate of all types of fatal crashes at intersections with signals by 14%, the Insurance Industry for Highway Safety reports.

“However, AAA wouldn’t support red-light camera systems that only raise revenue for municipalities without any corresponding traffic safety benefits,” said Mayko. In Connecticut, automated enforcement has been debated in the state legislature over the years, but never been brought to a vote.

Red-light violations are considered infractions in Connecticut, with convictions resulting in hefty fines. Points are also added to driving records, if violators are convicted. Sometimes, however, red-light violations can lead to reckless driving charges and, if the offense results in the death of another, vehicular homicide charges are possible.