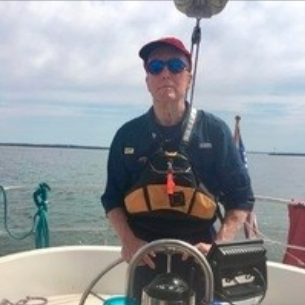 Rande Wilson, 67, passed away on May 11. A private service will be held at a later date.

Rande James Wilson, 67, passed away at home in Darien on May 11, 2020, at age 67 in the company of his loving partner Eautha Munkelwitz.

Rande Wilson, 67, passed away on May 11. A private service will be held at a later date.

Born born July 1, 1952, in Kenosha, Wisconsin, Rande attended Plymouth High School in Michigan. He graduated with honors from Michigan State University with a degree in environmental science and earned his MBA from Anna Maria College in Massachusetts.

Rande was an accomplished mariner, serving as a coxswain in the United States Coast Guard Auxiliary Flotilla 72. He was a public affairs specialist and was stationed in New Orleans for the Deepwater Horizon incident response.

He held his Master Captain’s license and was affectionately known as “Captain Rande” by friends and family. Rande was an instructor at the State University of New York Maritime College and Landfall Marine Training Center, operated the research vessel at the Maritime Aquarium at Norwalk, and was on the board of directors at the Noroton Yacht Club where he raced Sonars.

His last years were spent aboard the Nonsuch 30 sailing-vessel “Naiad” with his faithful partner and co-captain Eautha who dedicated her life to him and their adventures together.

Rande James is survived by his father — a World War II Navy coxswain — Jean James; sons Matthew James (Luz) and Patrick James (Humberto); and three granddaughters, Estela, Emi and Mazzy, respectively. He was preceded in death by his mother, Fae, and sister, Kim.

He will be remembered for his “Rande Burgers,” storytelling on the back patio, and sense of humor. Captain Rande was a shareholder and lifelong fan of the Green Bay Packers and Michigan State Spartans. He was looking forward to reuniting in heaven with his golden retriever, Jake.

Rande generously donated his brain to neuroscience at Columbia University after a long battle with progressive supranuclear palsy (PSP). A private service will be held at sea in Long Island Sound with his family.

— an obituary from the Thomas M. Gallagher Funeral Home