After ashes from a fire pit were put in a shed on the property of a house on Alpine Lane, the shed caught on fire late Saturday night.

No one was injured, and Noroton Heights Fire Department firefighters put out the flames. 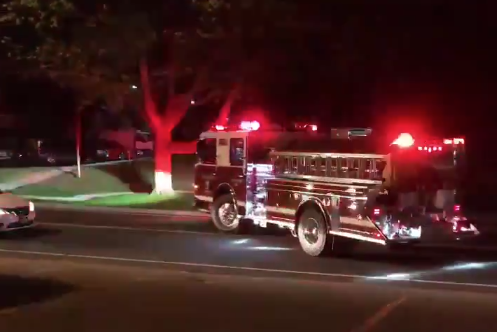 Image from a video by Noroton Heights Fire Department on Twitter

Noroton Heights Fire Department engine leaves the station Saturday night on its way to the fire.

The shed fire was reported to police and the fire department at 11:40 p.m. on Saturday, May 5.

When police arrived at 10 Alpine Lane (a block east of the Middlesex Club and a few blocks north of Holmes School), the 10-foot-by-10-foot shed was already engulfed in flames.

A neighbor told police an explosion was heard before the flames were seen.

Although the town Fire Marshal’s Office officially determines the cause of fires in town, police pointed out that ashes from a fire in a fire pit had been placed in the shed. (See sidebar below for safety tips about fire ashes.)

Lawn equipment and toys in the shed were damaged, and the heat also damaged  a fence and some plantings.

#NorotonHeightsFD departing the #firehouse Sat night, on a call for smoke in a structure #engine23 #tanker22 pic.twitter.com/lmE55K95DK

The following article was published by NewCanaanite.com in 2014:

Embers can remain active in ashes for up to five days after a fire dies down, and even then should only be removed into a metal container with tight lid for safe disposal, New Canaan fire safety officials say.

Connecticut already saw one fire caused by improper disposal of fireplaces ashes, and this “happened when ashes from a woodstove were placed outside, adjacent to the foundation of the home which ignited the homes siding,” New Canaan Fire Marshal Fred Baker said.

“The good news is, the family was alerted by a smoke detector and they made a safe escape,” Baker said. “However, their home suffered moderate fire damage and may be uninhabitable for some time.”

“As you may recall the horrific Christmas morning fire in Stamford [several] years ago was caused by improper disposal of fireplace ashes,” Baker said. “Please be safe for your family’s sake.”