A Darien woman was scammed out of $9,000 through a more sophisticated scam than usual, involving a caller who convinced her to download a program to her computer.

On Tuesday afternoon, Oct. 24, the woman, a Long Neck Point Road resident, told police she believed she had been scammed.

She said that she had received a phone call from a male (when the call came, police didn’t say). The male said he worked for a subsidiary of Microsoft and that his company owed her money as a reimbursement for computer software she had bought.

In order for her to get her money back, the caller said she should download a certain computer program called “Any Desk” (the program that allows someone else access to your computer, something that can be proper and useful in certain circumstances, such as getting technical support for problems on your laptop).

The scamming possibilities of Any Desk software were identified years ago. Here’s an image of part of a Web page on the Any Desk website that discusses the problem and Any Desk’s solution, involving a scam notice that was either disabled or just didn’t work in the recent Darien case: 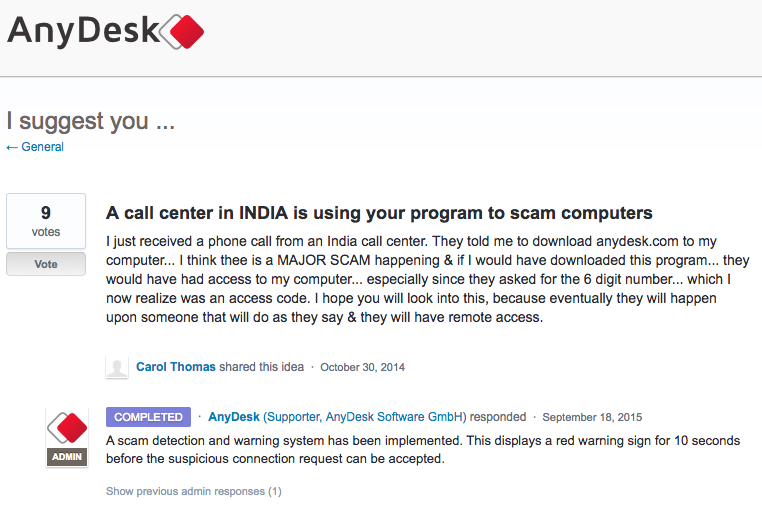 Image from part of a Web page on the AnyDesk.com website

Don’t let a stranger do this to your home computer or digital device. The post is from Oct. 30, 2014 — three years ago.

The caller instructed the victim on how to download the program, telling her that would allow him to guide her through the reimbursement process.

That, it turned out, was the equivalent to giving him access to her bank accounts.

As the male (police didn’t say whether it was a man or possibly a teenage boy) was explaining to her how the money would be transferred, he was already taking money out of her accounts in a way that somehow made it look as if a deposit had been made. (Police didn’t describe what that looked like or what was involved in doing that.)

The caller stated he would be over-depositing, and that she would need to refund him $9,000.

As the police announcement put it:

“After reviewing her account, the victim realized no deposit had ever been made to her account and she had deposited her own money into the caller’s account.”

The Darien police investigation is ongoing.

The Darien police announcement gave this advice to the public about similar schemes: