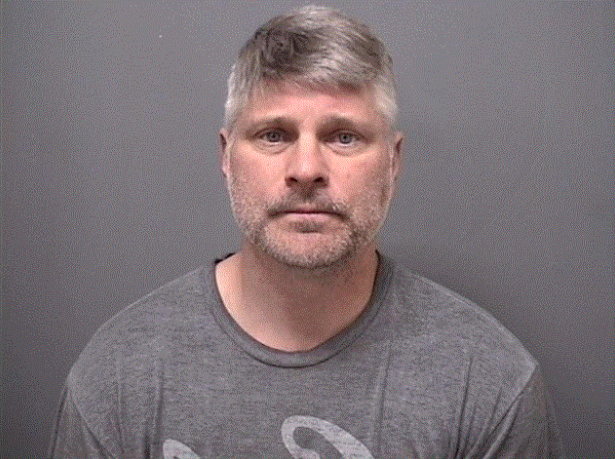 Arrest photo of Brent Moyers, 50, of Lake Drive in Darien, charged with violating a protective order.

After he was charged with disorderly conduct in a domestic incident last month, Brent Moyers, 50, violated the terms of a standing protective order the same day and was later arrested for it, Darien police said.

Arrest photo of Brent Moyers, 50, of Lake Drive in Darien, charged with violating a protective order.

Brent Moyers of Lake Drive was originally charged after police were called to his home at 2:40 a.m. on March 20. Police were told Moyers grabbed and elbowed the victim at the home after getting into an argument with that person.

As Darienite.com previously reported: “The man denied he was in physical contact with the victim during what he described as a minor altercation. A Darien EMS-Post 53 ambulance was called and the victim was treated for minor injuries that police didn’t describe in the announcement.”

Later that same day, at 11:39 p.m., the victim told Darien police that Moyers, who was not allowed to contact the victim and had to stay away from the victim’s home as part of the order of protection, was seen pulling into a neighbor’s driveway close to the victim’s home, where he made eye contact with the victim.

According to the victim, Moyers also used a third person to communicate with the victim in violation of the order.

Darien police applied for an arrest warrant, which was approved by a prosecutor and granted by a judge. On April 1, Moyers turned himself in at Darien Police Headquarters, where he was arrested on a charge of violation of a protective order.

He posted a $10,000 court-set bond and was released. He is scheduled to appear April 2 in state Superior Court in Bridgeport, where Darien arrest cases have been going because of court closings in the state due to the COVID-19 pandemic.