A 21-year-old Darien man has been arrested after assaulting an Uber driver who had dropped him off on Tulip Tree Lane on Friday night, Aug. 27, police said.

“The Uber driver received minor injuries, for which he was later taken to a hospital, Darien police said. This video of the incident, recorded from within the car, was released and appeared on News 12. It shows the driver being punched and pleading with the man assaulting him:”

Police gave this account of the matter, including accusations not proven in court:

Shandaken Ford, who lives on the Post Road in the area between its intersections with Nearwater Lane and Beach Drive, was the first of two passengers being driven in an Uber car. When he was taken to an address on Tulip Tree Lane at about 11:30 p.m., he got out of the car and stood by the driver’s side window, where began arguing with the driver.

Arrest photo of Shandaken Ford, 21, of the Post Road in Darien, charged with breach of peace, third-degree assault and second-degree criminal mischief.

During the altercation, Ford also caused minor damage to the inside of the driver’s car. According to a report on News 12, the man left, then the driver got out of the car. The man returned briefly and began scuffling with the driver again, but soon left.

Police, investigating the incident further, determined that night that Ford had committed the assault. Police tried more than once to find him at his home. Officers did contact family members. 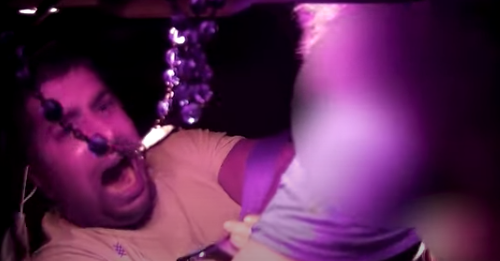 An image of the video, showing the Uber driver yelling between getting punched.

Police applied for an arrest warrant, which was submitted when state Superior Court in Stamford opened for business Monday morning. Judge William Clark approved the warrant on Wednesday morning. Police contacted Ford’s attorney, and Ford promptly turned himself in at Darien Police Headquarters.

The warrant charges Ford with third-degree assault, second-degree criminal mischief and breach of peace. He was released on a $5,000 bond and is scheduled to appear Sept. 13 in court.

Why It Took So Long: What the Police Chief Did and Didn’t Say

In addition to the news release, Darien police released a statement from Police Chief Donald Anderson. The chief said the incident is unusual for Darien, and the crimes in the accusation aren’t tolerated in town.

“I have read the many comments questioning why the accused was not arrested sooner, so please allow me offer my explanative comment here,” Anderson wrote.

“If the accused is not apprehended at the scene or in close proximity (in physical location and/or in time), the police are required to prepare and submit an arrest warrant application,” the police chief wrote. “An arrest warrant application was quickly generated and submitted for judicial review the first thing Monday morning following the incident.”

Arrest warrants are reviewed by both a prosecutor and a judge in order to get approval. In some cases, especially domestic violence incidents, the entire process takes place within hours, not days, even on a weekend.

(Approval of an arrest warrant application isn’t automatic: A prosecutor or judge can take more or less time to approve it.

(Either the prosecutor or the judge can refuse approval or can tell police that a better case needs to be made, and that additional work can take more time. The submission of a warrant application and any deliberation or discussion of it by police, prosecutor and judge are all done in private.)

In his statement, Anderson said the case was “properly, expeditiously and thoroughly investigated” by Darien police.

Police released this statement with the news release about the incident and arrest:

This fact pattern and set of circumstances contained in this incident are highly distressing to me and certainly not indicative of reasonable conduct. I have been closely monitoring the published news stories as well as the social media postings/online comments concerning this incident.

To be clear: This type of unprovoked behavior is certainly not in line with the beliefs and reasonable actions of virtually all Darien residents and visitors to our town and should not, and will not, be tolerated.

I have read the many comments questioning why the accused was not arrested sooner so please allow me offer my explanative comment here. The accused is now charged with misdemeanor criminal charges; in these types of cases, if the accused is not apprehended at the scene or in close proximity (in physical location and/or in time), the police are required to prepare and submit an arrest warrant application to a “neutral and detached magistrate.” That is exactly what occurred here.

I commend the officers involved for their professional and diligent work on this incident. It was properly, expeditiously and thoroughly investigated; an arrest warrant application was quickly generated and submitted for judicial review the first thing Monday morning following the incident.

Now that an arrest has been made, the incident rests in the hands of the Judicial Branch of government for potential prosecution and ultimate incident disposition.