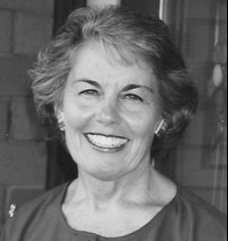 She and her beloved husband, Robert, lived in Battery Park City in New York. They had resided in Darien from 1969 until 1994.

During her years in Darien, Phyllis was very active in the YMCA, serving as a Red Cross volunteer life guard and swim teacher to both young children and adults.

Some of her other local memberships included the Newcomer’s Club, the Darien Community Association and the United Methodist Church, to name a few.

In New York, she did volunteer work at NY Downtown Hospital and was an active member of the Community Gardens in Battery Park City.

Phyllis Mevoglioni was born and raised in Paterson, New Jersey by her parents, Ernest and Ceile Mevoglioni.

She graduated from Eastside High School in 1949 and was a 1953 graduate of New Jersey College for Women, now known as Douglass College, part of Rutgers University.

Swimming was her passion. She was a member of a number of synchronized swimming groups throughout most of her life. Along with other members of Ridgewood Aquacons, she participated in Buster Crabbe’s swimming shows at the New York World’s Fair site.

Phyllis inherited the thrill of travel from her parents. She and her husband traveled extensively over the years, visiting all seven continents in the process.

A service for family members was held at the United Methodist Church in Darien. A memorial service also is in the planning stages.