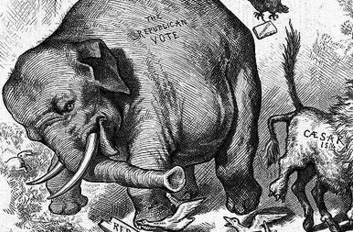 Selectmen Kip Koons and Susan Marks had sent messages to various people indicating that five candidates for re-election to the RTC should not be re-elected, and at the town GOP Caucus, where many Republicans came to cast their ballots, those five received the fewest votes, resulting in their removal from the committee as of March, when the newly elected committee’s term starts.

“The circulation of material specifically and negatively targeting individuals by name is inappropriate for our town,” the letter reads in part. “Its precedent contradicts the chief purpose of the RTC to encourage and elect or appoint volunteers. We should be guided by basic and necessary civility in process and procedures lest we compromise volunteerism as an essential feature of our town.”

The letter from the Darien RTC was voted on and approved by the town committee.

Marks, asked if she had a response to the letter, said, “I’m going to choose this time not to respond.” Marks said she read the letter Friday morning.

Koons said he hadn’t yet seen the letter when Darienite.com contacted him, so we sent him a copy. He said he may respond after reading it, and if so, Darienite.com will include his response here.

Update 12:44 p.m.: Koons said that now that he’s read the letter, he wanted to discuss it with RTC members before deciding whether to respond.

Here’s the full text of the letter:

As you know, one of the primary purposes of the Republican Town Committee (the “RTC”) is to “recruit and recommend Republicans for appointive offices on local boards and commissions,” which numbers over 130 at last count. This Town Committee, and indeed local government itself, depend heavily on encouragement and support of our fellow Republicans’ spirit of volunteerism, commitment, and ethics to achieve this goal.

You are recent beneficiaries of volunteerism by the RTC, whose leaders and members planned and carried out last summer’s Republican Municipal Caucus, which endorsed you both. You both were elected as Selectmen with organizational, financial, PR, Election Day, and other politically significant RTC support.

Immediately prior to last month’s Republican Town Committee Caucus you both, as sitting selectmen, participated in circulating a sample ballot with the names of all twenty-six of the candidates for election to the RTC. This sample ballot specifically delineated five sitting members of the current RTC who should not be re-elected to the Committee of twenty-one. The names of these three Officers and two Committee Chairs were marked through with red lines on your sample ballot.

Despite collective decades of political volunteerism by RTC members, we remain unable to recall a single prior occurrence of such behavior by sitting Selectmen. The circulation of material specifically and negatively targeting individuals by name is inappropriate for our town. Its precedent contradicts the chief purpose of the RTC to encourage and elect or appoint volunteers. We should be guided by basic and necessary civility in process and procedures lest we compromise volunteerism as an essential feature of our Town. 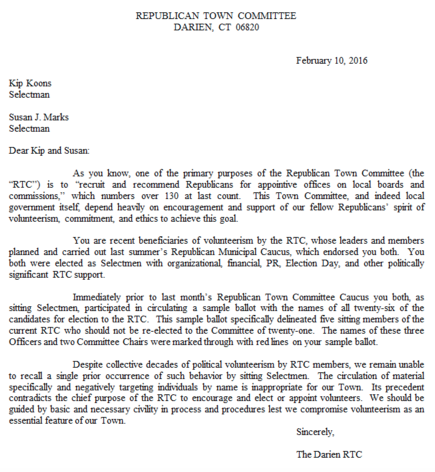 Here’s a screenshot of what the email version of the letter, dated Feb. 10, looks like.