Darien Public Works Director Ed Gentile gave out more details Monday night on what parts of the Noroton Heights Railroad Station platform-replacement project will be done at what times and how various elements of the plan would affect parking.

Gentile added to information already released on the project by the Connecticut Department of Transportation (ConnDOT), which is financing the project and which owns the station. Darien town government maintains the station and regulates the parking with the state’s permission.

These were the points Gentile made:

ConnDOT had originally planned to replace the current platforms with concrete platforms created off-site and trucked to the station. Instead, the department will now have the contractor pour the concrete in place. That will actually take up fewer parking spaces than was originally thought necessary.

Gentile worked out places for equipment and a project office that are either not on the parking lot or that will take up minimal space in the lot. Nevertheless, 30 parking spaces now can’t be used while this Phase 1 part of the project is underway.

“That is the worst impact in terms of this project,” he said. 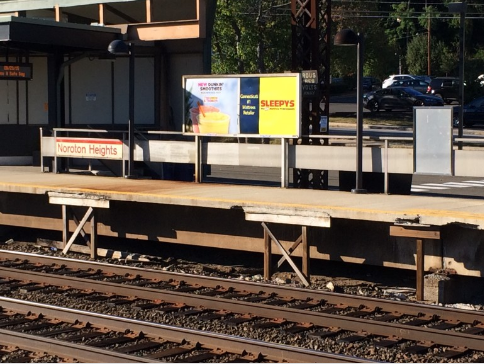 These crumbling concrete platforms (and every platform at the station) will be demolished and replaced with new ones over the course of this year and next.

Along the sides of Hollow Tree Ridge Road on the bridge that brings it over Interstate 95, Gentile said, there are a total of 18 spaces (nine on each side of the roadway) for parking. They’re currently labeled 2-hour parking for the public, but the signs will be replaced to show the parking will be only for construction vehicles or the personal cars of construction workers.

Workers will be given bright orange stickers to put on the backs of their vehicles’ rearview mirrors, and any vehicles without them will be ticketed, Gentile said.

In 2018, when the platforms will be replaced on the north side of the tracks, no parking spaces at all will be taken up by the project when it begins on the western side, nearest Hollow Tree Ridge Road. (There’s a lawn that equipment and vehicles can use.) 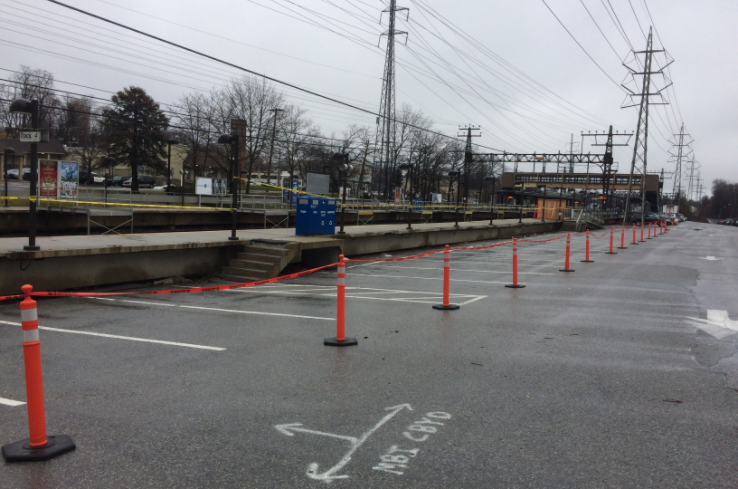 Parking spaces near the south platform’s western side are already out of commission as the platform replacement project gets started.

When the project moves to the east half of those north-side platforms, the two handicapped parking spots near the station building will remain available to the public, but eight spaces for 15-minute parking will be used for the construction project.

Town Administrator Kathleen Buch also gave out more information about the project. A total of 42 commuters with parking permits did not renew them late last year, and the town has offered only 20 of the permits to commuters who were on the waiting list, Buch said. The town is holding back on offering more while the project is underway.

Gentile said that after this year or perhaps as soon as Christmas 2017, the town could offer back the rest of those permit spaces to commuters on the waiting list.

The state may or may not enforce a winter shutdown for the project, Gentile said. During the shutdown there are certain things the contractor might not be allowed to do, he said. During that season, for instance, “pouring concrete is generally not a great idea.”

If the state doesn’t enforce the winter shutdown, the project might get done sooner in 2018, Gentile indicated. Otherwise, the project would be dormant from late November until early April of the next year.

Gentile said that town Department of Public Works officials meet regularly with officials running the project for the contractor, Manafort Brothers Inc. of Plainville, and if any problems come up or changes need to be made, town officials can start working with the contractor immediately.

“We’re in I’d say daily contact with them, as of now, just to iron out the details,” Gentile said of the DPW and Manafort. Meetings once a week are expected in the future. If the contractor finds that more parking is needed, Gentile said, the town will try to accommodate it, but it may be up to the contractor to find those spots elsewhere.

Selectman Rob Richards pointed out that the project was originally estimated to cost $10 million, but the announced amount of the contract was only $6.2 million. Gentile responded that Manafort was the low bidder and got the contract, but other costs — including the state hiring a consultant to provide oversight of the project, some administrative work and some safety measures bring the total cost up to about $8.5 million for the state.

Richards also said a commuter who regularly uses the parking lot has told him that there were often spaces available for commuters even after nearly all commuters had parked at the station in the morning.

Gentile said that the amount of available parking at the station changes in a regular pattern by the day of the work week. On Fridays, he said, spots for commuters who use pay stations rather than permits tend to use the station less, and on a Friday afternoon, those spaces can be half empty.

“The worst day is Wednesday,” he continued. “Try to find a spot on Wednesday.” Commuters have a very good sense of when parking will be tight or more spaces will be available on a particular weekday, he said.

On Monday, Gentile said he visited the station twice — at about 9 a.m. and about 4 or 4:30 a.m. There were about 20 spaces not being used in the permit-parking area and another six at the pay station parking area, he said.

At this point, Gentile said, he doesn’t think the town needs to make arrangements with Palmer’s Market, which also owns the Noroton Heights Shopping Center, to try to rent parking space.