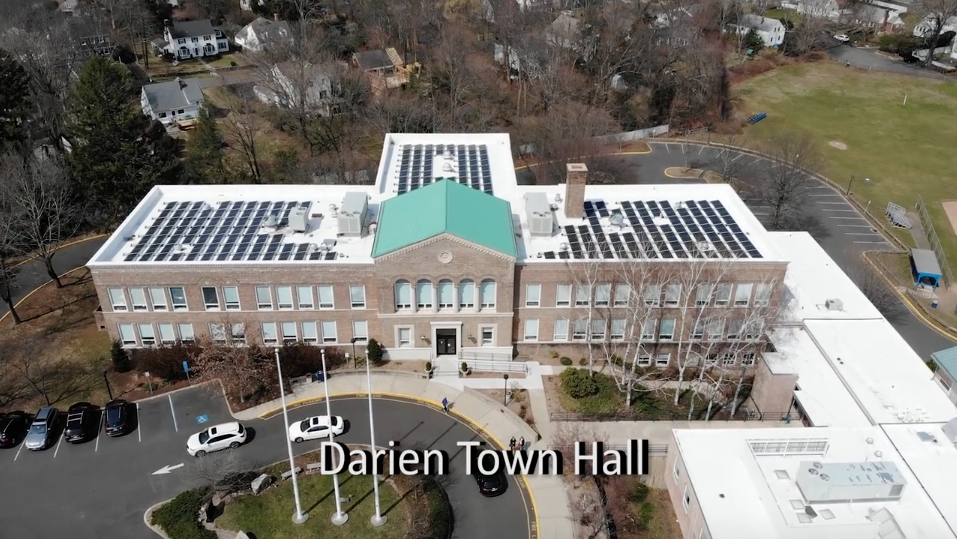 From video by Jordan Lewis and Cecil Wade for Darien TV79

Solar panels now on the roofs of three town buildings are expected to save Darien taxpayers roughly $40,000 in reduced electricity bills in the first year and generate as much power as 120 tons of coal.

Those were some of the statistics officials gave out at the ribbon-cutting ceremony conducted Monday afternoon — on Earth Day — at Darien Town Hall, and in statements made in connection to the event.

Darien is “a leader, in terms of environmental sustainability,” First Selectman Jayme Stevenson said at the event. “I think we’re a role model for small and large towns alike.”

Craig Flaherty, chairman of the town’s Advisory Committee on Sustainability, said that it’s taken about two years “from idea to implementation” to get the panels installed and ready to generate electricity — something that hasn’t happened just yet.

“It’s just a matter of the final bits of paperwork,” he said. 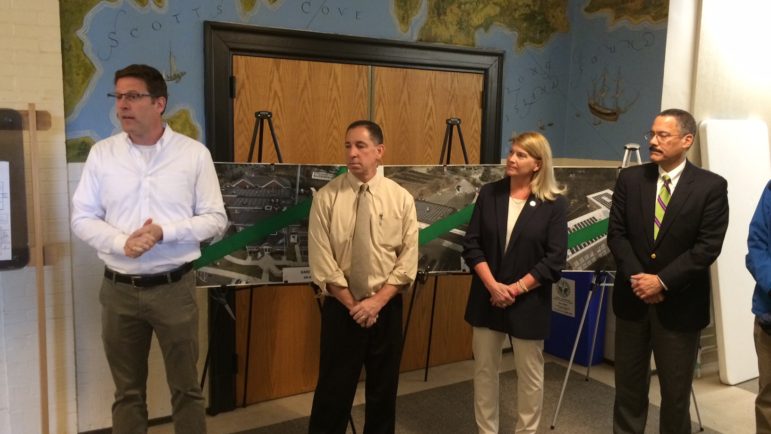 The panels are installed on the roofs of Town Hall, Police Headquarters and the Public Works Garage on Ledge Road. The town already has panels installed about a decade ago on the roofs of the Darien High School gym and Ox Ridge School. 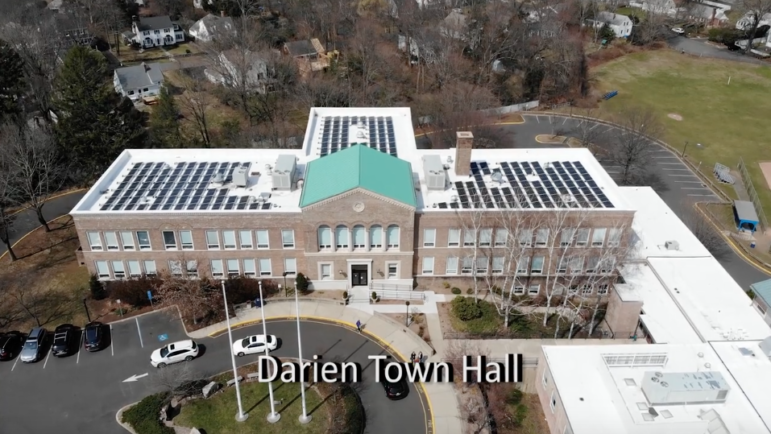 From video by Jordan Lewis and Cecil Wade for Darien TV79

Work is starting on the installation of solar panels on three more school buildings — at Tokeneke School, Holmes School, and Darien Public Schools headquarters on Leroy Avenue. That brings the total number of town government buildings with panels to eight.

(The town has three other school buildings without solar panels: Hindley and Royle elementary schools and Middlesex Middle School.) 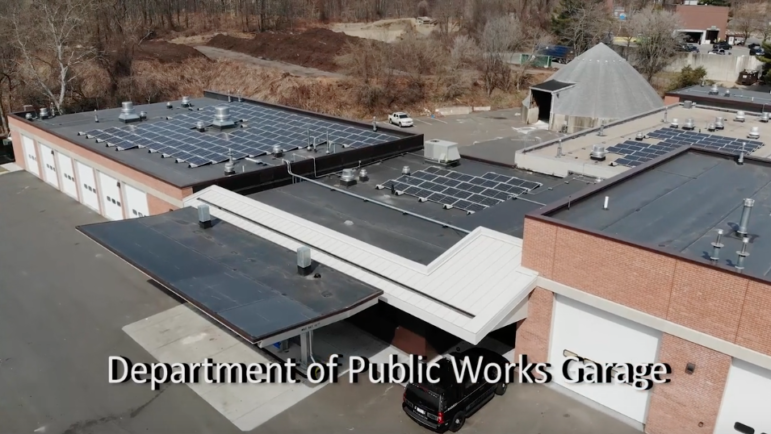 The town agreed to buy the electricity generated by the panels from the Connecticut Green Bank at a fixed and flat rate of $0.062 per kilowatt-hour over the next 20 years.

This is less than the rate that the town currently pays for its power, which varies and increases over time. If electricity rates go down over the next two decades, the town would lose money, but town officials and many others don’t expect that to happen. 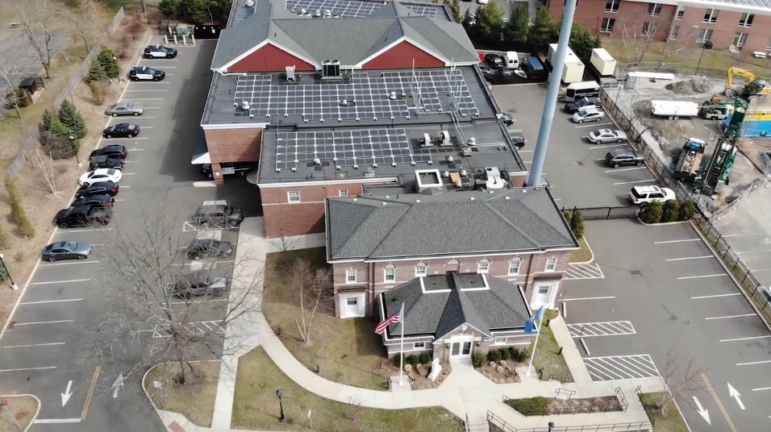 Solar panels on Darien Police Headquarters (notice the the ones at the top of the picture, separate from the rest)

Stevenson praised the hard work of Darien Public Schools staff, the town Department of Public Works “and the fabuloous people who volunteer their time on the Austainability Committee, so we’re very proud of the advancements we made.”

Although the Sustainability Committee said the first year of savings is expected to be $40,000, Stevenson said the town could expect to save roughly $25,000 a year over the life of the 20-year contract with Connecticut Green Bank.

Bert Hunter, executive vice president of Connecticut Green Bank, was one of the three people cutting ceremonial ribbons at the ceremony. He said the three new sets of solar panels will save town taxpayers “practically half a million dollars over the next 20 years” and “they will avoid burning a lot of fossil fuels.”

Connecticut has one remaining coal power plant in the state, he pointed out. Coal is considered one of the most polluting fuels. The plant in Bridgeport is expected to close in 2021. It would take about 120 tons of coal a year to generate the same electricity that the three new sets of solar panels will create, he said.

According to a statement released by the Sustainability Committee before the event:

“We are committed to limiting environmental impacts from town-owned facilities, to saving taxpayers money and to serving as a role model organization for others in our region and across the state,” Stevenson said in a statement released before the event.

“It is critical that we take action to reduce the release of greenhouse gases into the atmosphere if we are to avoid the worst of the predicted impacts of climate change and projects like these are a piece of the puzzle,” Flaherty said in the same statement.