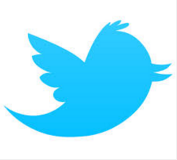 Darienite.com is offering three new features on the Home page for Darienites interested in keeping up with the latest developments in sports, the presidential election and highway traffic.

You’ll see the new features if you scroll down the Home page until you see three new Twitter feeds in the right-hand column:

We think these will be a quick, convenient way for our readers to up with the latest developments. 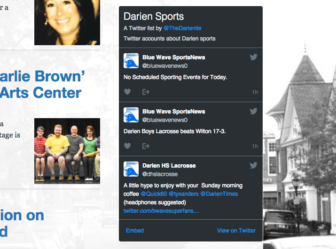 Here’s one of the new Twitter Feeds on the Home page.

If you think we could improve these Twitter feeds, or if there are others that we might ad, just post a comment on this page and tell us. (We’re listing the sports-related Twitter accounts going into that feed — please tell us if we’re missing any that should be in it.)

We still have the @TheDarienite tweets featured higher up on the right-hand column of the Home page, showing what we’ve tweeted and retweeted ourselves. That Twitter account is meant to give links to information that’s important or just interesting for people in Darien. We’ll be retweeting a bit less on the topics covered in the new Twitter feeds.

These Twitter accounts are in the Darien Sports on Twitter feature (again, tell us if there are any that should be added; we’ve tried to include accounts focusing on Darien, with one or two exceptions):