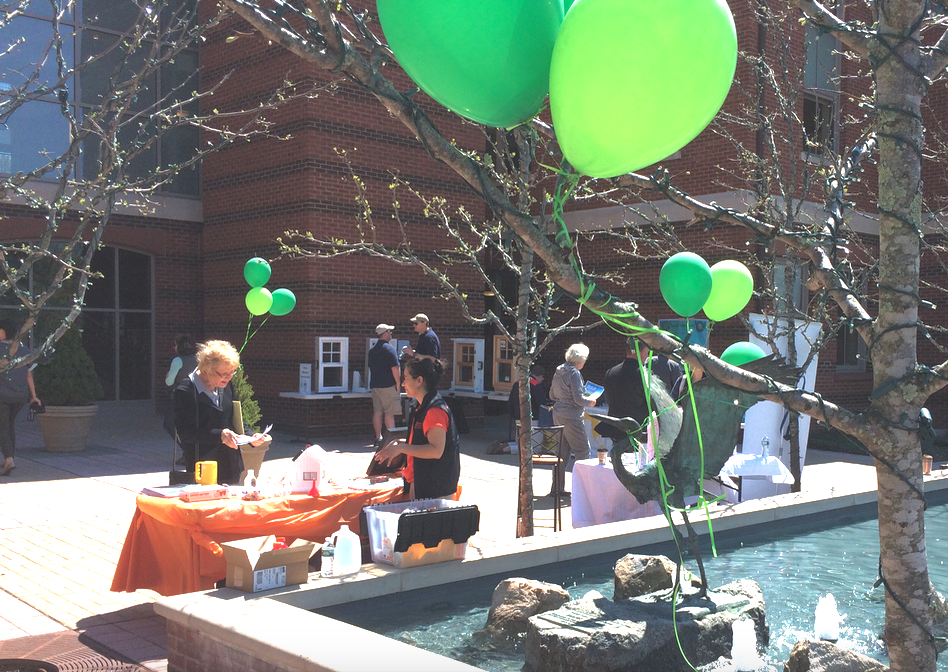 Taking advantage of the warmer weather outside Darien Library for the All Things Green Festival on Sunday.

Darien Library’s “All Things Green Festival” held Sunday during the weekend of Earth Day, put a stress on practical things you can do to save energy and interesting things your kids can learn about how some new technologies work. 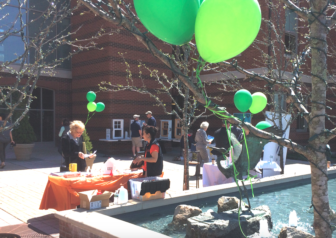 Taking advantage of the warmer weather outside Darien Library for the All Things Green Festival on Sunday.

Kids (and adults) were invited to plant a sunflower, either for the library or for themselves, or learn about how solar panels create electricity, or about Darien High School’s fuel cell car (which just competed this weekend in Shell Oil’s Eco-Marathon, held in Detroit).

Adults could exchange up to five regular light bulbs for LED light bulbs — a type that uses one of the most energy-efficient kinds of lighting on the market — or learn how they could get a state-sponsored energy audit of their home that could save them money by using less electricity, gas, heating oil or even water. 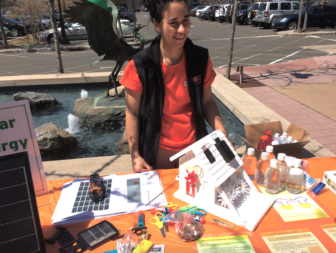 Nicole Sanchez of Direct Energy Solar. That model house in front of her is running a small fan from a solar cell.

Nicole Sanchez of Direct Energy Solar was there to demonstrate how a simple battery made with materials including pennies and clothespins could conduct electricity. Solar cells can work a lot like batteries, she said. She had a “Solar Lab Notebook” that kids could take that had workbook-like exercises kids could do at home.

Darien High School students were there to talk about their work on a fuel-cell car that a school “Principles of Engineering” class now creates each year.

The fuel-cell vehicle they build is entered into a a national competition (where the other competitors are all from colleges), said Forrest Lazzara, 16, a DHS sophomore. 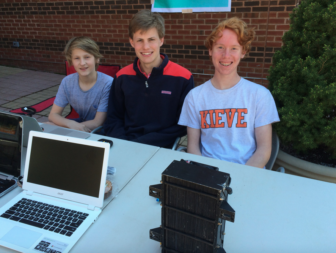 “The goal is to build the most efficient car,” he said. In part, that means one that’s as light as possible.

The fuel cell used by the vehicle runs on hydrogen and gives off water as an emission. The cell

“We learn the fundamentals of engineering,” said David Kristof, 16, a junior. “Every single year we bite off more than we can chew, and we learn how to chew it.”

“— And a lot of late nights,” added Maguire Sheay, 16, another member of the class, and a sophomore.

Librarian Sally Ijams had all the material (soil, seeds, cardboard pots) you need to plant your own sunflower. She had seeds for large and medium plants. The medium plants grow as high as a person. You could take a plant home with you (and she had advice about watering and how much sun to give it).

You could also plant a sunflower in a pot for eventual transfer to the grassy border on the far side of the library parking lot.

“So every time you see a sunflower there, they’ll be from today,” she said. 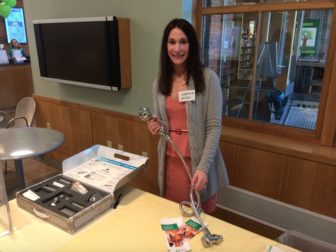 Stephanie Weiner of New England Smart Energy Group. Low-flow shower heads, including the one she’s holding, are offered to homeowners who take the company’s energy audits.

Stephanie Weiner of New England Smart Energy Group was at the event to show homeowners what they could get from a home energy “audit.” The subsidized audits, which still cost $99 per customer, test how well-insulated a home is and whether it needs window caulking or other ways to seal in air.

“So it’s like a checkup for your home,” she said. It takes anywhere from three to five hours to complete, and if they recommend a new furnace or other device, you can often get a rebate for it. If they recommend insulation, you can get a no-interest loan for up to three years to help pay for it, Weiner said.

You also get up to 25 compact fluorescent light bulbs, six free LED bulbs and a discounted rate for more LED bulbs if you do the audit.

Employees from Eversource were in the Community Room ready to exchange regular light bulbs from Darien residents in return for as many as five LED lightbulbs.

The employees, who were there in part to talk to people throughout the event, said they weren’t authorized to talk to a reporter because only authorized company spokesmen could do that. One offered to speak without giving out her name.

As part of the program, the town promotes awareness of energy conservation and the town government participates in energy conservation efforts with the help of the state and Eversource. For instance, energy usage is monitored in all town buildings, and town residents can get subsidized energy assessments.

The town is also looking into buying electricity from renewable sources that may include wind and solar operations. The Recycling Center committee has been tasked by the Board of Selectmen with helping to co-ordinate the town’s participation in the program, Flaherty said. For the light bulb exchange, he said, the town has bought 2,000 energy-efficient light bulbs.

The event runs until 5 p.m. Sunday.

Correction: Darien High School’s entry in the Shell Eco-Marathon was third place in its division, not second place.

One thought on “Fun Learning for Kids, Practical Advice for Adults at Library’s Green Festival”