Heights for the tallest building in the Corbin/Post Road redevelopment proposal is now lower (at 71 feet), as are the four buildings along the Post Road, but to make up for the lost space, some buildings farther from the Post Road would get extra stories.

Those were some of the changes detailed at a Planning & Zoning Commission public hearing Tuesday night by Baywater Corbin LLC, the partnership led by David Genovese that wants to redevelop the large downtown site on the triangular block formed by the Post Road, Corbin Drive and Interstate 95.

THIS ARTICLE describes the many new elements of the proposal and focuses on building height, the most controversial element. AN ADDITIONAL ARTICLE will describe what was said at the public hearing.

Other changes in the proposal, as detailed Tuesday night:

The tallest point: a copula/clock tower at the top of the “Meeting House” building facing Market Square: 74 feet high (just a bit higher than the 71-foot Market Street apartment building).

Proposed parking: 749 spaces, assuming 25 percent of the parking would be shared between users of the office space (who would have it on weekday work days) and restaurants and shops (who would have it during peak shopping times and restaurant hours in the evenings and weekends). Existing town regulations would call for 1,328 spaces. A parking study by a town-hired consultant assumes 40 percent of parking would be shared, resulting in only 609 spaces (cheaper to build than the developer’s proposed 749). Almost all of the new parking would be underground, beneath the development.

Sidewalk widths are proposed to be 12 feet throughout the development. Downtown sidewalk widths are as short as 10 feet in front of the building where Panera restaurant was located and as wide as 23 feet, 2 inches at the next-door Darien Playhouse building. A consultant from Gibbs Planning had recommended 10 to 12 feet.

Retail space ceiling heights on the first floors would be 12 feet for buildings along the Post Road and 11 feet for buildings on Market Lane. Originally, Genovese said those heights needed to be higher in order to attract tenants, who want them higher. The reduction in the newly revised proposal helped lower the heights of various buildings.

The hearing was for a zoning change which would allow the large development under somewhat different rules than the town already has for downtown zoning — higher building heights and reduced parking requirements in a development where parking for office buildings tends not to be needed at times when restaurants and shops want it most.

The initial zoning proposal was withdrawn late last year when P&Z Commission members voiced concerns about the height of the tallest buildings (particularly an apartment building over 95 feet high). Genovese later said the heights would be lowered.

At Tuesday night’s meeting, Genovese, the project architect and a traffic consultant presented details about the proposed development to show how the zoning change would work. An official (and even more specific) site plan would be submitted to the commission for approval if a zoning change is granted.

A Selection of Slides from the Presentation

Later, you should be able to see the full slide presentation (now available here) given at Tuesday night’s public hearing at YourDowntownDarien.com, the developer’s website, and possibly on the town government website: 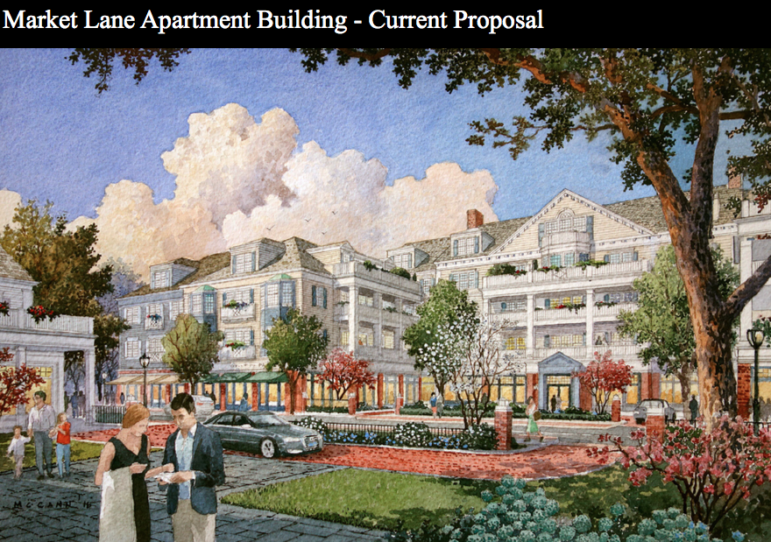 The new, shorter version of the Market Lane Apartment Building. 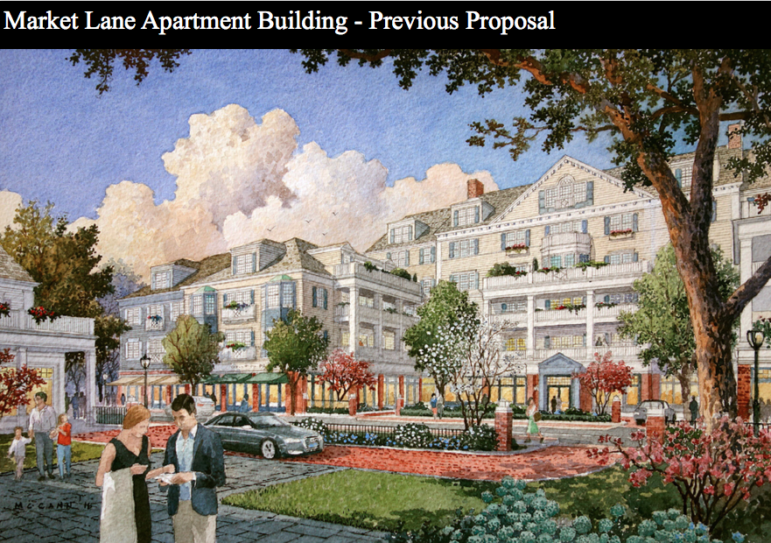 Part 1 of the "Zoning Envelope," showing what would be allowed on the site.

The "Anchor Tenant" (expected to be L.L. Bean) would be in a building where the Bank of America now stands (next to the I-95 South Exit 11 ramp)

Sister buildings at either side of Market Square

Comparison of the proposal as of last summer and now for square footage of various buildings and the mix of residential, office and retail uses.

Sidewalk widths at various spots around Darien, along with the developer's proposal.

Meeting House building and annexes in the old version, which was shorter (the dotted lines show the new roof lines). This building faces Market Green. Behind it is the service road and the highway.

The newer, higher proposal for the Meeting House and its annexes.

What Market Square looked like in the previous proposal (as of last summer), with a shorter version of the Meeting House building and annexes. (The "sister" buildings on either side of the square appear unchanged in the newly revised proposal.) See next slide for the revised rendering.

Market Square, seen with the higher Meeting House in the latest proposal.

A reminder, for comparison: The view now from about the same perspective of the site of the proposed Market Square.

The Meeting House building (called "Market Hall" in this slide, but not in the rest of the report) in the previous proposal, looking north or east on Market Lane. The building looks across Market Lane to the Market Square "town green." The next slide shows the revised proposal for the way it would look. 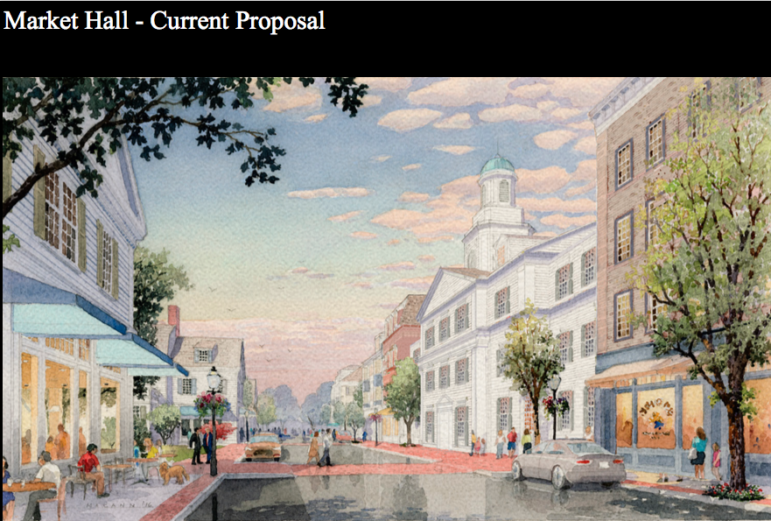 In the current proposal, the Meeting House building is a story higher, and it doesn't have pillars in front.

How the Building Heights Change

Here are the height changes for various buildings, starting with the one proposed for the Post Road, next to the I-95 South Exit 11 ramp (all heights are from the midpoint of the roof line if the building doesn’t have a flat roof, which is how Darien zoning regulations measure height, the tallest roof point for non-flat roofs is often several feet higher): 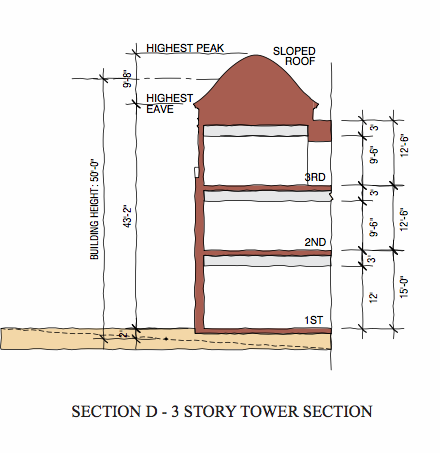 A side view showing the heights of various features at the tower proposed for the apartment building at the corner of the Post Road and Corbin Drive. The actual height of the very top of the tower roof is not shown.

Apartment building on the corner of Post Road and Corbin Drive — originally 55 feet — NOW 43 feet (reduced 12 feet); EXCEPTION: A tower at the corner would be 50 feet high (and several feet higher from the peak of the roof) 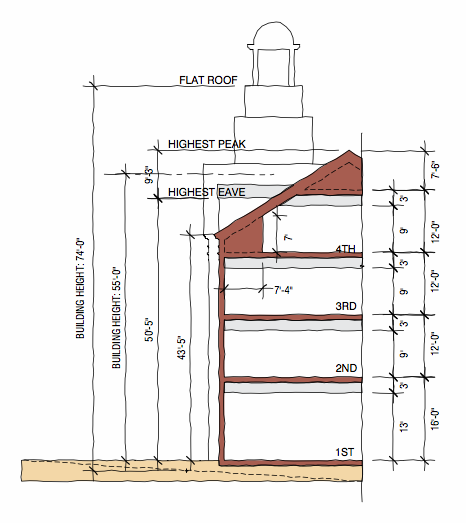 Along “Market Lane” (a new, private street parallel to the Post Road) moving toward Corbin Drive:

Annex building (to the right as you’re looking at the Meeting House, see map for location) — originally 70 feet high, then 42 feet high — NOW 54 feet high (lowered by 16 feet from the original proposal, raised 9 feet from the last proposal to add another story)

Meeting House (facing Market Green, between the two “sister” buildings; also referred to as “Market Hall” in the slide presentation) — originally 70 feet high (five stories), then 41 feet high (three stories), now 55 feet high (four stories). The bottom of the copula on the top of the building would be at 74 feet (see the side-view showing heights of that building, above). 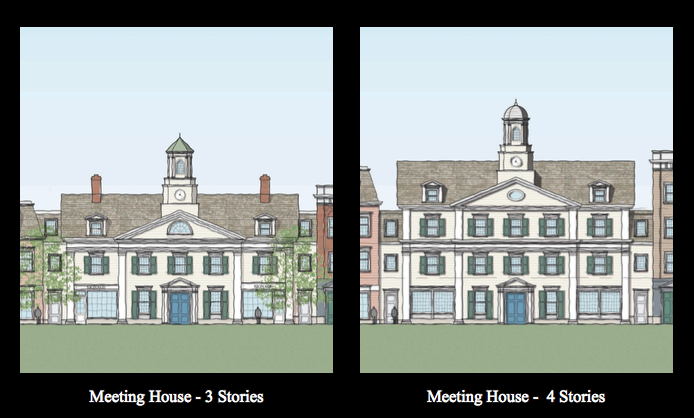 HIGHER: At LEFT, the Meeting House as proposed last summer. At RIGHT, the latest proposal, with an added story. The two “annex” buildings on either side are also each a story higher.

LOWER: AT LEFT, the original proposal for the Market Lane apartment building, at six stories. It’s the highest building in the proposed complex. AT RIGHT, the latest revision at five stories and a height of 53 feet, six inches. The back of the building faces Interstate 95, across a service road parallel to the highway.

At the corner of Corbin Drive and Old Kings Highway South: 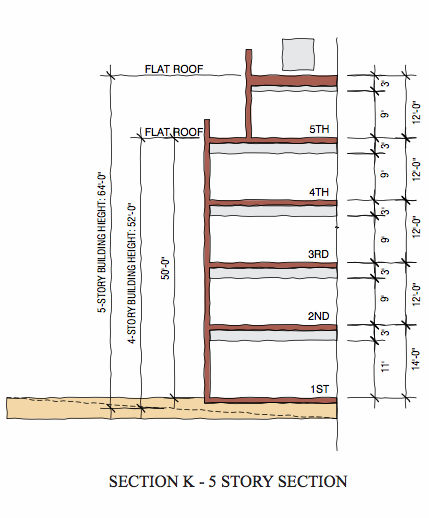 The office building, a side view showing various heights. The top story is set back from the street (Corbin Drive). The building would stand where the Post Office is now located.

Not included in the list above are all the heights in a 2016 revision of the redevelopment proposal, where building heights were, for the most part, between the original proposal and this one. You can see those heights in the slides from the full presentation.

Genovese said on Tuesday that the ground height of the development, or at least the interior of it, is expected to be two feet below the present ground height, meaning all heights mentioned above are lower by that amount (they’re a bit higher, however, if the actual peaks of sloped roofs are included, rather than average roof heights).