He said the idea is not something he’s recommending because it needs to be looked into further by the administration and the Board of Education.

— an article from NewCanaanite.com republished here (with slight changes) because later start times are under consideration by some school districts in this area and elsewhere. This article shows some of the complications that go into changing school schedules.

“I’m not going to say this is the scenario I am recommending yet, because there is more work to be done,” Luizzi told members of the Board of Education at their regular meeting.

“But I want to share it with you because work is being done and continues to be done. The magnitude of the change—it moves everybody. There is nobody who is in the same place in terms of the schools, the kids, the families. So it is about as significant a change in terms of the start as you can get.”

Under the current system, high school students and those in the seventh and eighth grade at Saxe start school at 7:30 a.m., while South School students and fifth- and sixth-graders at Saxe all start at around 8:15 to 8:20 a.m., and East and West Schools students start at 9:05 a.m.

Under the new system that Luizzi cautioned is being considered on a preliminary basis now, the elementary school students could start earliest—perhaps 7:30, 7:35 or 7:40 a.m., he said—with high school students starting through a second tier of busing, and Saxe Middle School last.

The major challenge at Saxe, he said, is the “facility and the parking and the dismissal,” he said. 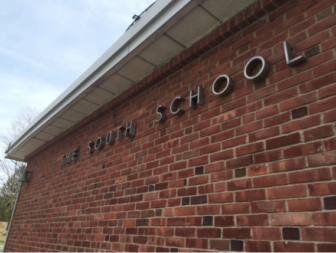 “Those buses would go over to Saxe and ‘stage,’ essentially. Then the first buses that complete the runs from the high school would then go over to Saxe, and you would have a first wave of bus dismissal. Then those students would be dismissed and their buses would leave, then the other buses move in as a second wave of dismissal.

“Because you don’t have another school or another tier waiting for those Saxe buses to come back around, it is possible to do this in two waves.”

The proposal marks the first time that the district has outlined a possible new plan to parents who, citing established health data, have been eager to see the Board of Ed make headway toward a new system under which adolescents are not forced to wake up so early to attend school.

Some of those parents addressed the Board on later school start times during a public comment period at the meeting. They urged the Board to work more quickly toward a solution, requested that the Board move up a target June date to make its decision, estimate the costs associated with a recommended change and form a working committee that includes parents—a group originally slated to form last fall.

Melanie Keene, a parent of a South School student with younger children to come up through the system, said she appreciated the Board’s work and urged it to “look at the impact to all students” on starting school earlier, including those as young as four years old, and to “make sure that where there is not a lot of data, that we are not jumping to conclusions about how elementary school students … may be impacted by an earlier start time.”

Luizzi acknowledged that the formal research administrators have seen regarding the effects of early start times have to do with adolescent students starting around eighth grade.

“We are very aware of not doing anything that would disadvantage any of our students,” he said.

The district has asked a consulting firm to do some “meta analysis for us about the impact of start times on elementary-age students.”

“Preliminarily they echoed what our findings have been, which is that it’s very sparse, there is not much out there,” Luizzi said. “But we also agree that the lack of research also does not mean carte blanche, so we are really looking to see what else we can find and try if we cannot get some hard data, at least have some anecdotal conversations with some districts that have made changes.”

The proposed change presents some difficult questions for the district, he said, including a decision on just how early the first pickup for elementary schools should be. It also would come with some expense, as additional buses would be needed to transport South School students who currently are walking to school so that they’re not doing that in the dark.

“There is also quite a bit of coordination that would have to occur,” Luizzi said. “Right now we have a sizable group of students who go after school from the elementary and middle schools over to the Y. We would have to work with them and coordinate with them and really all service providers who work with our students after school. We are really talking about for East and West [elementary schools], instead of dismissing at 3:35, they are looking at an hour-and-a-half earlier, that is really a significant jump in time. So the community and service providers and others would need to know and work need to work and talk with them.”

Luizzi called Walder’s proposal a “fifth option,” in addition to the four that a consultant presented in November in order to sketch out baseline costs and challenges for the district.

One advantage of the proposal is that it would mean students do not have to be dismissed early in order to participate in athletics.

“It would be difficult to recommend a schedule where it means students would automatically be missing classes, because that is our core mission, that is what we got into education to do, first and foremost,” Luizzi said.

Another advantage is that it addresses concerns around middle school-age kids by putting them in the third tier, shifting clubs and activities to a before-school activity instead of after school, he said.

Mulling Over the Idea

Luizzi said the proposal shows “some promise” but that the Board’s job now is to “punch holes in it,” figure out what difficulties could arise from the new system and address them.

Board of Ed Chair Brendan Hayes said, “I think it’s great to have this as a  potential scenario that we could evaluate in the coming months and make sure we take down all potential issues from various constituencies and make sure that if we make a change that impacts every single one of the students in the district, that it’s the right one.”

Board of Ed Secretary Jennifer Richardson asked Luizzi when the new proposal could be implemented if it’s found to be sound. He said though something may be done in the middle of the next academic year “if we wanted to be aggressive,” that “reasonably I think you could say the 2020 school year.”

Noting that June has been pencilled in as a “distant date” for the Board to make a decision, Richardson called for a “punch list of what we need to cover in our meetings that will be able to make us feel as though a good decision.”

Luizzi responded that June was selected “so that board at that point has enough info accumulated to make an informed decision about this or that way or neither at this time.”

“Certainly not going to hold anything back and wait to June if we have it,” he said.

Board of Ed member Sheri West said, “I think in order for us as a Board to demonstrate our urgency, I do think we need a timeline. There are six months between now and June, so we should be able to communicate to the public exactly what is going to happen between now and June to get us to the point where we can make this informed decision.”