Saying the Talmadge Hill parking lot can be more effectively used to serve local commuters, the Board of Selectmen on Tuesday voted unanimously to convert 36 daily metered spaces there to permit spaces for New Canaan residents.

The change is designed to cut into the waitlist at the commuter lot, recently pegged at 115 people, without requiring feasibility studies and construction work, such as expanding the parking levels there north toward the Merritt Parkway.

That type of project, if allowed, remains a possibility—likely for some time next year, First Selectman Kevin Moynihan said—but “the cheapest way to increase permit spaces is to take daily fee spots.”

“There is demand for New Canaanites for those Talmadge Hill spots,” Moynihan said at the meeting, held at Town Hall. “When we do have permit spots we oversell by 50 percent, so we have daily fee spots that are sitting empty that we get no revenues from.” 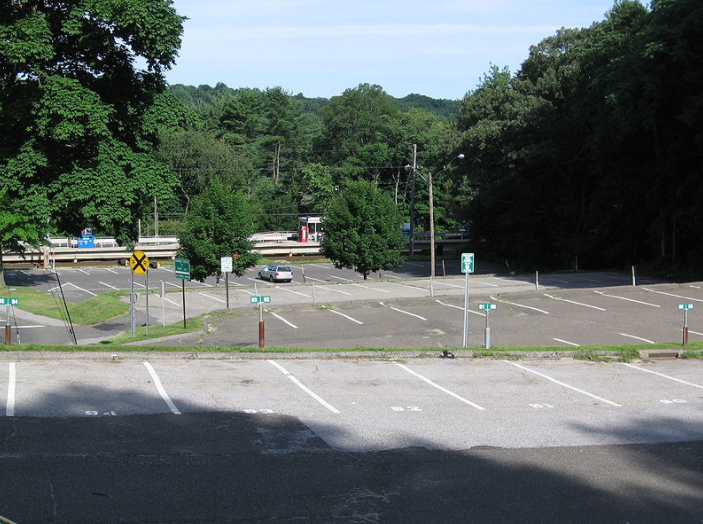 The easternmost/uppermost tier at Talmadge Hill has 36 metered spots and the next level down has 60.

Moynihan and Selectmen Kit Devereaux and Nick Williams voted 3-0 to convert the 36 spots at the top into permitted spaces for New Canaan residents. The change will take effect June 1, and officials will notify motorists who park at Talmadge Hill through signage, such as public works’ changeable electric sign, as well as bulletins in the news.

Parking Manager Stacy Miltenberg, a guest at the meeting, said her department conducted a study over eight days where officials tracked how many motorists used the lot.

Of the 216 vehicles they counted, 181 were Connecticut plates and 35 out-of-state (33 New York and then one each Massachusetts and California). Of the 181 Connecticut cars, 61 parked there four to eight times in the study period, Miltenberg said — 23 New Canaan and 34 nonresidents (four weren’t in any system). Of those 34 nonresidents, most were front Darien, Wilton, Stamford and Ridgefield, she said.

Keith Richey, chairman of the Parking Commission and a guest at the meeting, said the volunteer group that advises on off-street parking matters wanted to explore the feasibility of physically expanding the lots at Talmadge Hill prior to converting metered spots to permit spaces.

The commission’s sense was that there are “other things we should do first before going to that,” meaning converting the spaces.

“If you could break out into the town-owned land toward the Merritt Parkway and add, say another 50 spots, and some of those on the top tier would be metered and then you could convert one of other two tiers into being permit, then that way you would still have roughly same number of meter spots you have today,” he said.

The economics of the change are not an issue, Richey said, because New Canaan gets about the same amount of revenue from such spaces whether they’re metered or permitted.

To a concern Richey relayed from the commission regarding the state’s view of demand along the New Canaan branch — the General Assembly now is working on ways to generate revenue for the Department of Transportation in order to avoid reductions in Metro-North Railroad service — Moynihan noted that New Canaan owns its rail parking lots (other towns don’t) and is therefore free to designate its own permitted versus metered spaces.

Devereaux in voting for the conversion reiterated her concern: “I want to make sure that people who are counting on those spaces get forewarning and not just on that day find out that parking spaces are scarce.”