With inconclusive survey results and established health data in hand, nearly all members of the Board of Education said Monday night that the district should pursue a new school start time schedule that allows teens to get more sleep.

Though the Board took no formal vote at its regular meeting, seven of eight members present said the district should devote further study to an option that would see New Canaan High School start at 8:20 a.m. — 50 minutes later than the current 7:30 a.m. start time.

“I think that based on the research that has been done, based on the feedback that we have, it’s worth figuring out whether there is a viable option to have our teenagers go to school later,” Board of Ed Chairman Brendan Hayes said at well-attended meeting, held in the Wagner Room at NCHS.

“And the likely [outcome] from that, although I think [it’s] also beneficial for our younger students, is for them to go to school earlier.”

The additional buses needed to realize that system would see New Canaan pay an additional $300,000 to $450,000 annually, officials have said.

In comments that garnered support from Board Secretary Jennifer Richardson, Maria Naughton, Katrina Parkhill, Penny Rashin, Julie Reeves and Sheri West, Hayes rejected some other proposed start time options that would be even more expensive—one of them would cost an estimated $1.2 million to $1.4 million more each year—or pushed school end times prohibitively late in the day. (Board member Tom Cronin, who is not seeking re-election, was absent.)

“I don’t want to suggest we go down a path that I think is just unrealistic in light of the budget pressures we are under,” Hayes said.

Noting that New Canaan Public Schools rank among the very best in Connecticut and among the best nationwide, Hayes cited the district’s broad-based prioritization of health and wellness, saying that if nothing changed, “we will not remain first in the state and among the best in the country.” 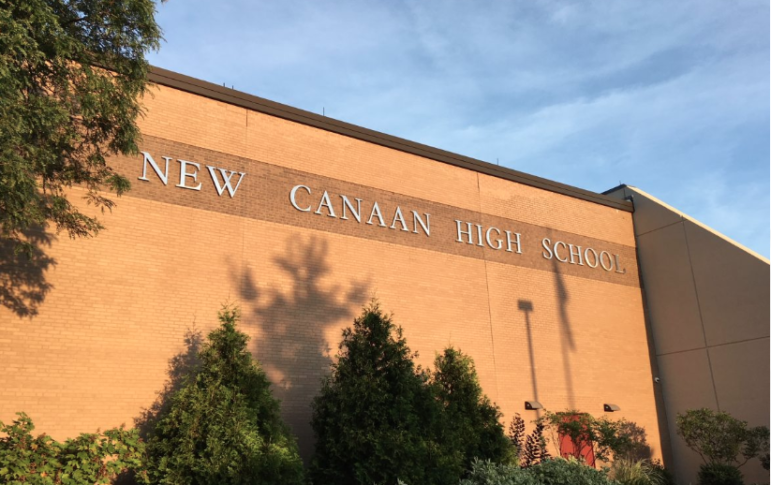 It wasn’t immediately clear what the district administration’s next steps would be, though Hayes said further study would be taken up in the fall and winter, with an eye on gaining approval for a budget for the following fiscal year and implementing the new schedule for the 2020-21 academic year.

Some Board members urged creation of a definitive timeline as well as a working committee that would include parents, while others called for more information on what the survey showed to be wide opposition to the proposed new schedule among district staff.

Board of Ed Vice Chair Dionna Carlson said she wasn’t ready yet to support a different schedule.

“The survey is about as clear as mud,” Carlson said.

School parents and staff were furthest part on both the current and newly favored three-tiered systems, according to the survey, whose findings were summarized during a presentation (which can be found here) by Superintendent of Schools Dr. Bryan Luizzi.

A total of 1,464 middle and high school students, 1,390 parents and guardians, 549 staff members and 115 community members took the survey.

Carlson noted that the survey, conducted by Arlington, Va.-based Hanover Research, showed no strong preference among stakeholder groups with respect to health and wellness for the new start time option.

For example, while getting all three elementary schools on the same schedule makes sense, Carlson said she worried about now putting younger Saxe students on the same buses as older ones.

“Having been in this community for over 20 years, the one way we sell Saxe as being the largest school, as a middle school [in Connecticut], is that we separate out the fifth and sixth [graders’] transportation and the seventh and eighth transportation so that they are never on the same bus together, and that is how a lot of parents have gotten comfortable with Saxe being the largest middle school in the state,” she said.

Carlson—who had called for the Board to exclude unrealistic school start time options from the survey—called for a re-survey that would ask for the community to rate the current schedule against the newly favored one.

She also said the “social-emotional outcomes” of students who attend schools that start later have been found to be no better than New Canaan’s, at least in some cases.

Finally, Carlson said she’s received comments from parents “who are afraid to speak at these meetings or comment because they feel a group in community is silencing them or making them feel that if they try to say something, I have heard the word ‘bullied’ used.”

“So I would like to encourage, this is a very difficult issue for all of us to tackle and not everyone believes the same thing as everyone else, but we are one community and we need to come together with whatever decision is made and be respectful of everyone’s opinions,” she said.

A handful of parents, including a prominent local pediatrician, shared their opinions during a public comments section of the meeting.

Town resident Graham Lampen said he’s seen his diligent and hard-working 14-year-old son find it increasingly hard in the past two years to stay awake in class because he must rise at 6 a.m. to get to school.

Lampen said his son “dreads going to school because so tired” and “never gets a lie-in.”

He added, “What is the point of our having a world-class school system in our town if when they get up they are so shattered that they dread going to school?”

Other parents said they’ve removed their children from New Canaan Public Schools specifically because they found private schools that started later. Some said they would have moved to Wilton, which has had its later start time in place for 10 years, if they knew then what is now data-driven knowledge about the health benefits for teens of getting more sleep.

Lifelong New Canaan resident Dr. Bill Flynn, whose own children went through the system, said he’s seen a change in the past 20-plus years where New Canaan children are shown to get less sleep than those from other towns.

“In my experience it’s a very real thing—you won’t be making a mistake,” Flynn said of changing school start times.

Luizzi and Hayes both said the district’s existent health and wellness initiative is broad-based, and several officials at the meeting noted that changing start times was one strategy but not a standalone solution to wider problems facing teens.

“While start times are an important issue, they are an issue that we have to examine in the context of everything else that is done within the school system and what is best for all students, not one particular group of kids, one particular school or one particular issue,” Hayes said. “It’s a complex system that we are managing.”

West said she wanted to “better understand the staff opposition to this and really understand is it an inconvenience that they will get over or is it actually something that they will make a job decision based upon?”

“That for me is my biggest outstanding concern and something I would want to really drill down to understand,” she said.