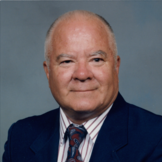 He was born in Springfield, Mass. on June 12, 1931, the son of Raymond F. and Alma (Kreiger) Donnell. He was raised in Darien, CT and graduated from Darien High School in 1949 and Suffield Academy in 1950.

Mike attended Connecticut Engineering Institute and served in the U.S. Coast Guard, being honorably discharged as a first class petty officer. On July 10, 1950, he married Kathleen Callahan at St. Mary’s Church in Norwalk. Mike and Kathleen resided in Darien for 13 years where Mike worked first for the Connecticut Power Company, and then as a partner in Henrici Associated, Land Surveyors.

In 1967, Mike and Kathleen bought a dairy farm in Franklin, N.Y. which the family operated until 1986 when they sold the farm and retired.

On October 4, 1986, Mike, having completed his diaconate studies, was ordained, along with 18 classmates, at the Cathedral of the Immaculate Conception in Albany, N.Y. by Bishop Howard Hubbard and began his ministry as a Permanent Deacon in the Roman Catholic Church.

He was assigned by Bishop Hubbard to rural ministry to serve in Franklin, N.Y. in the mission church of Sacred Heart Church of Sidney, N.Y. In the absence of a resident priest, Deacon Mike was the ministerial presence to the Catholic Community as well as other people in the town of Franklin, providing spiritual support in the context of baptisms, funerals and prayer services at nursing homes and countless individual visits to the homebound and dying of all faiths.

During his 30 years of ministry in Franklin, Mike was a moving force in the ecumenical Interchurch Council of Franklin and served as its chairman for 27 years. Through the Council, Mike helped organize and promote a variety of ecumenical services throughout each year.

In addition to his wife of 62 years, Kathleen Donnell, he is survived by his children, Michael Donnell, Jr., Gregory Donnell, Mark Donnell, Kathy (and her husband, Ted) Krisowaty and Lauren ( and her husband, David) Main; daughter-in-law, Charlene Donnell; and grandchildren Kevin, Robert, Raymond, Malcolm, Lynda, Andrea, Megan, Norman and Nicole.

Donations in Mike’s memory may be made to Catskill Area Hospice, 1 Birchwood Drive Oneonta, NY 13820. Condolences and memories may be shared with the family online at www.landersfh.com.

Arrangements are under the direction of C.H. Landers Funeral Chapel, Sidney.