Do you remember PEOPLExpress Airlines? How about NorthEast? Or Mohawk?

These airlines of the past are what we call “fallen flags,” remembered, perhaps, but no longer in business, at least not under those names. The U.S. domestic airline industry is littered with such baggage of our traveling past and each one brings back memories of a time when flying was fun.

Newark-based PEOPLExpress was a favorite of mine, flying out of the ancient North Terminal and charging super-low fares, which were collected in-flight. Like many carriers they grew too big, too fast and were snapped up by aviation pariah Frank Lorenzo.

“Newark-based PEOPLExpress was a favorite of mine, flying out of the ancient North Terminal and charging super-low fares which were collected in-flight.”

We also had Pan Am, Eastern, TWA, Northwest and Continental, each gobbled up or merged with much larger carriers leaving us with, some say, a much less competitive (and more expensive) travel industry.

Some of the lost carriers were airlines within an airline, like Song (Delta’s low cost carrier, targeted specifically at women) or Ted (a no-frills subset of United). Texas-based Braniff had the distinction of being the only U.S. airline to fly a Concorde (albeit it a lease from Air France and British Airways and flown subsonic over U.S. airspace).

A slew of regional carriers are gone forever: Mohawk (taken over by Allegheny, itself subsumed into USAir which in turn was bought by American). Piedmont was also grabbed by USAir. North Central and Southern Airlines became Republic, which bought Hughes Airwest before getting picked up by Northwest. 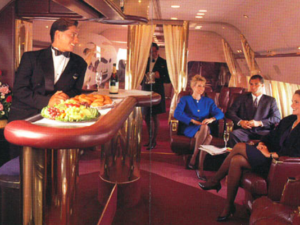 Air Florida flew for 13 years, even flying to seven European cities. As with competitor ValuJet, a tragic air crash for each led to bankruptcy. Tower Air made a name for itself (and good money) flying charters for the Pentagon while also providing cheap transcon service from JFK to the West Coast.

Carnival Airlines, owned by the cruise ship line, funneled passengers to its own ships on charters and was later acquired by a reorganized PanAm.

Midwest was a favorite for many offering 2 by 2 seating and fresh baked cookies inflight. It was started by Kimberly Clark to ferry its employees. But there were also regional carriers Vanguard, Air South, Eastwind and McCain airlines.

For crossing the “pond” there were a number of failed airlines that offered first-class comfort at bargain fares: L’Avion, Eos, MaxJet and SilverJet. Still flying is one of my favorites, French airline La Compagnie which flies just 76 passengers on an A-321neo that can carry over 200, at less than traditional business-class fares.

Domestically MGM Grand Airlines was popular with the Hollywood crowd, flying from LAX to JFK in a lavishly equipped DC-8 with couches and such.

When smoking was banned on U.S. flights, the American Tobacco Institute talked about starting a smokers-only airline, but that never happened.

One airline that did fly, for a couple of years, was Hooters Air, owned by the restaurant chain. In-flight cabin crew on the golfer-targeted flights to Myrtle Beach wore the same skimpy attire as the restaurant’s waitresses. Hardly politically correct and never profitable.

Yes, flying used to be fun. But not so much anymore.