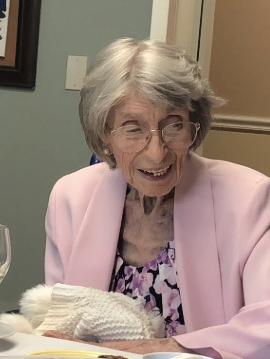 She was born Feb. 25, 1924, at her parents’ home on 8th Street in Brooklyn, New York, the daughter of Edward Joseph McGrath and Helen Johnston McGrath. She had three sisters: Helen, Ann, Edith, and a dear cousin, Peggy, who was like a younger sister to her.

Mary graduated from Bay Ridge High School and then St. Joseph’s College for Women, both in Brooklyn. During college she worked to support the war effort, winding stators, an airplane engine part, at Bush Terminal in Brooklyn.

After college, she worked for Dunn & Bradstreet and then several law firms as a legal secretary, retiring from General Signal Corp. as a patent secretary.

She met the love of her life, Frank H. Brennan Sr., and married in Brooklyn in October 1949, where they lived until moving in 1958 to Rockville Centre, New York.

Mary once recounted Frank would only marry her if she agreed to have more than one child. They had six.

Mary loved playing bridge, traveling, reading, Broadway shows, the beach, and most of all, being surrounded by her family.

In lieu of flowers, the family requests donations to the Maryknoll Fathers and Brothers in Mary Brennan’s memory.