The Maritime Aquarium at Norwalk is inviting guests to follow along as it seeks insights into horseshoe crabs, a favored marine creature whose mystique and environmental importance make up for what it rather lacks in charm.

A lab window lets Aquarium guests check out the work, especially following along as tiny young horseshoe crabs molt their exoskeletons to grow. 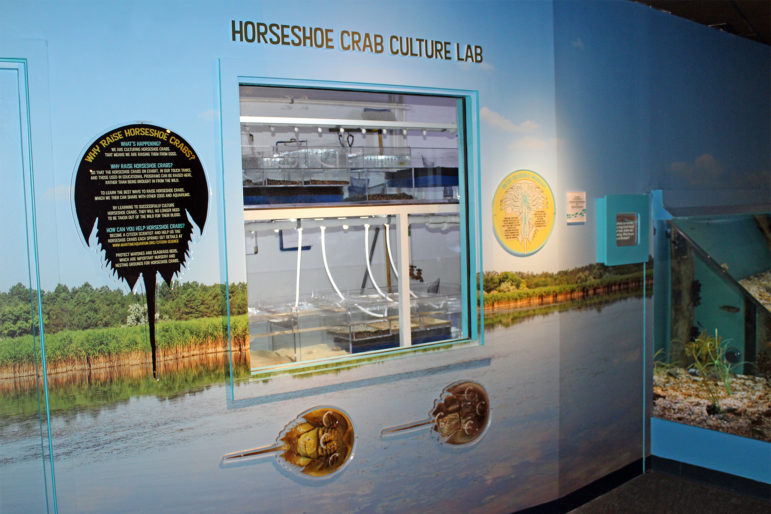 “I look at this exhibit and I see a perfect marriage of everything that the Maritime Aquarium does well: from our exhibits to our education programs to our conservation work in the field,” said Aquarium President Jason Patlis.

The lab was created thanks to a gift from Richard and Kim Alexander of Rowayton and their family’s Ballard Foundation.

More closely related to spiders than to crabs, horseshoe crabs (Limulus polyphemus) are readily recognizable for their domed brown bodies, pointed tail and “book gills” underneath. Their nine eyes and other light receptors aren’t obvious, and — as any beachcombing child on Long Island Sound knows — their pincers and tail are harmless.

Despite lacking a personality (and even a face), horseshoe crabs are among the most popular creatures on display at the Maritime Aquarium. “Citizen scientist” nights for placing census tags on horseshoe crabs at a Norwalk beach draw more participants than any other Aquarium volunteer field program. 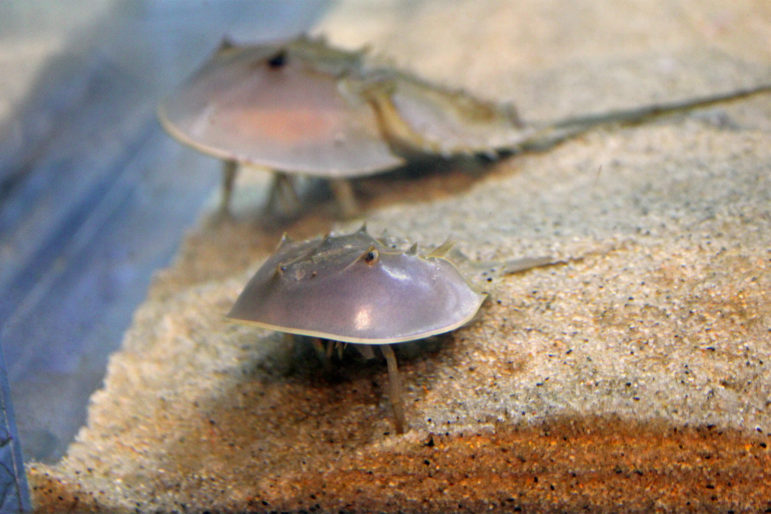 Perhaps it’s a special appreciation for an animal that has been crawling the oceans since before the dinosaurs, or for the unique properties in its blood that are critical in testing for bacterial contamination of medical devices.

Unfortunately, horseshoe crabs on the East Coast are listed as “vulnerable,” primarily because of over-harvesting for research and for use by fishermen as whelk bait. Management plans are in place to try to stabilize populations.

“This facility lets us dig down into what makes these animals tick early in life, and how we can apply that to their conservation in Long Island Sound,” said Dr. Dave Hudson, research scientist for the Aquarium.

In the new Culture Lab, tanks contain horseshoe crabs of various ages – from several 2-inch-long 2-year-old crabs to hundreds of 2019 hatchlings barely the size of peas. 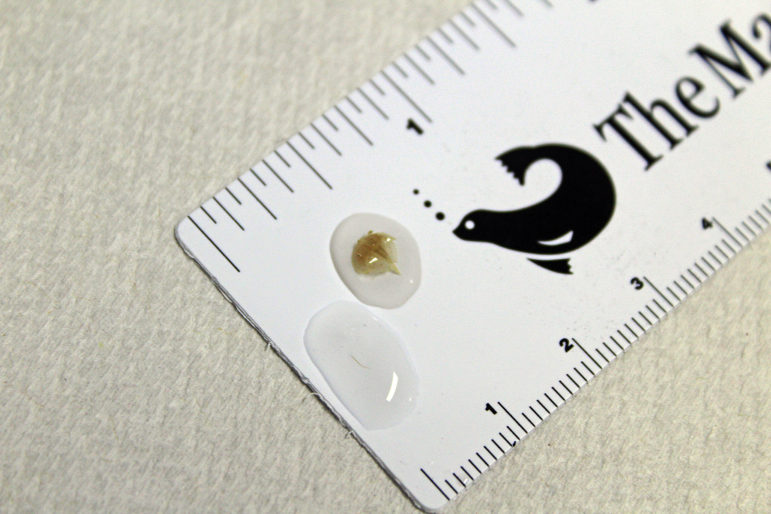 A tiny baby horseshoe crab, hatched this spring, gets measured.

Eventually, light, water temperature and other variables will be adjusted in hopes of encouraging mature crabs to breed. Learning how to grow large numbers of horseshoe crabs in labs would eliminate medical companies’ need to harvest them from the Sound and the Atlantic. While most horseshoe crabs are returned to the water, an estimated 30 percent do not survive.

Richard Alexander called the lab just a first phase of collaboration on horseshoe crabs between The Maritime Aquarium and the Ballard Foundation.

“It is the vision of this partnership to enrich our science and understanding of this amazing animal, as well as to identify sound biological and biomedical best practices, ultimately leading to the development of a sustainability medical-use model while also establishing a true horseshoe crab conservancy,” Alexander said.

The Ballard Foundation was established in 2014 by Richard Ballard Alexander in memory of his grandmother, Helen Ballard Klugesheid.

The Foundation’s mission is to support programs and institutions that ensure global environmental sustainability/stewardship, enhance education and enrich the quality of life of all peoples. It has a particular focus on initiatives in the United States but will also assist organizations globally to enable them to achieve their full potential.

Learn more about The Maritime Aquarium’s exhibits, events and IMAX movies at the aquariums’ website.