For its rapid and broad response in providing live virtual science lessons to schools suddenly thrust by COVID-19 into online learning, The Maritime Aquarium at Norwalk is being honored for the best educational initiative in 2020 by any zoo or aquarium in the country.

The Aquarium’s implementation of — and the global reception to — a new slate of STEM-based virtual programs received the top award for education on Wednesday, during the annual conference of the 241-member Association of Zoos & Aquariums (AZA).

In presenting the 2021 award, the AZA judges said, “This program has impressive reach and is connected to many diverse communities around the world with its inclusive approach of different languages and abilities.”

Since the pandemic hit in spring 2020, The Maritime Aquarium has live-streamed standards-fulfilling lessons on animals, conservation, habitats and other marine-science topics to more than 38,000 students and individuals in 44 states and on five continents — North and South America, Europe, Asia and Africa. 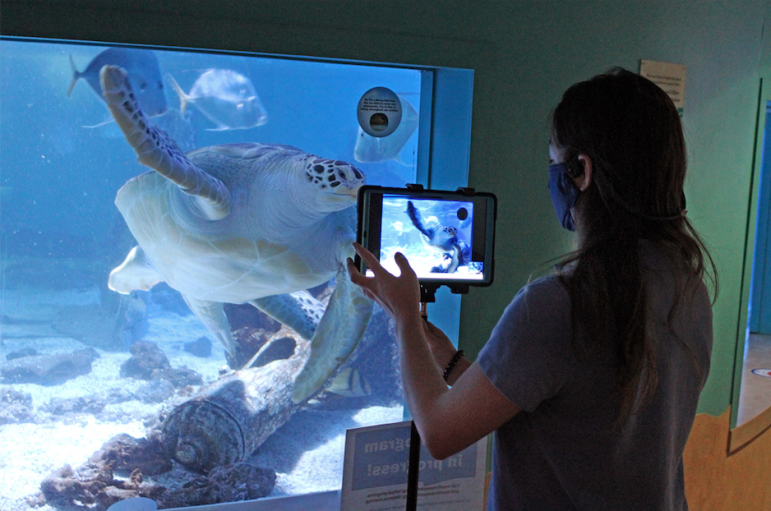 Gianna Palladino, an educator with The Maritime Aquarium at Norwalk, presents a recent livestream virtual educational program about sea turtles.

Tom Naiman, the Aquarium’s vice president of education, said it’s significant that this is the first time the AZA has presented a top education award for a virtual program.

“The educational reach of zoos and aquariums is extending far beyond their physical walls, and far beyond what had been the traditional limits in the relationship to their audiences,” Naiman said.

“At a time last spring when students, teachers and parents were desperately in need of science content and educational structure, zoos and aquariums provided it,” he said. “And The Maritime Aquarium especially fulfilled this vital need quickly, broadly and effectively.”

What Helped the Aquarium Do It

Naiman attributed the success of the Aquarium’s virtual programs to several factors, including:

—how quickly the Aquarium was able to adapt its regular “in-person” educational presentations into virtual offerings;

—that the programs always are presented live by two educators with the opportunity for student interaction (as opposed to pre-recorded programs offered by many other institutions); and

—the high quality of the content, which leads to repeat registrations and positive “word of mouth.”

The Education Program Is Sticking Around

The Maritime Aquarium’s Education team works closely with schools throughout Connecticut and New York, providing (in a normal year) STEM-education experiences to some 80,000 students a year.

With the 2021-22 school year now under way but schools still under COVID restrictions, the Aquarium’s current slate of educational programs is available here.

Naiman said the online programs will remain part of the Aquarium’s educational offerings beyond the pandemic. Among the reasons, he said, are they’re more affordable for schools, and they allow the Aquarium to provide access to aspects of animal husbandry that are impossible to show to a large class of students in-person.

Similarly, the Aquarium will continue to offer occasional live virtual programs for families and individuals. See the offerings and sign up here.

“The pandemic has profoundly impacted all aspects of our lives, but none more so than those of our children and students, who have lost 18 months of critically important in-person education experiences,” said Patlis, the Aquarium president.

When the Norwalk Public Schools were forced to close because of COVID last year, the Aquarium reacted quickly to support teachers thrust unprepared into distance-learning lessons.

After meeting with NPS officials on March 13, 2020 — the day that both the Aquarium and the city schools closed — the Aquarium education team adapted 10 pilot programs and had them ready to be incorporated into teachers’ online curricula by March 23.

“The Maritime Aquarium moved literally overnight to stand up an entirely new paradigm of interactive virtual learning, and to fill the void left by the sudden closure of schools across the nation,” Patlis said. 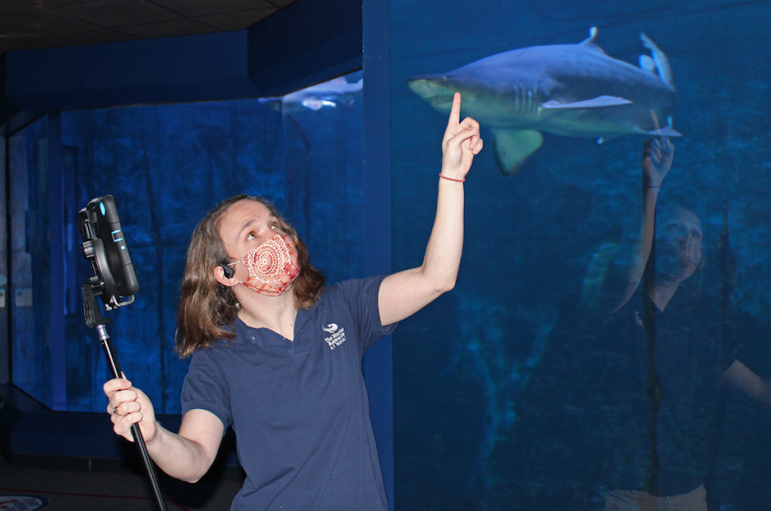 Bridget Cervero, an educator with The Maritime Aquarium at Norwalk, presents a livestream virtual educational program about sharks to students in Turkey on Feb. 12.

As schools everywhere closed, word quickly spread about the Aquarium’s live virtual offerings, which eventually expanded to 23 standards-based K-12 programs and to also include regular presentations for the public, programs in Spanish, two weeklong sessions of a virtual summer camp, programs with American Sign Language translation, and programs adapted for students with autism and Down’s syndrome.

“The positive response of teachers, parents and students confirmed the value of our programs,” Patlis said.

The accomplishment was performed even as The Maritime Aquarium itself was challenged by pandemic-related closures and restrictions.

With the Aquarium closed to all but essential staff from March 13 to June 20, 2020, programs at first were presented by Aquarium educators live from their homes, supplemented by videos of seals, sharks and other animals filmed by members of the Animal Husbandry department.

When the Aquarium reopened on June 20, the virtual programs started to be streamed from a dedicated classroom “broadcast” space in the Aquarium, with live feeds from in front of animal exhibits and behind the scenes.

By June 2021, The Maritime Aquarium had presented 1,644 virtual programs to schools, reaching 27,344 students, as well as family virtual programs to another 11,343 viewers. Schools and individuals have joined in from as far away as Turkey, Indonesia, Brazil, India, Nigeria and South Korea.

In Six Years, Five Awards for the Aquarium

This is the fifth AZA Award in the last six years for The Maritime Aquarium’s educational initiatives.

Last year, the AZA presented a Significant Achievement award in education to The Maritime Aquarium’s “Sound Resilience: Get on Board!” program, a four-year public outreach that engaged 2,000 local middle- and high-school students in modeling how to brace our coastline against climate change.

In 2019, The Maritime Aquarium won two AZA awards. The Aquarium’s training program for volunteers received the top award for Volunteer Engagement. And an initiative to make the Aquarium — and 10 other Fairfield County attractions — more accessible to guests with special needs received a Significant Achievement award in Diversity. Both efforts were initiatives of the Aquarium’s Education department.