What is the question to which your Life is the answer …? Who was loved more than he knew? 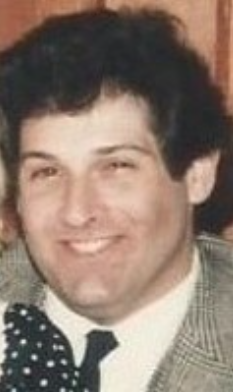 George Lombardo, 64, passed away Aug. 31. His funeral, in Stamford, followed by a reception in Darien, will take place on Thursday, Oct. 7.

His wife and soulmate, Sally, held his hand; at his feet sat his dogs, Simon and Illy; on his stomach lay his cat, Maggie, who touched noses with him the moment after he was gone.

— lyrics from the musical “The Good Lie” by George Lombardo

George was born in Stamford on May 8, 1957 to Patsy and Grace (Tarzia) Lombardo; the second of five children. A creative boy, George embraced Jazz through his father and cooking through his mother. He delighted in singing and was a natural at baseball…

Live to be bold and just go for the gold: Push hesitation aside… — lyric from the film noir musical “Vendetta” by George Lombardo

George met his wife of 33 years while they performed in the play, “George Washington Slept Here” with the Darien Players. Sally first laid eyes on George 15 years earlier when he marched in the Stamford Memorial Day Parade where he played a ridiculously, over-sized bass drum that she recalled made her heart vibrate as George strolled by; she was five years old…

How do you tell, the one you’re in love with That she’s been your soulmate since—The tender age of five years old — from the musical “Voices” by George Lombardo

Constantly reinventing himself, George was a theatre teacher, director and composer at his beloved Crystal Theatre, Darien Arts Center and Phoenix Academy, a freelance writer and proofreader at the Darien News~Review, owner of Lombardo Livery and a TV commercials and voiceover actor.

He performed off-Broadway, made the best eggplant parmesan around, composed six full-length musicals and 50 one-act musicals with Sally, was a drummer at Crystal Theatre and lead singer of the rock band, Below Street Level.

And how George loved classic movies! His favorites were “Shane,” “The Quiet Man” and “It’s a Wonderful Life.” He could name any actor in any film, did spot-on imitations and could sing anything from opera to Led Zeppelin (favorite band).

A natural at math, he easily designed and built his own deck, stairs, cabinets and shelves—carpentry was taught to him by his kindly friend and father-in-law, Steve Szabo. He always beat Sally at chess, knew his sports stats and could harmonize at the drop of a hat.

He couldn’t wait to play Santa Claus every Christmas (since 1988) at schools, Darien’s Methodist Preschool and on stage. Playing Santa, George directed Sally’s musical “The Christmas Toys” four years in a row while organizing the event as a charity for Darien’s The Center for Hope.

During his last days, George’s faithful dogs never left his side with Simon beside him in bed. The last music he heard was Sally playing her harp and then the full score of their favorite musical “Vendetta” on the CD George created with him and Sally singing all of the roles together…

Now I can fly! I live to sing my song! I can’t deny my faith in You has made me strong…!
I know the Light of Heaven; it shines from above,
I know my Lord and Savior; I give Him all my Love!” lyrics by George Lombardo

A Celebration of Life will take place on Thursday, Oct. 7, 2021 at 10:30 a.m. at St. Maurice Church, 358 Glenbrook Road, Stamford, officiated over by George’s cousin, Bishop Robert Lombardo. A reception will follow at the Darien United Methodist Church, 345 Middlesex Road in Darien at 12 noon.

— This obituary was published by the Darien Times on Legacy.com where online condolences may be left.