Lorraine Salvatore, a resident of Darien for 45 years, passed away peacefully sometime before dawn on Saturday, March 21. She was 86. 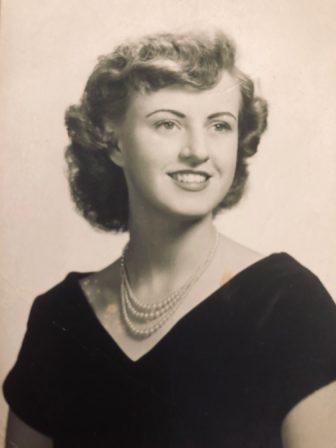 Lorraine Salvatore, 86, passed away March 21. A memorial service is planned for late summer.

One of seven Cloughley children, Lorraine moved from Jersey City, New Jersey to Stamford as a young woman just starting out. She found an apartment in the Cove section of Stamford, living above a lovely Italian woman she called Nonni.

Nonni had a handsome young nephew who had immigrated from Italy a few years earlier. A match was made by the grandmas; eventually the young couple married and moved to Darien’s “Little Italy.”

Lorraine settled right into Noroton Heights, working at Stoler’s, Palmer’s, and lastly at what was known in the neighborhood as “the Prayer Factory.” These jobs kept her close to home so she could be there for her two children.

In her spare time, Lorraine began a candy business out of her home called “Candy Craft Originals.” She made chocolate novelty pops, bonbons, and more intricate designs for special occasions.

She loved decorating for holidays. She had a wonderful sense of humor. On hot summer days, she was known to sneak up on a lazy kid to drop a load of warm laundry fresh out of the dryer on them.

She had a curious habit of giggling when someone stubbed his toe or banged her funny bone. She never let you out of the house with wrinkled clothes, and she made sure you sat up straight.

She was a devoted mother to both her children. She believed them capable of anything.

She loved show tunes and swing music but also adored Barbara Streisand and the BeeGees. Most recently she got into the Eagles, despite her insistence that she never did care for that rock ‘n’ roll stuff.

She loved bright colors and costume jewelry. She was friendly to everyone she met and strangers felt comfortable opening up to her.

In her later years she and her late husband, Lorenzo, moved to North Branford. Lorraine delighted in family pool parties in her backyard. Her greatest joy in life came from spending time with her grandchildren.

A private, family service was held in Spring Grove Cemetery in Darien. A memorial service is planned for late summer. In lieu of sending flowers, please plant some.