From 11:35 a.m. to 11:52 p.m., a thief removed two bicycles, both locked, from each of Darien’s two train stations, according to surveillance video records, police said. In those 17 minutes, the man stole property valued at a total of $1,400 by the separate owners.

Darien police describe the thief as a stocky black male who was wearing a white tee shirt and blue jeans, and with a black backpack.

At the Noroton Heights Station

The surveillance video record indicated the man stole the bike at 11:35 a.m.

At the Darien Station

At 8:19 p.m., police received the second call from a man who said his bike was stolen at the Darien station, where he had left it at 5:30 a.m. and returned to find it missing at 7:30 p.m. He estimated the value of the bicycle at $500. Security camera recordings appeared to show the same man shown in the other video taking the bicycle at 11:52 a.m.

Police are continuing to investigate the thefts.

Contrast the security camera situation at Darien’s train stations with that of a gas station in New Canaan, which was able to give police there images of a license plate that was used to identify a Darien man who, police say, didn’t pay his $23.96 bill after pumping gas.

In Darien, police have said, they often haven’t been able to identify license plates with the limited video surveillance coverage.

The camera or cameras at the gas station only had to cover limited areas, and Darien and Noroton Heights train stations are big, so the license plate of a thief’s vehicle is going to be harder to spot. Harder — but not impossible, since there are limited exits and entrances at the stations, and they might be configured to slow down or limit a driver’s options.

Vehicles could also park outside the station. That would be harder and more expensive to cover with security cameras, but not impossible. Cameras covering streets in business districts might also help with investigating other crimes.

And we only need to make thefts of bikes, motorbikes, vehicles and vehicle parts more difficult than it is in neighboring towns to shoo the thieves away from here. Let’s look into this as an investment.

Last September, after four thefts of bicycles in a short time from both stations, Darienite.com asked police Detective James Palmieri, a spokesman for the department, what police are doing and what bicycle owners can do to make the thefts less likely. The questions were asked and answered in an email exchange.

Here’s what we reported: 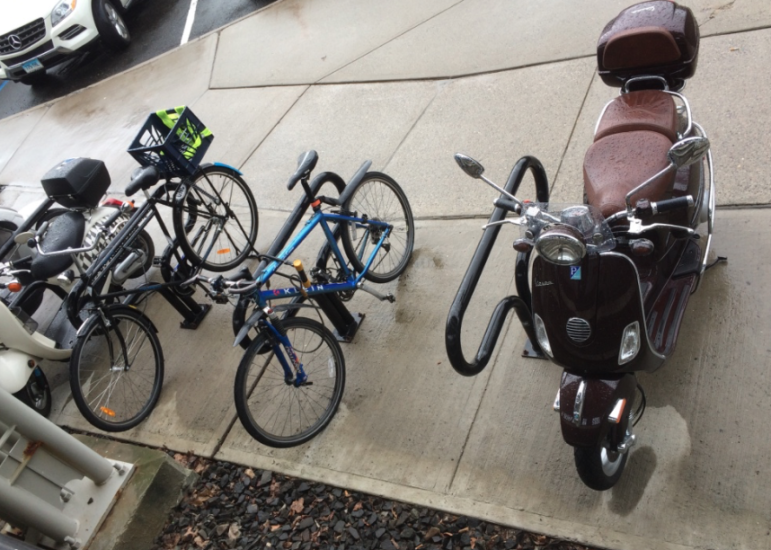 The blue bike near the center of this 2016 Darienite.com file photo is locked, but with a cable lock, not a U-shaped lock. The rack it’s attached to is designed to make it easier to lock the bike.

Here’s what Palmieri said in an email exchange:

Palmieri: Yes, we have a general time frame that seems to be when these bikes go missing so we have been watching during those times.

Q: Are there specific kinds of locks that can be used to make these thefts more difficult? Was there anything about the locks used for these stolen bikes that made them easier to cut than other locks? Would the department recommend locks with certain features?

A: I think that those smaller chain-style combination locks (with vinyl over chain or wire) are more easily cut than the more expensive U-shaped locks. It’s certainly more of a deterrent.

Q: Can bike owners do anything else to make it harder on thieves?

A: One issue we have is that people don’t record the serial number of their bikes after the purchase. If we were to see a suspect riding a bike similar to the one stolen, it’s difficult to show that the suspect didn’t buy the same one of off the rack at Walmart, for instance.

Also, if someone pawns a bike for money, the serial number is filed with the transaction as well as a copy of the person’s ID who pawned it. We can search pawn records for the stolen bike’s serial number.

Lastly, it allows us to enter a “stolen bike” file into the Connecticut law enforcement systems. That way if I bike is found, any law enforcement agency can see that we have reported it as stolen. Without the serial number, we have fewer tools to work with.

Q: A while back a different type of bicycle rack was installed at the Noroton Heights station in order to make bicycles easier to secure when they’re locked to it. Were they used with these stolen bicycles at the Darien station? Would that have made a difference?

A: The rack didn’t really play a factor here as the locks were cut. No matter what your bike is locked to, if the lock is severed the bike is free.

One thought on “Locked and Unloaded: Two Bicycles Stolen in 17 Minutes, One from Each Darien Train Station”