So what does a day in the life of a Darien student look like?

Now describe it in Spanish for an international audience.

That was the challenge for Darien High School (DHS) seniors in Jonathan Smith’s class, who made documentary films that have been shared with 25 Spanish-speaking schools in countries such as Argentina, Colombia, and Mexico.

Darien is the only American school participating in the Canary Island-based Educación Vital project,  which has just received an international award.

The main Darien documentary film submitted includes drone footage of DHS; on-location shots in the library, art room, and cafeteria; and clips of various after-school activities Darien students may get involved in like swimming and dance. 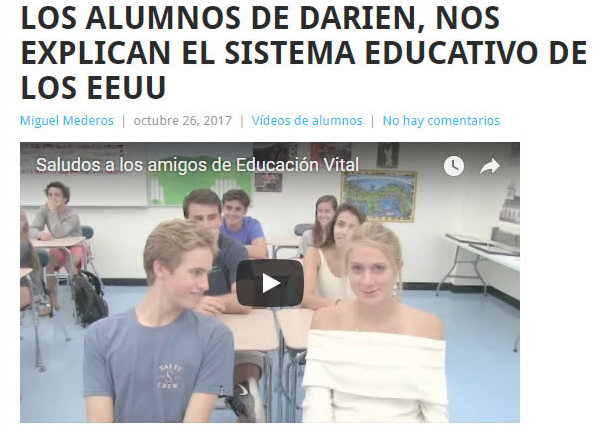 There is even a night-time dinner scene complete with cooking and a dog resting on the couch. Another film post (picture above) features classroom-based student interviews about going to school in Darien.

Student leaders assigned work to each member of the class like filming specific sequences and preparing voice-over narration, for example. Both films were entirely in Spanish, Smith said.

“As a project-based assessment, the Educación Vital platform gives students an opportunity to use their Spanish language skills to generate content and to respond in writing and on-camera to the videos made by students in other countries, using both technology and language learning in an authentic context, beyond the walls of our school,” said Smith. “The great response their creative work has received from other countries has been a gratifying motivator.”

Editor’s note: Or take a look just below:

Marc Marin is district director of instructional technology. This article is republished from the Darien Public Schools News of the Week newsletter.