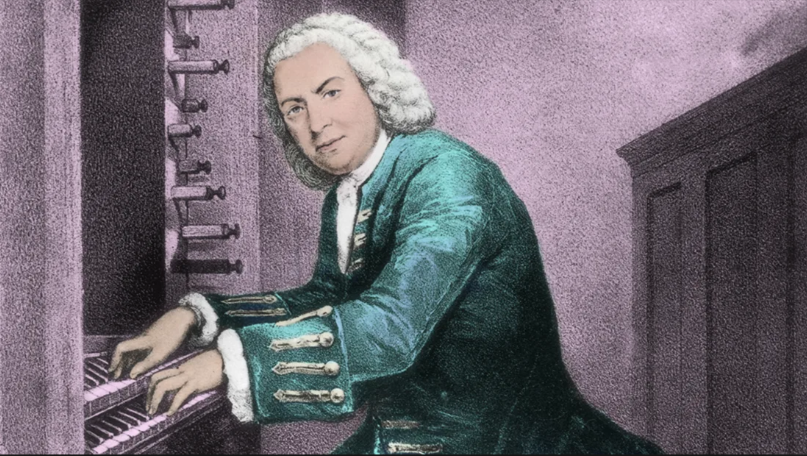 1908 Bach statue in front of St. Thomas Church in Leipzig

Learn about Johan Sebastian Bach, one of the world’s greatest composers from Gil Harel, a musicologist and music theorist, in a series of four Tuesday night talks starting July 9 at Darien Library.

— This article adapts various Darien Library announcements and information from elsewhere, as noted.

Harel’s lectures, meant for the general public, cover Bach from his early years to his quest for musical perfection. Though under appreciated in his own time, later generations would come to venerate his music in a way that Bach himself surely could never have fathomed.

Each lecture starts at 7 p.m.

Darien Library will make each lecture available in an online video here, as it has with has with Harel’s past lectures, including his series on Beethoven, Mozart and liturgical music. 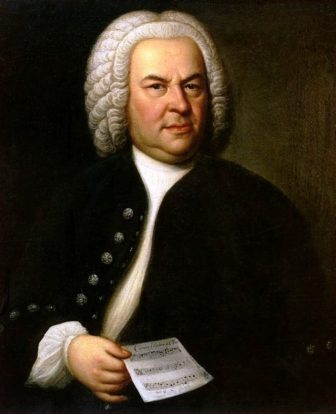 Johann Sebastian Bach (aged 61) in a portrait by Elias Gottlob Haussmann, copy or second version of his 1746 canvas. The original painting hangs in the upstairs gallery of the Altes Rathaus (Old Town Hall) in Leipzig, Germany. A close-up view of what he’s holding is at the bottom of this article.

The name “Bach” is synonymous not only with the apogee of baroque music, but also with the complexity of the art that flourished during that period. During this program, we will look at Bach’s early years and attempt to understand the world in which he lived.

Having grown up in a famously musical Saxon family, Bach’s genius has been described as a combination of genetics and an intangible factor that mysteriously presents in an infinitesimally small number of human beings.

For Bach, this early genius was channeled into keyboard works that continue to compel and enchant listeners today, as well as vocal works known as “cantatas.”

Understanding the composer’s “purpose” may be gleaned from the three letters found at the end of so many of his manuscripts: “Soli Deo Gloria” – Glory to God alone.

We don’t know if any of this will make it into Harel’s lecture, but according to MentalFloss.com:

(more below from the same source, except as noted)

The Brandenburg Concerti and other Instrumental Works 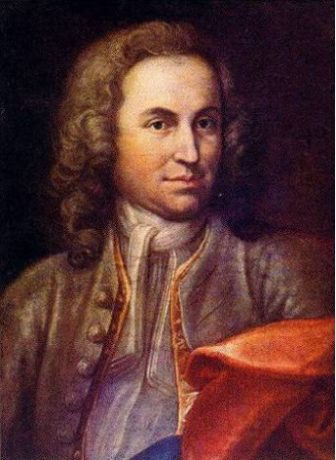 A young Johann Sebastian Bach is said to be represented in this portrait, although that’s been disputed.

Though he spent most of his career in service to Lutheran churches, Bach spent an eventful six years at the court of Anhalt-Köthen.

It was in this Calvinist principality that the composer would write some of his most celebrated instrumental works, including a collection of six concerti dedicated to the Margrave of Brandenburg.

In these works, the composer redefines the baroque concerto grosso, pushing the boundaries of what instrumental ensembles could be expected to play in the early 1700s.

Lamentably for Bach, this was not a lucrative venture, and these widely-acknowledged masterpieces would collect dust on the shelves of history until nearly 100 years after his death.

Other works to be discussed include the Chaconne in D minor for solo violin, and the Italian Concerto.

The Leipzig Cantatas and the Passion Settings of J.S. Bach 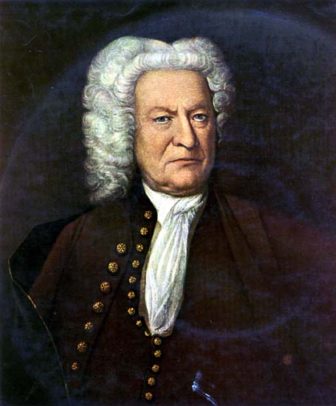 The “Volbach Portrait,” about 1750, possibly of Johann Sebastian Bach.

Though he was not considered a top-tier candidate at the time, Bach was ultimately hired for what would be his longest-tenured job: Kapellmeister of the St. Thomas Church in Leipzig.

It was during the early years of this appointment that Bach would write some of his most celebrated church cantatas, including BWV 140 – Wachet auf, ruft uns die Stimme (‘Awake, calls the voice to us’) and BWV 51 – Jauchzet Gott in allen Landen (“Exult in God in every land”).

It was also during this period that the composer would write some of his most expressive music in the form of his two Passion Oratorios. 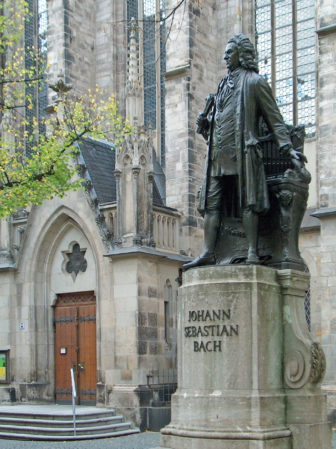 Photo by User:Zarafa on Wikimedia Commons

Statue of Bach (from 1908) in front of St. Thomas Church in Leipzig

In 1747, Bach would meet with none other than the King of Prussia himself, Frederick the Great.

A Francophile who harbored antipathy towards religion and fancied himself a musical luminary, Frederick’s goal during that fateful meeting was undoubtedly to embarrass the sexagenarian composer.

Here we will explore the story of the “Musical Offering” and see how Bach turned the tables on the sanctimonious Prussian monarch.

The composer’s death in 1750 came to mark the end of the baroque period, but before he would finally succumb at the age of 65, Bach continued to plumb the depths of the polyphonic, fugal style with which he is synonymous.

In his “Art of the Fugue”, “Goldberg Variations” and other works, he seemingly exhausts every musical device or idea available to a composer in the mid-18th century.

Though under appreciated in his own time, later generations would come to venerate his music in a way that Bach himself surely could never have fathomed.

Currently, he teaches at Naugatuck Valley Community College, where he was presented with the “Merit Award for Exemplary Service to the College.”

At NVCC, Dr. Harel conducts the college chorale, a cappella ensemble, teaches music history and theory, and serves as musical director of theater productions. Outside of teaching, he enjoys staying active as a pianist and vocalist.

Bach holds his own —in particular, his “Riddle Canon” in this closeup from the Elias Haussmann portrait shown at the top of this article