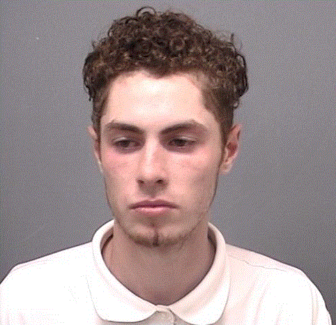 June 25, 2019 arrest photo of Harrison Constantine, 19, of Stamford, charged with driving while intoxicated.

Harrison Constantine, 19, was driving southwest on Christie Hill Road near the intersection of Top O-Hill Road when he crossed the double-yellow line, sideswiping the other vehicle.

Constantine’s 2006 Honda Accord then drove off the right shoulder of the road and hit a rock wall. When police arrived at the scene, they saw him standing next to the car with a cut on his lip. He declined medical treatment.

Police also smelled alcohol on him, thought he seemed to be intoxicated by alcohol or drugs. He didn’t adequately complete the field sobriety tests police had him perform, and they arrested him.

At Darien Police Headquarters, he refused to take a breath test for alcohol content, urinated in the booking area and “soiled his cell,” according to a police news release. He was charged with driving under the influence, failure to drive on the right side of the road and, for actions in the police station, third-degree criminal mischief.

Constantine, of Howes Avenue in Stamford, was later released on a $500 bond and is scheduled to appear July 5 in state Superior Court in Stamford.