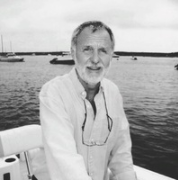 Langdon Clark, who passed away recently at the age of 66, will have a memorial service Aug. 26 on Martha's Vineyard.

Langdon Payne Clarke, “Coach Lang” to many people, recently passed away on Martha’s Vineyard. He was 66.

Formerly of Darien, Connecticut, Lang will be forever known for his involvement as co-founder of the Darien Youth Lacrosse Program.

Langdon Clark, who passed away recently at the age of 66, will have a memorial service Aug. 26 on Martha’s Vineyard.

Whether it was handing out deli sandwiches to his volunteer coaches or driving around town in his Jeep with lacrosse sticks, Lang was on the playing fields all spring long sharing his love of lacrosse.

Formerly an asset manager at Merrill Lynch and Trinal Investments, he was a board member at the Darien Depot Youth Center and CONNY Lacrosse and a member of the Tokeneke Club.

Upon moving to Martha’s Vineyard in 2004, Lang worked in real estate and was recently associated with Point B Realty in Edgartown. He continued to coach lacrosse at the high school, volunteered with the Vineyard House and loved to fish all around the island.

He is survived by his two children, Alex Clarke and Christie Clarke Napier; their spouses Natalia Clarke and Brent Napier; his three grandchildren, Warner, Nina and Kacper and his former wife Pamela Griswold Clarke.

In lieu of flowers, the family asks that donations be made to the Darien Athletic Foundation in honor of the Darien Lights Brigade. The lights for the athletic fields in Darien are something for which Lang campaigned strongly from the start and he would be proud to know it was coming to fruition. Donations may also be made to the Vineyard House on Martha’s Vineyard.

A memorial service will be held on Saturday, Aug. 26, 2017 at St. Andrew’s Church in Edgartown, Martha’s Vineyard.