Ken’s favorite words to say were “thank you” and “I appreciate it” and in typical fashion those were his parting words to his family and nurses at the time of his death. 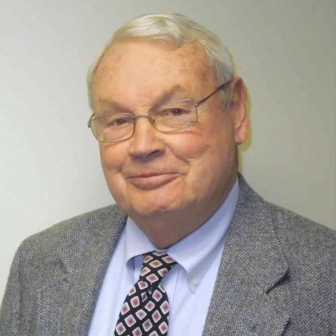 Kenneth Kermes, 87, passed away Sept. 7. A celebration of his life will take place Oct. 8.

Born May 21, 1935, in Lafayette, Indiana, Ken was on the move living in numerous places before settling down with his family in Darien. After graduating in 1953 from Darien High School, Ken left for Amherst College where he played football and was an accomplished track and field star along with being a class leader.

Immediately following graduation Ken enlisted in the Navy and attended flight training school in Pensacola, Florida to learn the “art” of take-offs and landings. He was commissioned as a Naval carrier pilot and assigned to the carrier U.S.S. Independence while stationed in Norfolk, Virginia and Quonset, Rhode Island. Ken also attended New York University for graduate school and later in his career Harvard Business School’s Advanced Management School.

In 1958, during his first year of flight training, Ken married his high school sweetheart Susan Pennock. Before ending his military commitments and starting his business career, Ken and Sue first had Suzanne (Suki) and then Rob.

In retirement Ken and Sue settled in South Kingstown, Rhode Island, where he started his “second career.” Ken continued his executive leadership roles with South County Hospital, University of Rhode Island and Brown & Sharpe, always looking to find the company or organization that could benefit from his skills while never being afraid of a challenge. At every stop, Ken met people who positively shaped his life forever.

More importantly when someone asked Ken and Sue for support, they typically said, “how can we help” and warmly solicited others to support the cause. Among other organizations they provided the founding equity support for the South Kingstown Education Foundation.

There was no place he felt more passionate about than HopeHealth Hospice Center and South County Hospital for which Ken served as a board member and chairman. Ken and Sue were awarded honorary doctorate degrees in 2006 from the University of Rhode Island for their commitment to giving.

Ken loved to support charitable causes and encourages others to do so as well. In lieu of flowers, Ken would be most “thankful” if you considered South County Hospital, HopeHealth Hulitar Hospice Center or the The Chris Collins Foundation. Chris Collins was an accomplished South Kingstown athlete, attended Amherst College and battled anxiety and depression before he died by suicide in 2018. He was an inspiration to many, and Ken loved to put energy into the good cause of supporting today’s youth.

— This obituary is from the Avery-Storti Funeral Home, where online condolences may be left.