Judith Kleinhans Holding, a teacher, chaplain, and source of inspiration for her family, friends, and the countless others whom she served with grace and humor, died peacefully on May 29, 2021, in Etna, New Hampshire, loved ones by her side. She was 81. Her husband of 55 years, Bill, died in 2018. 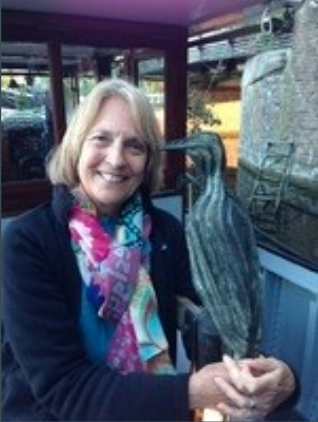 Judith Holding, 81, passed away on May 29. Her funeral will be on June 25 and will be livestreamed.

For the past two decades, Judy worked as a chaplain at Greenwich Hospital in Connecticut, providing pastoral care to oncology patients, their families, and hospital staff across all faiths and traditions.

Over the years, she was also actively involved with several service organizations, including the Center for Hope and Person-to-Person in Darien, and served on a number of boards, including the Berkeley Divinity School at Yale University, New Canaan Country School, and the ‘Sconset Trust conservation organization.

Judy brought a healing wisdom and faith to every situation, coupled with her infectious smile and boundless optimism.

She was engaging and fun, with a twinkle in her eye and a mischievous sense of humor. She loved to dance, kicking up her heels and trading stories with appreciative glee. In the summer, she could often be found zooming around Nantucket Harbor on her motorboat aptly named “Spirit.”

Her true joy, though, was spending time with her family and friends: in the garden, on the golf course, by a fire singing Christmas carols, on the beach soaking up the sun, feasting on cherrystones and cheeseburgers, or in the fields, teaching her grandchildren to identify the distinctive songs of the birds she prized. She lived her life in full by sharing it with others.

Judy was born in 1940, spent her childhood years in Shanghai and as a teenager studied in both Canada and France. These experiences nurtured a passion for travel that would last throughout her life.

After graduating from Smith College in 1962 and marrying Bill later that year, Judy joined the faculty at the Low Heywood School in Norwalk, where her course on English and ethics was particularly popular. Along the way she earned a master’s degree from Fairfield University, concentrating on Shakespeare.

In 1976, Bill’s career as an executive with Morgan Guaranty Trust (now JPMorgan Chase) took the family to the Netherlands, where they learned Dutch and formed deep and enduring friendships.

Upon their return home in 1981, Judy found a group of kindred spirits who enjoyed exploring the world. They called themselves the Hiking Club, and their annual trips took them to places ranging from the American West to Iceland to the Camino de Santiago in Spain. This group of amazing women would remain some of Judy’s closest friends over the years.

Judy also enjoyed traveling with Bill to Cuba and Russia and other destinations as members of the Yale Alumni Chorus, using the power of music to bridge differences among people.

In 2008, Judy earned a second master’s degree, in religion, from Berkeley Divinity School. She was commissioned by the Episcopal Church as a hospital chaplain.

St. Luke’s Parish in Darien was Judy’s spiritual home and, since her teenage years, was one of the places she cherished most. She was involved with the church in almost every imaginable way: serving several terms on the vestry, serving as a lay Eucharistic minister, participating in the altar guild and on various committees, taking and teaching a course on Education for Ministry, and singing in the choir.

Judy also was an active member and leader of the Siasconset Union Chapel on Nantucket Island, where she and Bill loved to spend time throughout their marriage.

A memorial service in thanksgiving for Judy’s life will be held at 11 a.m., Friday, June 25 at St. Luke’s Parish in Darien. The service will also be live-streamed on the parish’s website. There will be a reception immediately following the service.

In lieu of flowers, donations in Judy’s memory may be made to St. Luke’s Parish; Siasconset Union Chapel; or Earthjustice.

— This obituary was published on Legacy.com by the Darien Times.