John Bernard McKenna, a longtime resident of Darien and Stamford and parishioner of St. John’s Roman Catholic Church, passed away on July 25, 2019, at the age of 93. 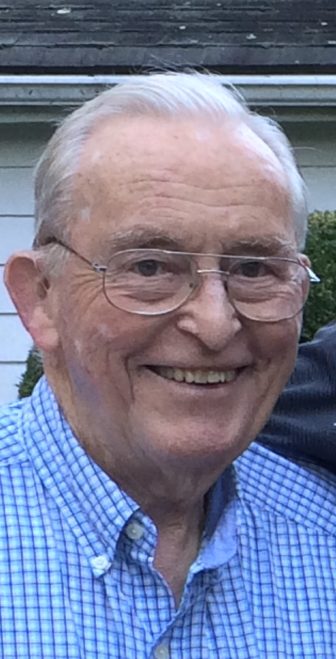 Born Oct. 22, 1925, in Stamford, he was the son of James Edward McKenna of Montgomery, New York and Bridget Gorman McKenna of Ballinamuck, County Longford, Ireland.

He spent his early childhood years on a small family farm on Den Road in North Stamford, attended the Bangall School (Stamford’s last one-room schoolhouse), and graduated from Stamford High School in 1943.

While in high school, he served in the Connecticut State Guard, and as soon as he turned 18, he enlisted in the Army Air Corps. He served in World War II from 1943 to 1946 with the 2nd Weather Reconnaissance Squadron in the China/India/Burma theater in Gushkara, India.

He worked for Machlett Laboratories in Springdale for 43 years, from 1946 to 1989. Additionally, he worked as a special police officer with the Darien Police Department from 1975 to 1985. He was a fourth degree member of the Knights of Columbus, St. Augustine Council and its Lafayette Assembly, receiving his 70-year membership pin last year.

He was pre-deceased by his beloved wife of 44 years, Carolyn Ruddy McKenna, with whom he shared the joy of raising their five children: John P. McKenna (Sandy) of Redding; Caroline Smith (Stephen) of Marietta, Georgia; Patricia Leasure (Dirk) of Darien; Kathleen Gallagher (Charles) of Fairport, New York; and William R. McKenna (Denise) of Fairport, New York.

He is also survived by his cherished sister, Alice McMenamin; a very dear cousin, Mary Cella; 11 grandchildren (Kelly McKenna; McKenna and Connor Smith; John and Luke Leasure; Patrick, Ryan and Neil Gallagher; and Christopher, Hayley and William McKenna), five step-grandchildren (Sarah and Elizabeth Anderson, and Cassie, Karra and Paige Damascus), and many beloved nieces and nephews. He was predeceased by his brother James E. McKenna.

Family will receive relatives and friends from 3 to 6 p.m., Sunday, July 28 at the Edward Lawrence Funeral Home, 2119 Post Road, Darien. A Mass of Christian Burial will be celebrated at 11 a.m., Monday, July 29 at St. John Roman Catholic Church, 1986 Post Road, Darien. Interment will follow at Spring Grove Cemetery in Darien.

In lieu of flowers, memorial donations can be made to the St. John’s Church Youth Group or Outreach Ministries, or to any charity that is meaningful to you.