John (Jack) Droney of Darien passed away peacefully on Saturday, Sept. 28.  He was 94. 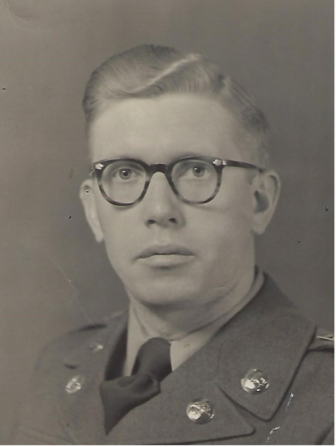 Jack was born April 29, 1925 to John and Kate (Howley) Droney in Bellharbour, County Clare, Ireland.  He was the youngest of four children, who also included Mary (Sisty Scarsbrook), Michael and Martin.

Jack immigrated to the United Ståtes in 1947 with his cousin and lifelong friend, James (Gus) Droney. He arrived in New York, but soon ventured to Stamford to work as a carpenter/handyman for his uncle, Tom Howard, while attending night school at Wright Tech to hone his carpentry and maintenance talents.

His problem-solving abilities, work ethic and trade skills provided him with numerous job opportunities; his quick wit, integrity and Irish charm quickly endeared him to those he worked for and those who were lucky enough to cross his path.

While in Stamford, Jack met Mary (McHugh) and quickly realized that May was the gal for him. But the romance was put on hold; the Korean War was underway, and his new home country drafted him into service in 1950.

— an obituary from the Thomas M. Gallagher Funeral Home, where online condolences may be left

He served two years of active duty in Germany in the military police before returning stateside, where he proudly became a United States citizen.  He served his new country for an additional four years in the reserves.

Jack was employed by Hewitt Robbins in Glenbrook for 18 years, where he was responsible for the overall maintenance and upkeep of the building and its beautiful surrounding property, as well as transportation and assistance to the executives of the company.

In 1970, when Hewitt Robbins relocated to New Jersey, Jack took a new position as supervisor of buildings and grounds for the Wilton school system.

Through his 26 years of service with Wilton, Jack received numerous awards and countless recognition from the Town of Wilton, General Electric, CL&P, and the State of Connecticut for his energy management and conservation initiatives.

He retired from Wilton in 1996, to only again be called into service by Wilton as “Clerk of the Works” for the town’s planned renovation/additions to five schools and turf fields.  He served in that capacity until 2002.

Jack was blessed with the love and friendship of countless persons who enriched his and May’s lives.  He remained fiercely proud of his Irish heritage, but his love for the United States and the opportunities it afforded him was a privilege that he appreciated and embraced throughout his life.

In addition to his children and grandchildren, Jack is survived by his sister Mary, countless loving Droney and McHugh cousins, nieces, nephews, and his sister-in-law Minnie McHugh.

To send on-line condolences to the family, please visit www.gallagherfuneralhome.com