Darien TV79’s Jim Cameron, author of Off the Record: Confessions of a Media Consultant, will speak at 7 p.m., Thursday, April 8 in a Darien Library webinar about communication. 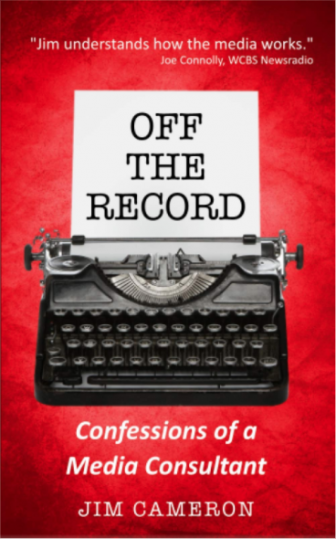 Jim Cameron’s book, “Off the Record: Confessions of a Media Consultant”

In “Off the Record,” Jim will use his 35 years of expertise as a media trainer and share his tips and techniques for communicating with any audience, from mastering tough interviews to creating a motivational presentation.

You can register for this event, here, on Darien Library’s website.

Off the Record: Confessions of a Media Consultant is Jim Cameron’s first book, based on his career as a media trainer prepping C-level executives for challenging media encounters and earlier years as an award-winning journalist at NBC.

Jim Cameron is best known in Connecticut for his decades of advocacy for rail commuters. He authors a twice-monthly newspaper column for Hearst CT Media and is a must-book guest for local radio and TV stations. His success in that field draws very much from the same skills he has taught hundreds in his workshops over the decades.

Darien Library is a Library Journal five-star library. It is among the busiest in the state with over 1,300 people visiting on an average day and has the highest per capita circulation of items in Connecticut.

The library collection includes 125,000 books and 300 newspaper and magazine subscriptions.