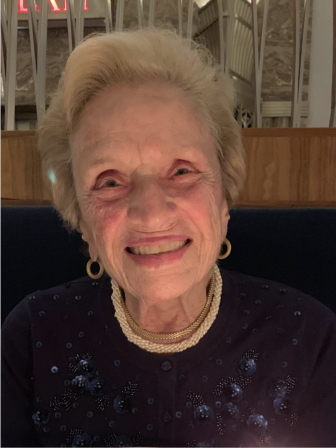 Jayne Sutton, 98, passed away March 14. Her wake and funeral will be private.

Jayne is survived by her daughter Leslie L. Sutton of Darien. She was predeceased by her son Scott T. Sutton in 2002 and her husband Thomas Sutton, former chairman of Dover Corporation, in 2004.

Jayne was born in Cincinnati in 1923 and was the daughter of Charles and Antoinette Harrington. After marrying Tom they lived in Cincinnati for a number of years before moving to Darien in 1967 after building a house in Tokeneke from long distance.

An accomplished cook, Jayne had cooking certifications in Thai, Japanese, Chinese and French cuisine. She especially loved to bake, being famous for her honey pecan squares. She found great happiness at work in her kitchen experimenting with various recipes, as well as in attending multiple cooking and baking classes, especially with her daughter Leslie.

It was New York City, however, that held a very special spot in Jayne’s heart — her love for NYC and its vibrancy was unparalleled. She owned a second home in the Sutton Place neighborhood in Manhattan for over 45 years. She loved to walk the city for hours on end and take advantage of all it had to offer, including but not limited to the arts, fine dining and exploring her favorite neighborhood, Chinatown, where she always found any ingredient she ever needed for cooking the Asian cuisine she loved.

Her volunteer work was extensive and spanned decades, working on behalf of numerous organizations, starting with a Cincinnati orphanage in the 1940s. Additionally she volunteered at the Easter Seals Rehab Center in Stamford and in New York City, putting her special touch on lunches she served to first responders at Ground Zero after the 9/11 attacks. She was also a dedicated member of the St. John’s Roman Catholic Church in Darien for many years.

Jayne loved to entertain and was well known for her great New Year’s Day open houses and the “Derby Day” parties she threw with her son Scott throughout the years.

In addition to her daughter Leslie, she is survived by many nieces and nephews, as well as numerous close friends of all ages who found a supportive, encouraging and accepting friend who was herself ageless and fun, with a great sense of humor.

There are no calling hours and all funeral services will be private. Memorial donations in Jayne’s name can be made to the National Veteran’s Foundation, 5777 West Century Blvd., Suite 350, Los Angeles, CA 90045.