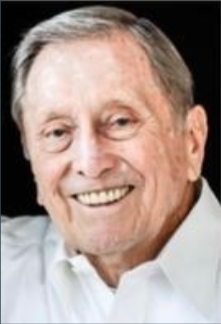 James Haranzo, 93, died May 9. His burial will be private, but a celebration of his life will be held at a later date.

James J. Haranzo, 93, a longtime resident of Longboat Key, Florida, died peacefully surrounded by his loving family at his summer home in Darien on May 9, 2020 after a brief illness unrelated to COVID-19.

James Haranzo, 93, died May 9. His burial will be private, but a celebration of his life will be held at a later date.

Born in Bridgeport, Ohio on Aug. 23, 1926, he was the son of Joseph and Anna Haranzo. He graduated from Central Catholic High School and served in the U.S. Army during World War II.

After the war he planned to pursue his lifelong dream of attending Notre Dame but the local bishop prevailed upon him to join the inaugural class of what is now the Franciscan University of Steubenville. He ultimately fulfilled his dream by graduating from the University of Notre Dame Law where he was co-editor of the Law Review.

Upon graduation, he established a law practice in Wheeling, West Virginia. He practiced law for more than 60 years, often taking on pro bono cases and earning a townwide reputation for kindness and generosity.

In the early 1960s he and two partners purchased Warwood Tool Company, a manufacturer of high quality hand tools which was established in what was then Wheeling, Virginia in 1848. He later became sole owner and president and eventually sold it in 2015.

He was a founding board member of the Health Plan of the Upper Ohio Valley and later served as its chairman. He served on the Building Commission of the State of West Virginia which was charged with rebuilding the State Capitol in Charleston. He served as mayor of the City of Wheeling from 1971 to 1975 and was instrumental in building the Wheeling Civic Center, now home to a professional ice hockey team.

He served as president of Catholic Charities in Wheeling, The Seeing Hand Association and the Community Foundation for the Blind. He also served as chair of the Wheeling Civic Center Board and the Wheeling Hall of Fame Board. He was a longtime member of the Fort Henry Club, Wheeling Country Club and The Allegheny Club.

Haranzo was most proud of his role as husband, father and grandfather. He married Kathleen O’Connor in 1954 and recently celebrated their 65th wedding anniversary.

He is survived by Kathleen and his five children: Lisa Mayer (Alan) of Norwalk, Mark Haranzo (Gilda) of Darien, Laurie Raleigh (Christopher) of New Canaan, Julie Kelley (Bryan) of Darien and Ellen Brooks (Brian) of Darien.

Haranzo was a lifelong fan of the Pittsburgh Steelers as well as the Notre Dame Fighting Irish. He was an avid tennis player who played well into his 80s and he loved to fish in the Gulf of Mexico with his family.

Burial will be private but a celebration of his life will be held at a later date. Memorial donations may be made to the Inner-City Scholarship Fund.