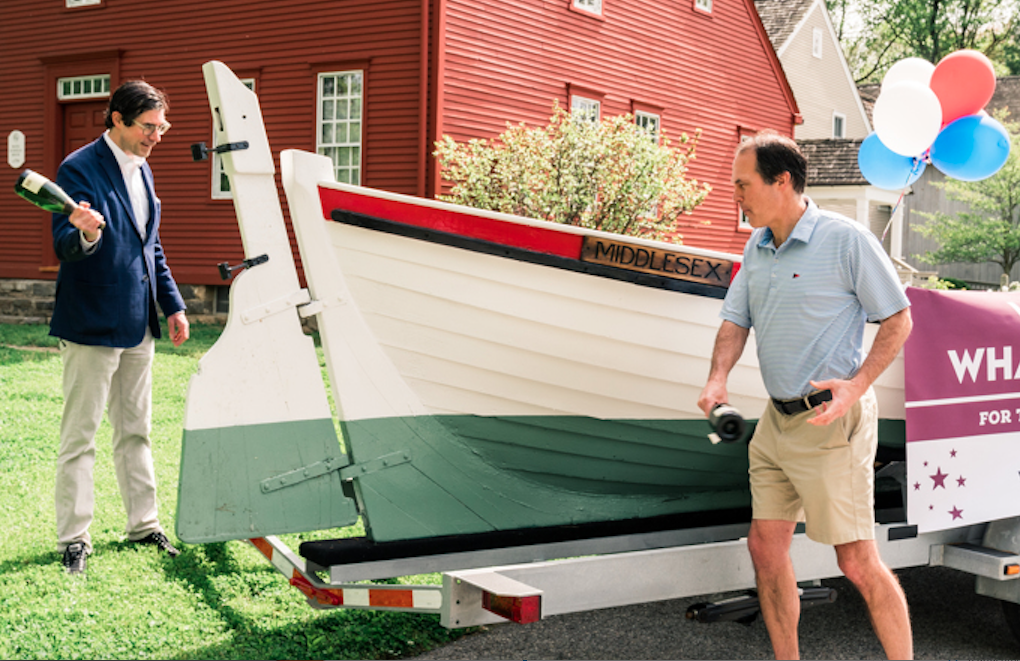 After a long and tempest-tossed journey, the 24-foot whaleboat Middlesex has returned to safe harbor, giving the Darien Historical Society a unique opportunity to help make the town’s Revolutionary history come to life.

“After a nearly 40-year odyssey, I am happy to report that the Middlesex is back home and in shipshape,” said Robert J. Pascal Jr., president of the society’s Board of Directors.

The newly refurbished whaleboat was returned Saturday to the Darien Historical Society, after several decades away and a nearly year-long restoration project. Three senior officers of the Darien Historical Society were there, as well as two representatives from The Darien Foundation, which funded the restoration. All gathered at a safe distance from each other for the unveiling of the boat.

Intended to educate the community about the Whaleboat Wars on Long Island Sound during the Revolution, the society built the boat in the 1970s, and eventually donated it to the Maritime Aquarium (then the Maritime Center), where it had been displayed for years outdoors. 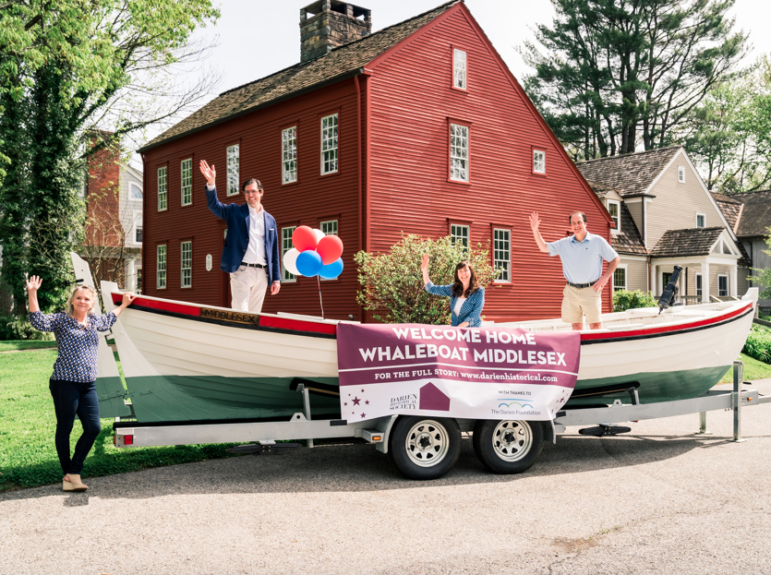 By the time members of the society rediscovered her last year, the little boat’s fate seemed nearly sunk; however, a generous $14,000 grant from the Darien Foundation helped to turn the tides.

“We found the lore of the Middlesex inspiring not only as it calls back to local Revolutionary history, but also the boat played a central role in Darien’s celebrations during the nation’s bicentennial in 1976,” said Sarah Woodberry, executive director of the Darien Foundation. “We are thrilled that kids and neighbors will be able to climb aboard the Middlesex again.”

A new episode from the Darien Historical Society’s series “Our Favorite Things” focuses on the history of the Whaleboat Middlesex.

The whaleboat project was launched by the Society in the 1970s to celebrate the nation’s bicentennial, and building the boat became a community-wide effort. A group met every week at the Ziegler estate to build the boat, while students crafted the oars and rudder.

After being launched to much fanfare in 1977, the boat was sailed in reenactments and used in rowing races throughout the northeast. 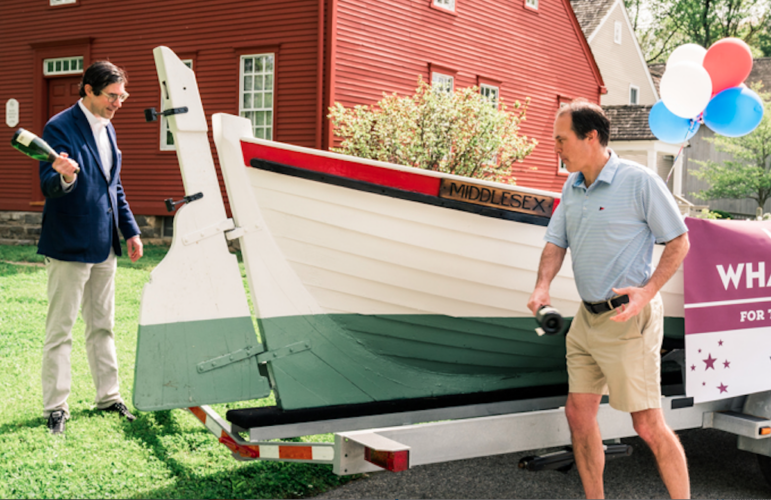 “As one of those involved in the original construction and use of the Middlesex, it gives me great pleasure to see the boat is back in circulation at the Darien Historical Society,” said David Sinclair, who was president of the society’s Board of Directors in the 1970s, during the boat’s construction. “I am sure that everyone, both young and old, who worked on or rowed the boat, will be equally pleased.”

A few years after the boat’s launch, the Middlesex was donated to Norwalk’s Maritime Center, but after the Center switched its mission from a focus on maritime history to an aquarium, the boat was moved outside and sat for years near a stroller parking area at the rear of the building.

Over the years, in an attempt to protect the vessel from the elements, the Middlesex was painted white from stem to stern and holes were drilled in its hull for drainage.

Through a bit of serendipity, the society was able to reclaim the boat, and the Darien Foundation’s grant allowed the Middlesex to be transformed into a “touchable” and transportable exhibit.

While the Middlesex will now be a landlubber, she’s ready to once again take on her original duty: to educate the community about this area’s forgotten local heroes: The whaleboat men.

A replica of a cannon is propped on the bow of the boat. During the Revolutionary War, cannons on swivel mounts had an advantage over vessels with stationary cannon mounts.

“These mariners were our first line of defense against Tory raiders coming from Long Island,” said Society Historian Ken Reiss. “These men risked everything, sometimes engaging in hand-to-hand combat, to prevent the enemy from landing on our shores.”

Eventually, the boat will be featured at town events and transported to schools throughout the region to educate students about the unique role the whaleboat men played in protecting Connecticut’s shoreline communities during the Revolution.

“This is exciting history, and the Middlesex will help to make these stories remembered for a lifetime,” said society Executive Director Maggie McIntire.

Come celebrate our town’s story with us! To learn more the work and mission of the Darien Historical Society, or to support the Middlesex Project and other exciting initiatives, call us at 203.655.9233 or visit our website.

The Darien Foundation is an independent, community-based, 501(c)(3) public charity. Since 1998, it has funded $4.5 million in grants for technology and capital initiatives, which create opportunity for Darien’s youth, support the town’s safety and security services, and enhance the overall quality of life in Darien.

History of the Middlesex Whaleboat & The Whaleboat Wars

The Revolution and the Whaleboat Men

Compared to the towns inland in the Connecticut Colony, America’s War of Independence was a more harrowing experience for people along the coastlines —and in particular, for the people of rural Middlesex Parish, the struggle was more akin to a civil war.

As a smaller community with an outspoken minister committed to the cause of independence, Middlesex Parish became a favorite target of Loyalists, who were forced to abandon their homes and flee across the Sound to British-occupied New York.

These Tory refugees returned on whaleboats to raid former neighbors, and the strife escalated to violent clashes and kidnappings on both sides.

Patriot captains with armed whaleboats became licensed “Privateers” and were authorized to chase down British supply ships and confiscate their cargo.

These Patriot “whaleboat men,” also fended off enemy raiders, and after the war they emerged as local heroes.

“These men were our sea-going militia and they often engaged in hand-to-hand combat. They were considered the heroes of their day, but their stories are largely forgotten,” said Reiss.

The Whaleboat War grew more active and bitter as the Revolution progressed and the violence continued even after Cornwallis’ surrender in 1781.

The activities of the whaleboat men were credited for hastening the evacuation of the British from Long Island.

In the mid-1970s, under the leadership of Board President David Sinclair and Executive Director Patricia Wall, the Society hatched a plan to celebrate the nation’s bicentennial. It had the Middlesex designed by the nation’s foremost naval historian, and then members of this community gathered for months in a garage at the Ziegler family’s estate to build the wooden boat by hand.

The whole community contributed to the effort, with women sewing the boat’s ensign and students crafting the oars and rudder and sewing the sails.

After the craft was completed in the spring of 1977, it was hauled to Pear Tree Point Beach by a team of oxen and launched with much fanfare.

After a few years of races and reenactments, the Middlesex was donated to the Maritime Center, and eventually; the boat was set up as an outdoor display.

Recently, the Society discovered that the boat needed to be moved from the aquarium to make way for a construction project. The Society swung into action to save this treasured artifact from the town’s past and bring the boat home.

With the help of a $14,000 grant from The Darien Foundation, the Middlesex was refurbished in 2020 to enable it to be used as a transportable and touchable artifact.

“Surprisingly, after decades in the elements, with a little TLC, the Middlesex can now be used to both tell the unique story of Darien and to celebrate our forgotten Revolutionary War heroes,” said Maggie McIntire, executive director of the Society.

To learn more about the Whaleboat Middlesex project watch this video and visit us at the Darien Historical Society website. 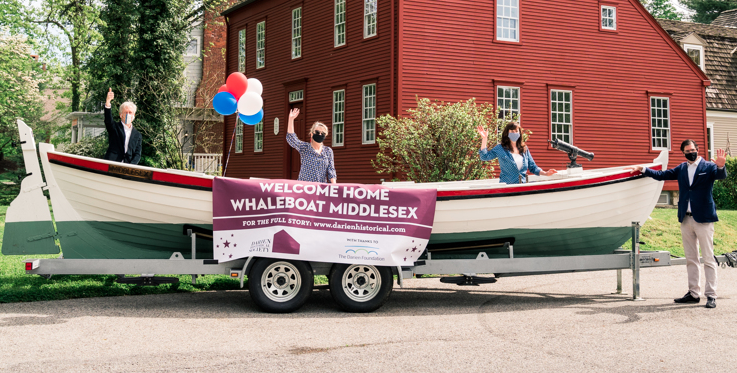