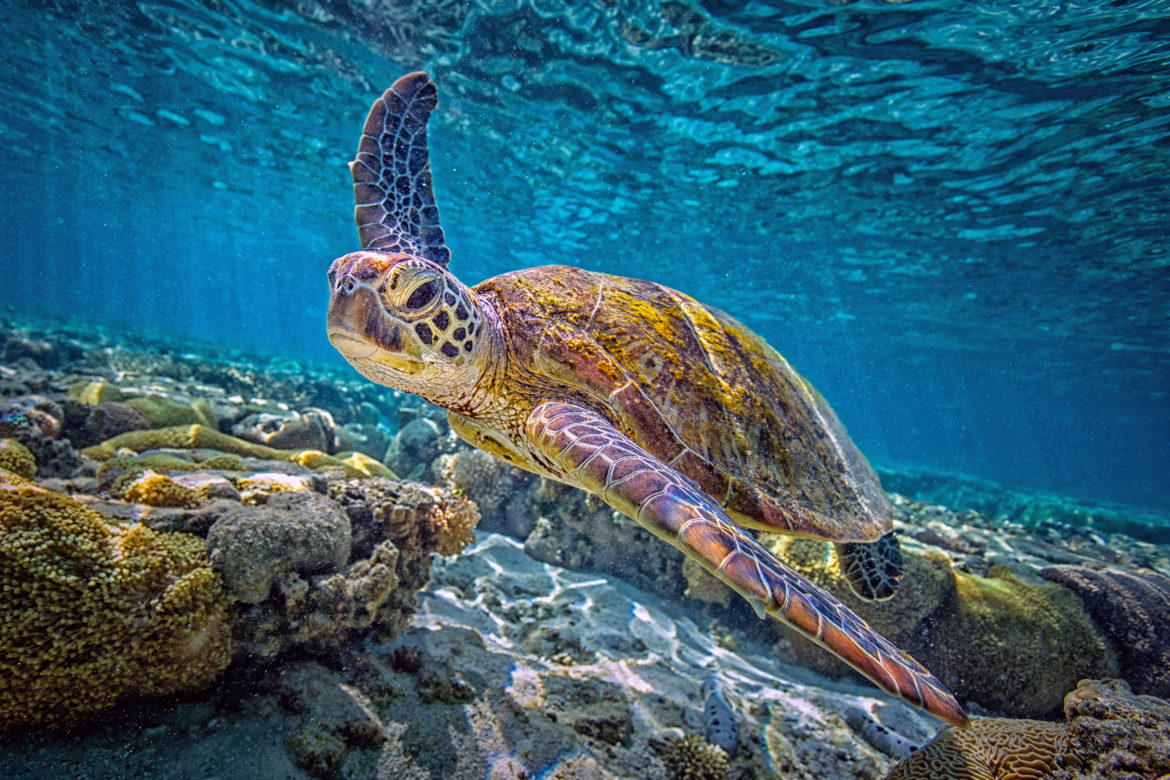 A green sea turtle swims among corals in a scene from “Great Barrier Reef."

Plunge in for an IMAX movie adventure into Australia’s Great Barrier Reef and also visit actual live corals saved from a ravaged Florida reef this winter at the Maritime Aquarium at Norwalk.

— an announcement from the Maritime Aquarium; information about tickets and times are below in the “If You’re Going …” section.

The IMAX movie “Great Barrier Reef,” which opened in mid-December, offers a giant-screen exploration of one of Earth’s greatest natural wonders and introduces audiences to scientists and volunteers working to preserve it.

The film is a timely addition, as the Maritime Aquarium displays a new collection of corals that — it’s hoped — one day will help to save the Florida Reef Tract, America’s largest bank reef.

“The new IMAX movie and our exhibit of live corals work together nicely to explain the serious threats to these vital marine habitats, while also offering hope by celebrating the extraordinary research and conservation efforts being made on behalf of reefs all around the world,” said Barrett Christie, the aquarium’s director of animal husbandry. (A coral is actually made up of thousands of tiny animals called polyps.)

Also at the Aquarium

Narrated by Australian actor Eric Bana, the 40-minute film will play at 11 a.m. and 2 p.m. and 4 p.m. daily in Connecticut’s largest IMAX Theater, with a screen that’s six stories tall.

The theater’s giant screen and 70mm film-projection system combines for the biggest, brightest, clearest images at almost 10 times the resolution of standard-projection formats, so seeing “Great Barrier Reef” is the next best thing to actually experiencing the famed Australian marine sanctuary.

“Great Barrier Reef” follows Jemma Craig, a young underwater photographer and reef native, on an expedition to document the work being done by researchers and volunteers to better understand and protect the reef and its inhabitants.

The film visits the Great Barrier Reef’s first sustainable eco-resort on Lady Elliot Island — where Peter Gash has rehabilitated the remote cay from devastation caused by mining in the late 1800s — and the Fitzroy Island Turtle Rehabilitation Center, where dedicated volunteers nurse injured sea turtles back to health.

With stunning images shot exclusively for the giant screen, “Great Barrier Reef” gives audiences IMAX-sized encounters with some of the fascinating creatures that live on the reef.

Among these are playful dwarf minke whales, thousands of migrating green sea turtles and their hatchlings, a Maori wrasse named Wally whose epic photo-bombing skills have made him a local legend, a male seahorse giving birth, and fluorescent corals whose kaleidoscopic colors are especially vivid when viewed at night. 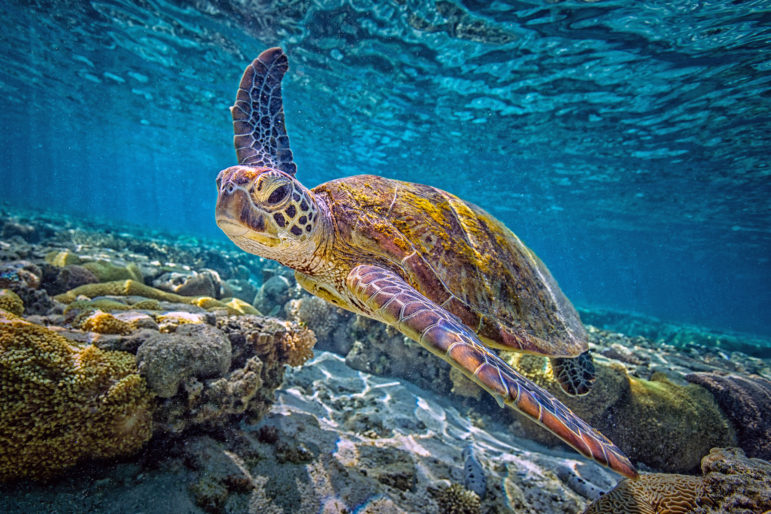 A green sea turtle swims among corals in a scene from “Great Barrier Reef.”

The film also includes cutting-edge coral-husbandry research being conducted at the Australian Institute for Marine Science, where scientists are working to develop hardier corals that will survive long-term environmental changes.

And “citizen scientist” volunteers, who are helping to track the health of the reef, will inspire people to leave the Norwalk theater wanting to get involved in conservation efforts. 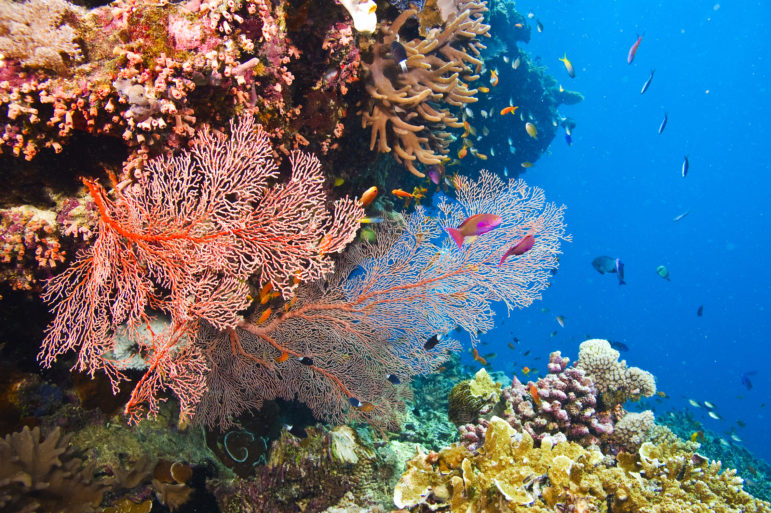 More than 400 types of coral form the colorful backbone of all life on Australia’s Great Barrier Reef.

One coral-conservation effort to support is the the Maritime Aquarium’s display of 35 corals, representing 13 different species, rescued from the Florida Reef Tract, a 360-mile bank reef that extends from Port Saint Lucie down to the Florida Keys.

In recent decades, the tract’s coral populations have been reduced by up to 90 percent, and a new epidemic — called stony coral tissue loss disease (SCTLD) — threatens to take much of the remaining corals. 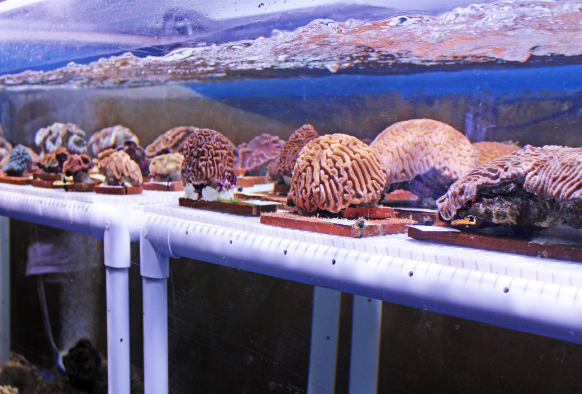 Corals on exhibit at the Maritime Aquarium

The Maritime Aquarium and 18 other select members of the Association of Zoos & Aquariums are caring for healthy corals removed from the reef, with the hope of returning the corals when the SCTLD outbreak subsides.

Nicknamed a “coral ark” after the Biblical story of Noah, this unprecedented effort has never been attempted before.

The Maritime Aquarium is the only aquarium in New England participating in the coral rescue. Guests can view the corals in an exhibit near the sea turtles.

You can learn more about the rescue project here.