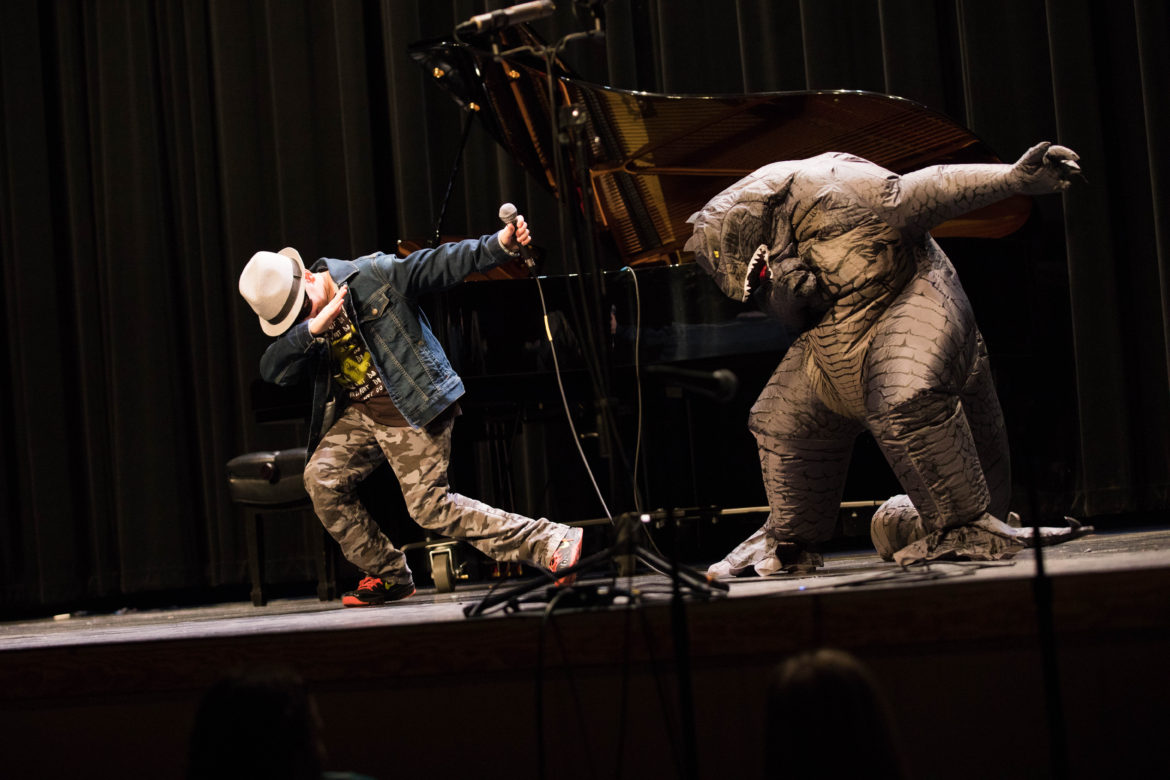 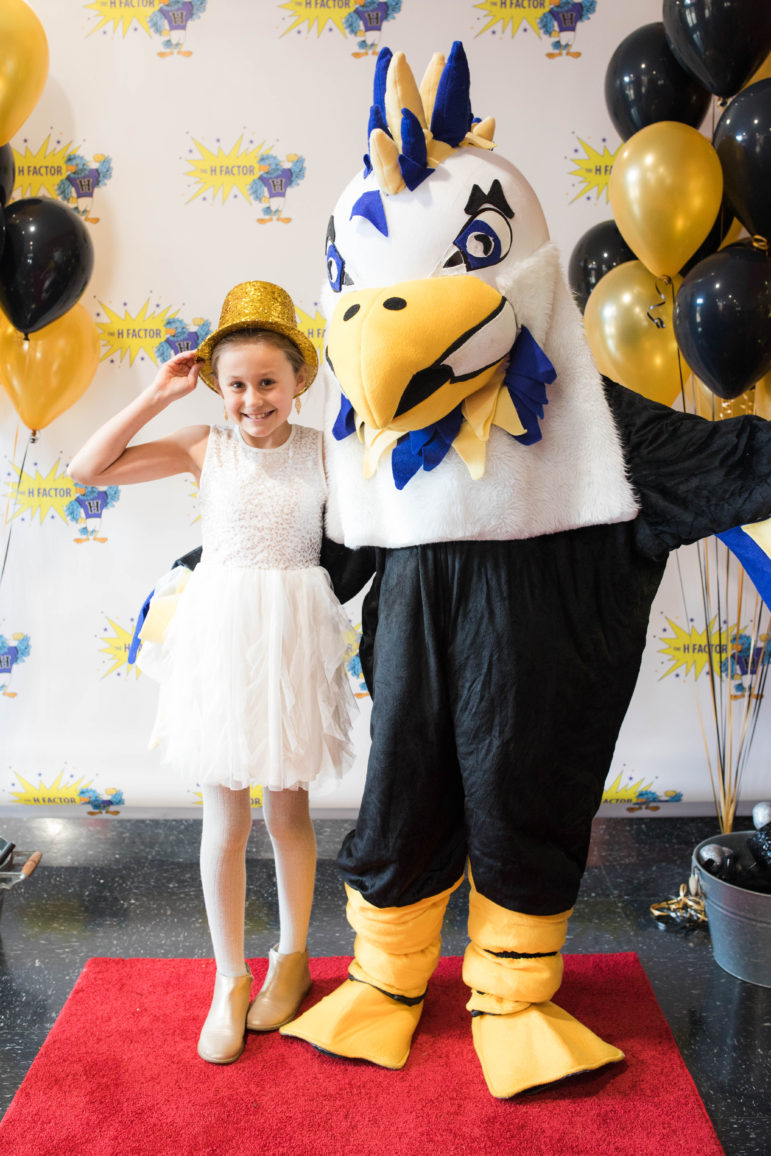 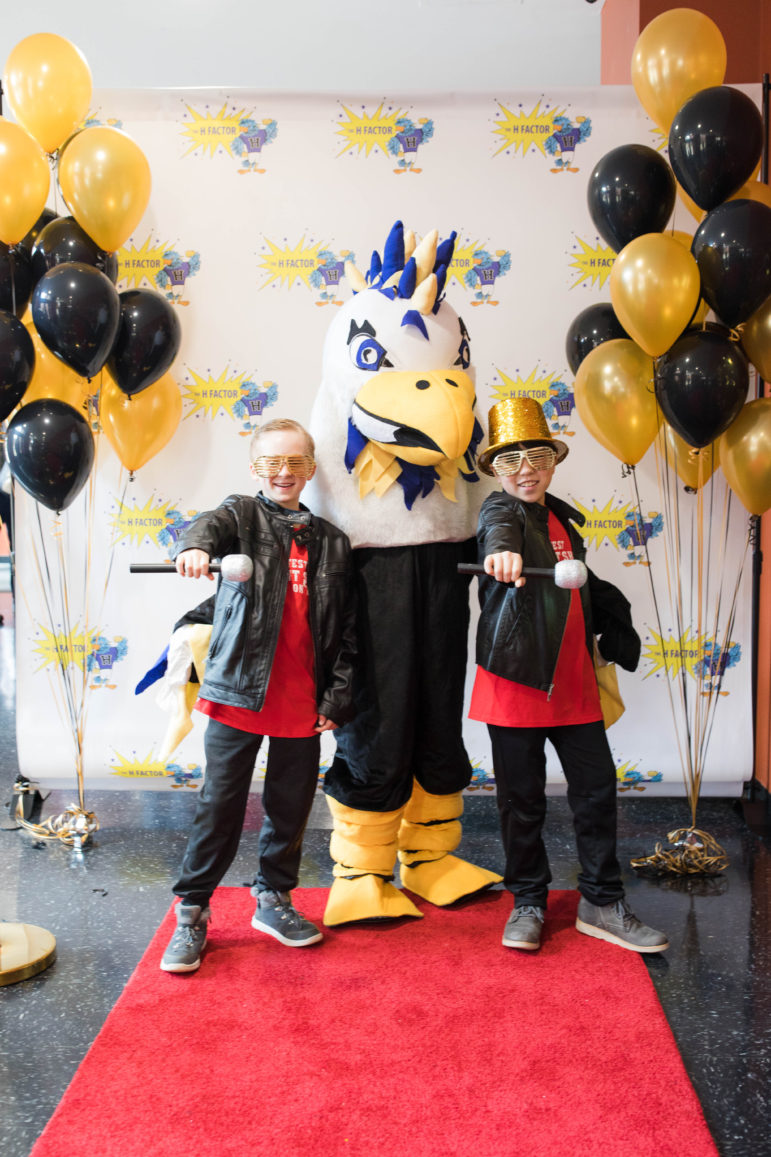 Fourth graders Dylan Woodward and Lukas Tamaye pose on the red carpet before the show. They sang "Believer" by Imagine Dragons.

Fifth graders Savanna Moore and Ariadne Lazaridis dance to "Drag Me Down" by One Direction. 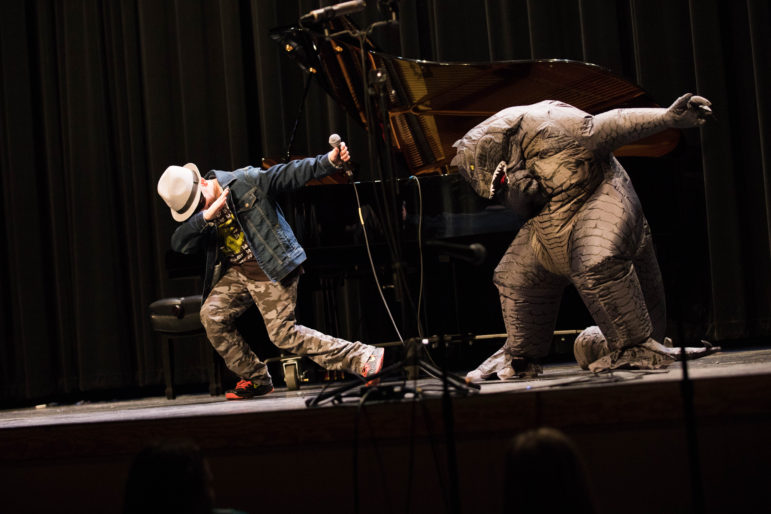 The St. John Church Spring Fling event is on Sunday March 25th , 12:30 to 4:30 at the church, 1986 Post Road. The event is getting bigger and better. The youth group in turn pays it forward throughout the year by donating time, services, help to those in need in the local areas and they also do healthy social events for the middle school and high school kids.

Doug Allen will be singing, and there will be pony rides, a petting zoo, face painting, games, a caricaturist, a photo booth, a bouncy house and food trucks from Bluewave Taco and Chez Lenard.

Vendors at the event will include Touchstone Crystal by Swarovski , Nantucket Monogram, Rodan and Fields, Jewelry by Katie, Chocolate Works, Dom’s. All proceeds go to the youth group!

KEYS (Kids Empowered by Your Support), which provides free music instrument instruction to Bridgeport students has named Darien resident Bill Durkin to the organization’s Board of Directors. 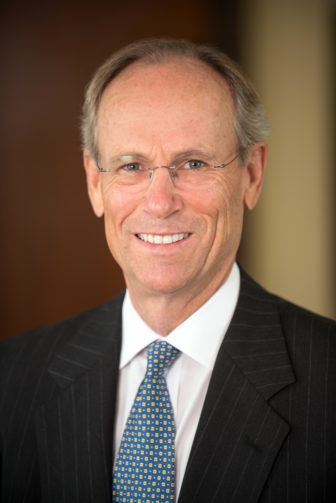 Bill is past president of the Fairfield County Bar Association and member of the Association’s Board of Directors. He is managing partner of the law firm Diserio Martin O’Connor & Castiglioni, LLP, specializing in corporate law and commercial real estate.

He advises clients in mergers and acquisitions, equity and debt financings, and general business matters, and represents owners, lenders and tenants in commercial real estate transactions.

He previously served as the chair of the Board of Trustees of the Brunswick School in Greenwich. He is also a former trustee of the Darien Library and Stamford Symphony.

Bill currently serves as board member and finance chair of the Talmadge Hill Community Church. He resides in Darien with his wife, Martha.

KEYS’ mission is to bring one-to-one instrument lessons and group music instruction to underserved inner-city children in Bridgeport who have no other access to this empowering life experience. For more information, email KEYS Assistant Executive Director, Laurie Bradbury at aed@keysmusic.org. 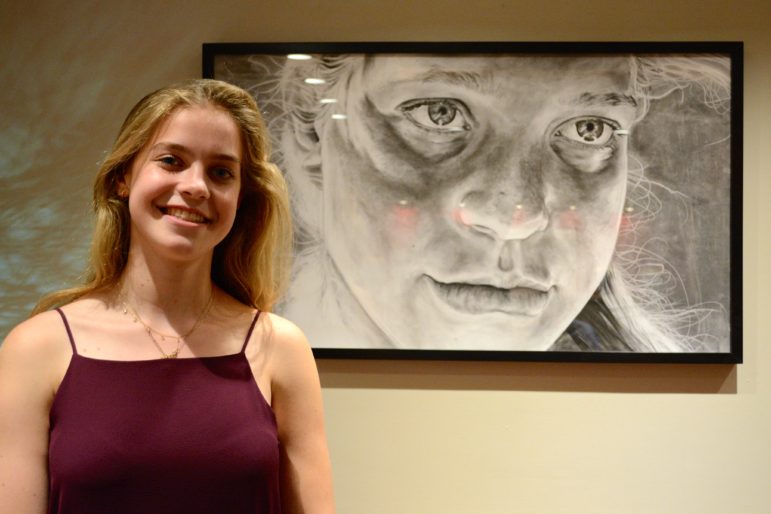 Applications are now being accepted for the Ginny Wright Scholarship, given in memory of Virginia Wright to a Darien High School senior who plans to continue his or her study of art in college. Applications & portfolios are due April 5, 2018. For application forms and more information, visit darienarts.org or call the DAC office at (203) 655-8683. Pictured is 2017 Ginny Wright Scholarship winner Courtney Lowe with her artwork 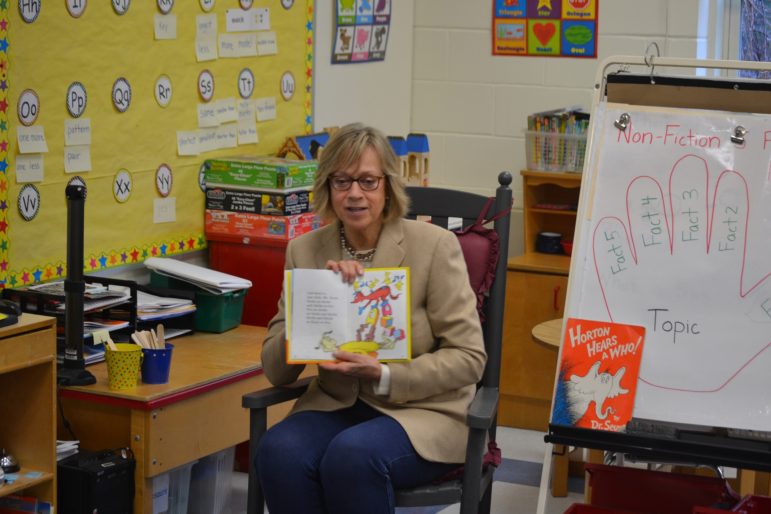 State Representative Terrie Wood (R-141) visited Royle School in Darien to read to students in celebration of Read Across America Day. Read Across America Day is a nationwide reading celebration that takes place annually on March 2nd, which is Dr. Seuss’ birthday, with the goal of sharing the joy of reading with elementary schoolers. Rep. Wood read a Dr. Seuss book to a class at Royle School. 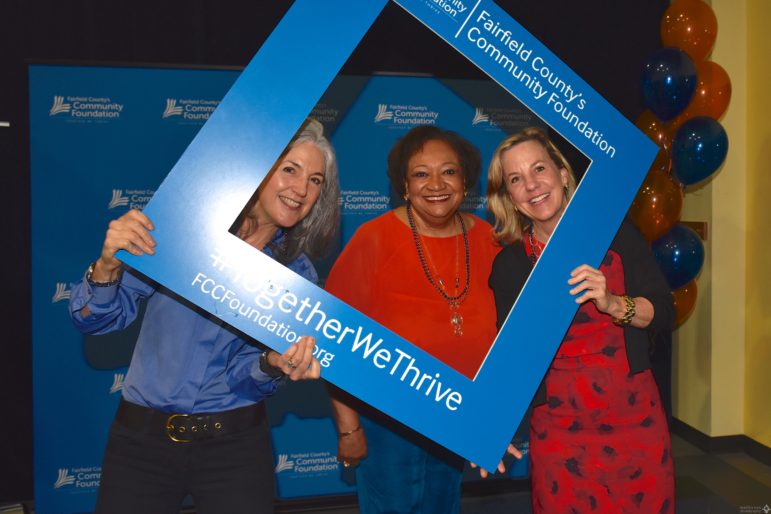 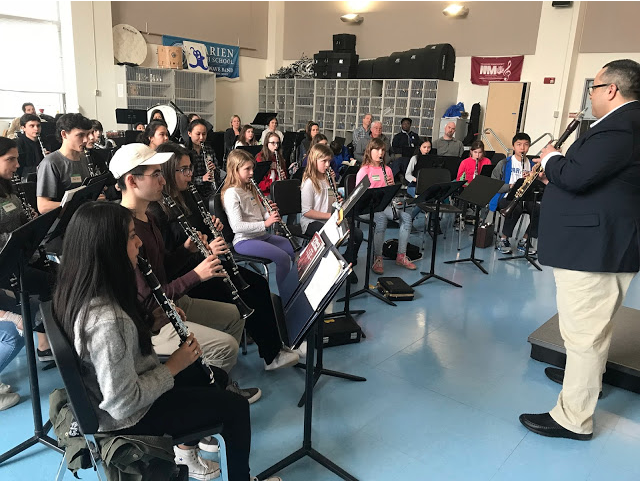 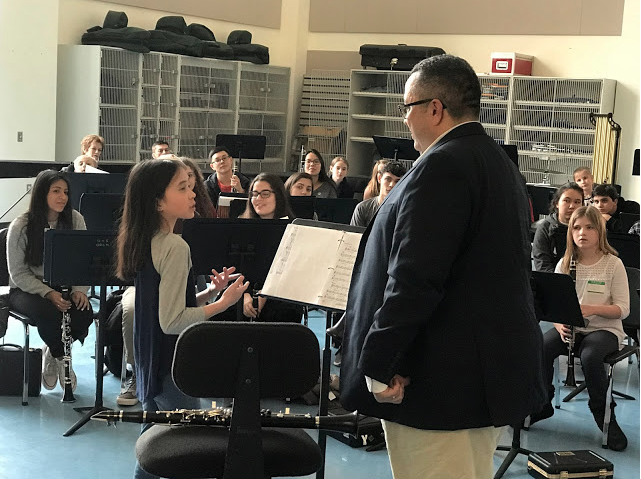 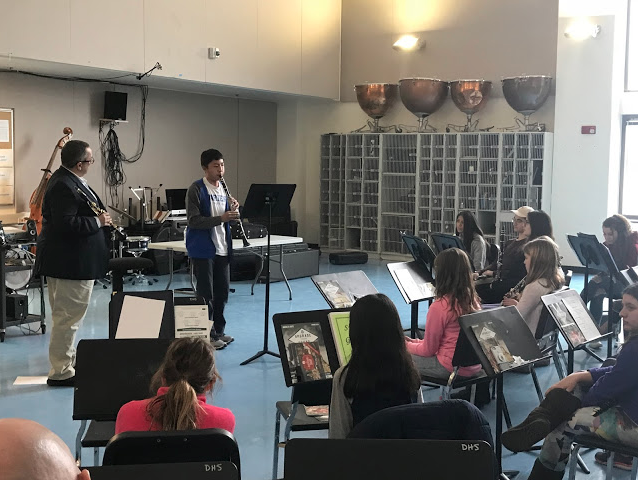 An announcement from the Darien Monuments and Ceremonies Commission:

If your organization participates or wishes to participate in the 2018 Darien Memorial Day Parade, the Darien Monuments and Ceremonies Commission requires you to update your contact information.

Specifically, we need your organization name, current contact name of the person who will handle communications, this person’s email, mailing address and phone number. Please send this information to 06820mayparade@gmail.com by March 31.

We are looking forward to another successful Parade, and Memorial Day Ceremony following the Parade at the monument in Spring Grove Veterans Cemetery. Thank you in advance for your cooperation in sending this information. This will ensure that your organization is included in all mailings and notifications. 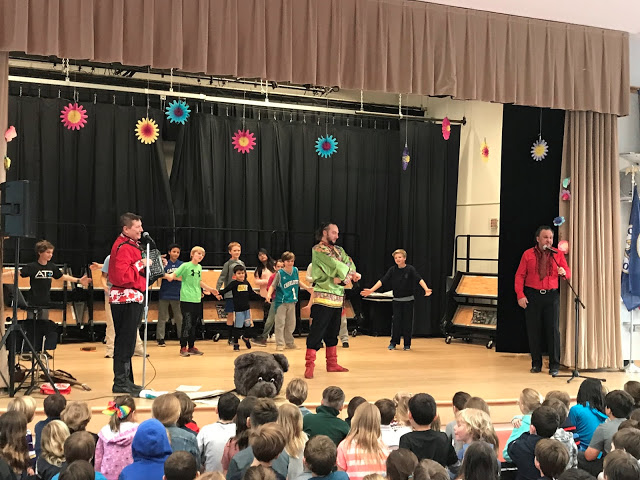 Photo and caption from the Darien Music Department

Members of the Barnya Russian Music Ensemble performed for students at all of the elementary schools in Darien over the past two weeks [as of March 14]. In the picture above they are sharing Russian Folk Songs, Dances, Stories, and language with the students at Tokeneke School. The full Barynya 20+ member ensemble, made up of singers, dancers and musicians, will be performing at the Darien High School auditorium in a free public concert on Tuesday, April 17 at 7 p.m. The Barynya performances are possible because of a generous gift from the Darien Music for Youth organization.

Did you know that at Stamford Symphony Orchestra’s Sunday afternoon concerts, kids 17 and under get in for free? There’s a concert coming up April 22. From the symphony’s website: 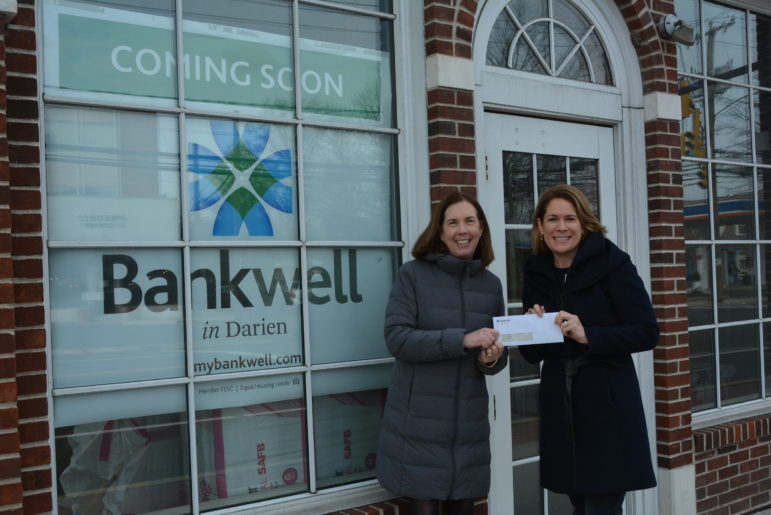 Bankwell is a proud sponsor of the fourth Darien House Tour which will take place on June 8th. The event will benefit more than 20 local not for profits that serve the disadvantaged, our youth and the elderly, such as Pacific House, which has been selected as our lead beneficiary. More about the tour can be found at darienhousetour.org. Bankwell is a community bank whose mission is to provide outstanding service and give back to the communities it serves. The bank will be opening a new branch at 1063 Post Road in Darien this spring. More about Bankwell can be found at mybankwell.com.

Person-to-Person received a $400,000 grant from the Steven & Alexandra Cohen Foundation to support the new P2P Mobile Food Pantry in Stamford.

Noting that there is a high rate of food insecurity in Stamford, P2P Executive Director Ceci Maher says that giving more people the opportunity to select free grocery items – including fresh produce, dairy items, meat and poultry, and canned goods – will help address that need.

“We will be able to serve more residents of the city than we can currently accommodate in our Darien office, up to 40 additional families daily, with casework counseling and emergency financial assistance.

This also increases our collaboration with partner agencies in Stamford, at which the Mobile Food Pantry will be stationed during the week, and makes our services and programs available to people right in their own neighborhoods.”

Maher says that the Mobile Food Pantry is, essentially, ‘P2P on Wheels’ because it allows the agency to deliver its services where they are needed most. “The support from the Cohen Foundation is invaluable and demonstrates once again its commitment to funding initiatives that benefit individuals and families who are struggling to make ends meet.”

The Cohen Foundation has been a longstanding and generous supporter of P2P, providing funding for the agency’s 2013 expansion into Norwalk, underwriting the purchase of a new box truck in 2016 and now making this grant for the Mobile Food Pantry.

Thanks in part to a generous donation by Darien-based Ring’s End Inc, children are tinkering, creating and making all school year long at Norwalk’s Stepping Stones Museum for Children. 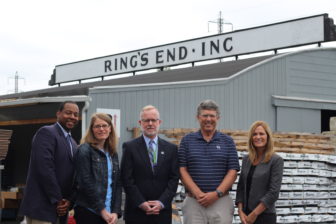 Ring’s End President & CEO David Campbell, fourth from the left, with Stepping Stones Museum officials at a warmer time of the year.

The wildly-popular Mega Making exhibit returned to the museum in September, blending learning and play in a unique, hands-on manner that celebrates the creativity in our children.

Featured at Stepping Stones during the summer months in 2015 and 2016, the expanded, new-and-improved Mega Making experience is being hosted until Labor Day during this stint at the museum to allow school groups to put their students’ building and making skills to the test during school visits.

Ring’s End is the primary sponsor, and support was also received from First County Bank.

“Stepping Stones Museum is a wonderful asset to the community that we are proud to support,” said David Campbell, president and chief executive officer at Ring’s End, Inc. “It’s great to see children using real materials and tools and taking a hands-on approach to learning in the Mega Making exhibit.”

Mega Making was designed by Stepping Stones to celebrate creativity in all children. The Mega Making experience is organized into a four main areas:

Helpful staff members will be there to lend a hand, whether it’s working a needle and thread for the first time, practicing using wrenches and screwdrivers, taking a part a used computer keyboard, tinkering with batteries and buzzers or picking out the perfect artist medium.

“We want to lay the foundation for lifelong curiosity and innovation,” said Kim Kuta Dring, Director of Learning and Experience. “Making is a learning process. When children and families create something using real materials and tools, they gain a huge sense of accomplishment and confidence. They also learn that mistakes are part of the creative process.”

Making, at its core, is the act of creating something. The current “Maker Movement” in the United States is working to inspire students to become creators of learning rather than passive consumers of learning.

Mega Making takes a constructivist approach to learning by giving adults, children and students the freedom, materials, tools, and support to build 21st Century skills including flexibility and adaptability; initiative and self-direction; critical thinking and problem solving; and creativity and innovation.