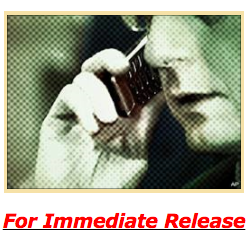 You get a call from someone purporting to be an official, or even someone in law enforcement, who demands that you pay a tax bill or face dire consequences — and the caller is demanding that money now.

That’s what happened to a Darien resident who recently received a call from someone purporting to be a police officer — and Caller I.D. indicated the call was coming from the Darien Police Department.

THAT’S how clever these scammers can be. Darien police just issued a warning about it.

Here’s an announcement from Darien police about the problem and the incident:

The Darien Police Department would like to warn residents about a sophisticated phone scam that is targeting taxpayers not only in Darien, but throughout the country.

Victims receive a phone call and are told they owe money to the IRS and it must be paid promptly through a pre-loaded debit card or wire transfer. During the conversation the caller obtains the victim’s home address.

If the victim refuses to cooperate, they are then threatened with arrest, deportation, or suspension of a business or driver’s license. In many cases, the caller becomes hostile and insulting.

After threatening victims with jail time or driver’s license revocation, scammers hang up and others soon call back pretending to be from the local police or DMV, and the caller ID supports their claim.

In a recent incident in Darien, a potential victim was contacted by someone claiming they were a Darien police officer who then threatened the victim with arrest.  The scam was so complex that the caller I.D. was actually “spoofed,” and displayed the actual phone number to the Darien Police Department.

Taxpayers need to be aware so they can help protect themselves.  The IRS does not and will not ask for credit card numbers over the phone, nor request a pre-paid debit card or wire transfer.

If someone unexpectedly calls claiming to be from the IRS and threatens police arrest, deportation or license revocation if you don’t pay immediately, that is a sign that it really isn’t the IRS calling.  The first IRS contact with taxpayers on a tax issue is likely to occur via mail.

Other characteristics of this scam include:

If you get a phone call from someone claiming to be from the IRS, here’s what you should do:

Darienite.com editorial: Darien police say they wanted to let the public know about this, and on Thursday they put the above announcement on their website, complete with the words “Immediate Release” on the top, in red italics. But they didn’t send out a news release on it.

The most charitable explanation for this repeated behavior is incompetence. We’ll say it’s incompetence on the part of town government in general rather than try to point fingers. It’s only happened a couple of times with police announcements like this. It happens more frequently with Police Commission postings about meetings.