Gerald Otto Strauch, M.D., was born into eternal life on Jan. 2, 2022 after an extremely full, productive and wonderful life. 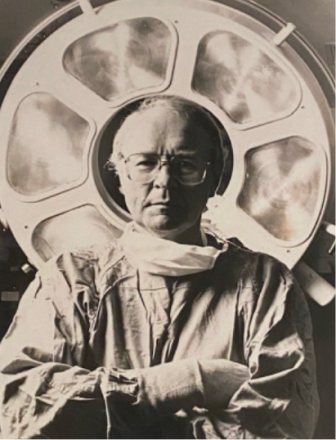 He followed quickly on the heels of his beloved wife, Margie, who left us just over four months ago on Aug. 24.

Theirs was a marriage of love, devotion and respect, the likes of which we seldom hear and which lasted 66 years. Their life together was full of laughter, dancing, annual vacations with treasured friends and world travel.

Our dad, Jerry, was born in Three Rivers, Michigan on July 26, 1932. He grew up in East Grand Rapids and dreamed of going to the University of Michigan.

When, in high school, his parents and four siblings moved to California, Dad stayed with a family in East Grand Rapids to maintain Michigan residency and secure in-state tuition. He paid for most of his tuition himself by playing the piano, bussing tables at sororities and doing other odd jobs.

During his freshman year of college, Dad took a comparative religions class and thought that Catholicism might be for him. After a priest answered his questions, he converted. He lived by his Catholic faith in everything he did. He was honest to a fault and kneeled down every night to say his prayers until his knees could no longer cooperate.

In his sophomore year at Michigan, Dad met the love of his life, Margie Spindler. Even before they married, friends admired their harmonious relationship and mutual respect. They married in Darien on Aug. 20, 1955 and then returned to Ann Arbor for Dad to complete medical school.

His residency in general surgery was done at Rhode Island Hospital, after which Dad served in the army for two years at Valley Forge Hospital in Phoenixville, Pennsylvania. There he treated some of the first American casualties arriving stateside from the Vietnam War.

In 1964, Mom and Dad moved to Darien to raise their family and Dad began private practice at Stamford Hospital. His specialty was trauma, and sometimes he came home with cool stories like sticking his finger in an internal wound to stop the bleeding as a patient was being wheeled into the operating room. How he loved his job!

While in Darien, Dad helped as a consultant to establish Post 53 (later Darien EMS-Post 53).

Dad loved to teach, and in 1979 he took a job as chief of surgery at New Britain General Hospital and moved his family to Farmington. “Apple Hill” was our home for the next eight years.

During that time, Dad helped to establish a registry of trauma surgeons that could best assist the President of the United States in case of an emergency. This eﬀort was inspired by the assassination attempt on Ronald Reagan. Dad loved his country, and White House meetings with Ronald Reagan and George Bush were career highlights.

In 1987, Dad became the associate director of the American College of Surgeons and continued teaching by arranging advanced trauma and life support courses for physicians around the world.

He worked hard, but he also knew how to have fun. On his lunch hours at the college, he played piano for diners at the restaurant downstairs. He even got noticed and ended up playing for a function at the Democratic National Convention when it came to Chicago.

As much as Dad loved his career, he loved his wife and children so much more. When we were kids, he’d take a short nap after work and then spend the rest of the evening with his family. He loved us and we knew it.

Our parents celebrated their 50th wedding anniversary by taking their children and grandchildren on an Alaskan cruise. It’s still the best trip any of us have experienced.

Dad was a superb listener and advisor, but he never told us what to do. We will miss him immensely but are comforted by the love he shared with our mother and showered on us. May he rest in peace.

Jerry is survived by his three children: David, Susan (Manglano) and Jean (Myers), and his six grandchildren: Allie and Andrew Strauch; David, Ramon and Santi Manglano, and Christopher Myers.

— an obituary from Donnellan Family Funeral Home, where online condolences may be left